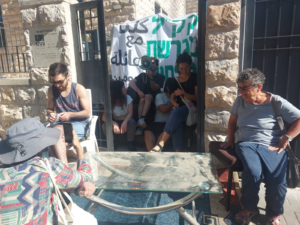 Without prior notice to Masafer Yatta’s Palestinian inhabitants, the army conducted maneuvers which included live fire close to the villages, tanks moving across tended fields, blocking access roads to villages and confiscation of Palestinian vehicles, whereas cars belonging to colonists were allowed through the various checkpoints; Soldiers shackled a 70-years-old man in the South Hebron Hills and held him hostage in order to force his son to turn in a ‘mashtuba’ (jalopy) car; 4 activists were arrested while attempting to protest landgrab of En Al Beda lands, and a disabled Palestinian was detained; A colonist threw carcasses of sheep from his flock – quarantined because of pox epidemic – in Palestinian grazing grounds near Tha’ale; The occupation army joined outpost colonists in their efforts to drive away Palestinian shepherds and flocks from the Auja area; Activists spent nights in Samara (northern Palestinian Jordan Valley) after two days of colonist invasions to the village; Right-wing thugs are escalating their assault on Sheikh Jarrah – the Jerusalem police reacted by detaining neighborhood residents and activists; Protest action at the JNF offices against Judaizing East Jerusalem and the eviction of the Sumarin family from its Silwan home, whose case was brought before the Supreme Court, where the jusitces instructed the state to clarify its directives in declaring absentee property; Widespread demolitions in Jerusalem and throughout the West bank –the occupation forces demolished 19 structures in Ibzik and 13 in A-Tayube (Hebron district), among others

South Hebron Hills
On Sunday, June 26, Palestinian Prime Minister visited the Masafer Yatta region, whose Palestinian inhabitants are threatened with transfer. Immediately following the visit, an occupation army helicopter began practicing landings and takeoffs in tended fields and alongside flocks grazing near Majaz. On Monday, June 27, the army began its maneuvers with what it defined as ‘light arms’. The Palestinian inhabitants received no prior notice and were informed only after the maneuvres had already begun. Main roads in the area were blocked. Tanks and other heavy equipment drove over tended fields and damaged the crops remaining there. The maneuvers lasted all through the next day, Tuesday, when the army blocked main roads and prevented Palestinians from getting home or leaving to attend their fields and workplaces. The army did allow passage of colonists through checkpoints closed to Palestinians. A car belonging to activists was confiscated and two activists were detained for 8 hours without water or shelter. Palestinian shepherds and their flocks were chased away from grazing grounds. A patrol held the next day by activists and locals yielded dozens of bullets, casings, posts and targets placed in tended fields, and damages caused by tanks, APCs and D9 bulldozers.
On Saturday evening, July 2, while chasing a mashtuba (jalopy) car in Masafer Yatta. (14 such cars have already been confiscated in the area since the Supreme Court enabled the army to declare this a ‘firing zone’) soldiers caught a 70-year-old Palestinian near Khalat A-Dab’a and held him hostage in their vehicle for hours, until his son came and surrendered the jalopy. Another car was confiscated that night near Mufaqara.
On June 30, New York’s Times Square saw a demonstration in protest and solidarity with the Palestinian inhabitants of Masafer Yatta. The Israel Association for Civil Rights lodged a complaint with the State Attorney about the army’s maneuvers among a civilian population.
In En Al Beda, colonists continued their earth works in preparation of a road built on Palestinian land. On Friday, July 1, the army prevented villagers and activists from arriving at the protest demonstration against colonist landgrab, using a pre-prepared ‘closed military zone’ order. 4 activists were detained. A disabled Palestinian activist was detained but released on the ground. The other activists were questioned at the Hebron police station and released with a distancing order.
At the beginning of the week, shepherds from Tha’ale and other communities in the area discovered that the colonist from the nearby outpost had thrown into their grazing grounds carcasses of sheep from his quarantined flock, infected with the pox. Activists documented carcasses that had an identifying tag of the Israeli Ministry of Health.
On Wednesday, June 29, a Palestinian family out to plant trees in a grove it owns near Susya was blocked by colonists, army and police. The Palestinian landowners were distanced with a ‘closed military zone’ order. Vast colonist invasions into privately owned Palestinian lands nearby were discovered.
On Thursday, June 30, the occupation forces destroyed farm buildings in Al Refa’iya’ and Bawayeb, where vehicles were also confiscated, and orders of ‘cessation of work’ were issued in Karmil and Ma’in.
Soldiers detained Palestinian activists and journalists in Umm Al Kheir on Friday, claiming that they had photographed ‘Carmel’ colony – an action that is not illegal in any way.
Activists accompanied Palestinian shepherds and farmers in the region all week, and on Saturday joined the landowner in Umm Al Arais on his weekly visit to his lands with his family.

Palestinian Jordan Valley
In Auja in the southern Valley, the Israeli army was on hand this week again to chase away Palestinian flocks from their grazing grounds without any authority to do so, at the bidding of outpost colonists who at the same time invaded tended Palestinian fields in the area with their flocks. This military action, documented on Sunday, continued the next day at the instruction of a right-wing activist who also followed the activists on the ground and harassed them. The activists went later to protest in front of the nearby army base. During the rest of the week, shepherds were accompanied by activists around Auja without special incident.
On Sunday, June 26, activists joined farm works by local villagers of Deir Jarayer, on the West Bank Hill Range, close to the ‘dismantled’ outpost of ‘Ma’ale Ahuviya’, while the young ‘hill thugs’ watched. On Monday the activists documented the invasions of colonists and their flocks into privately owned and tended Palestinian fields. On Tuesday, as well, a flock from ‘Ma’ale Ahuviya’ invaded Palestinian grounds. That day, terrorists from the outpost injured activists who had documented them stealing from a Palestinian field.
Colonists, accompanied by their ‘security official’, invaded Samara (northern Valley) in the morning, noon and night of Wednesday June 29. They drove around inside the village and interrogated an elderly woman. The next day, Thursday, three official ‘security’ vehicles returned there. In view of this, and at the request of the villagers, activists came to spend the night at Samara on Thursday, Friday and Saturday.
Activists accompanied shepherds in Khalat Makhoul, Hamra and Mlihat without special incidents.

Jerusalem
This week, too, Jerusalem police intensified ethnically its campaign to ethnically cleanse the neighborhood of Silwan. On Sunday, policemen raided a greengrocer’s shop, smashed its contents and fined the owner; his neighbors rallied to support him financially. The next day, policemen with dogs raided homes in the neighborhood and caused much damage. On Wednesday they raided the Batan Al Hawa area in an operation to remove Palestine flags. On Thursday, June 30, the occupation forces uprooted trees on the land of a family from the village in Wadi Rababa, aka. Gay Ben Hinom.
On Sunday, the occupation forces raided Al Muqassad Hospital.
On Monday, June 27, activists held a protest vigil at the entrance to offices of the ‘Himnuta’ JNF’s subsidiary, who specialize in Judaizing East Jerusalem, against their intent to evict the Sumarin family from its Silwan home. The vigil was dispersed by the police. On Wednesday, dozens of demonstrators protested outside the Supreme Court during its session on the eviction of the Sumarin family. The justices ended the session with a demand to the state to proclaim its procedures for defining absentee property.
On Tuesday, June 28, the police instructed that all shops in Al Wad Street in the old city be shut down in view of the ‘Monthly Flags Parade’ to be held there by right-wing thugs. A Palestinian youth tried to stab a policeman at the entrance to Al Aqsa and escaped into the mosques compound. Large forces raided the area and searched. There were no casualties. At the same time, the police violently dispersed residents and passersby at the Damascus Gate area.
Violent police raids were held this week too in the Issawiya and Jabal Mukabar neighborhoods.
On Wednesday, policemen arrested a couple from Sur Bahr because of a problem with their permits, making them leave their baby alone in the car.
In preparation of the upcoming elections, right-wing thugs and colonists are escalating their assaults on Sheikh Jarrah. During the weekly protest vigil there last Friday, the Judeo-Nazis intensified their cursing, pushing, flag-stealing and blatant sexual harassment of activists and residents. The policemen present chose to ignore this, and arrested instead 5 left-wing activists and residents, among them 2 Palestinian minors whose arrest has now been extended until Monday July 4. Others were released that evening with restraining orders. On Saturday night, a protest vigil was held in front of the Magistrates Court against the prolonged detention of the minors.

This entry was posted on Sunday, July 3rd, 2022 at 18:32 and is filed under Activities, English. You can follow any responses to this entry through the RSS 2.0 feed. Both comments and pings are currently closed.