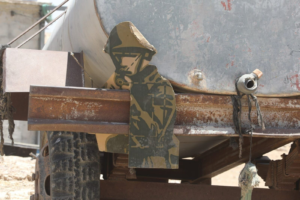 *
*
*
South Hebron Hills
On Monday, June 20, the Israeli high court rejected the petition presented by Masafer Yatta’s communities for an interim injunction against army maneuvers in the area of their villages. The next day, Tuesday, soldiers placed targets between houses in Majaz (on a water tank, among others) and instructed the villagers to shut themselves inside the houses in the afternoon, when traffic of military vehicles, tanks and soldiers began, and a tank shell exploded near the village. Tanks trampled tended fields and came as close as 100 meters to the houses. The maneuvers continued on Wednesday, including tank fire around the villages of Fakhit and Mirkaz. The army blocked roads in the area and tried to prevent activists and journalists from arriving on the scene to document it. Two activists were detained. At night, the army came to Khalat A-Dab’a and demanded the dismantling of tents and a TV studio that was erected there for the duration of the maneuvers. On Thursday, the occupation forces confiscated the vehicle of a camera crew from the international aid organization of St. Yves. Israeli journalists who came out to tour the area were also detained for two hours and threated that their car will be confiscated. On Friday, a British delegation headed by the Minister of Asia and Middle East Affairs managed to reach Khalat A-Dab’a and released a video: https://fb.watch/dRHQsF0nN3/
The army’s fervent activity this week towards transferring the Palestinian communities of Masafer Yatta also included blocking vehicle passage and detaining villagers on their way home, issuing demolition orders in Umm Darit, Sha’ab A-Botom and ‘cessation of work’ orders (with legal notice against ‘ruining archeological findings’) in Ma’in. The army is now conducting new earthworks near Jinba
Colonists aided by the Israeli army continue to take over En Al Beda lands. On Monday evening, masked colonists armed with clubs and stones arrived there. The army arrived too and tried to drive away activists and villagers without an official order, detaining 3 activists with the fantastic claim of ‘trespassing state land’. They were freed with a warning. The next day, June 21, colonists and soldiers chased away shepherds from En Al Beda, the police refused to get involved and threatened the shepherds with detention. The colonists, on the other hand, continued that day and the next unhampered in their works to open a new road, invading privately owned lands, secured by soldiers and police. On Saturday evening, colonists invaded tended Palestinian fields in En Al Beda and a colonist was reported firing his weapon. The army chased away the Palestinian shepherds and their flocks, as well as the Palestinian landowners and activists, by declaring the area a ‘closed military zone’.
Colonists and their flocks invaded Humra land near the village of Tawane on Sunday, but left when activists arrived. On Wednesday, again, a colonist with his flock invaded the olive tree grove in Humra, in an area officially closed to Israelis, and activists distanced him. Another invasion of the area was reported on Saturday evening.
On Wednesday, ‘Susya’ colony’s security officer tried to chase away shepherds from Wadi J’heish (Susya) from privately owned Palestinian lands, and the next day, June 23, a Palestinian flock was dispersed by means of a drone flown by colonists.
On Saturday, a colonist with a donkey invaded Atariya lands and tried to chase away a shepherd and his flock, but he ran away when activists summoned the police. Activists also accompanied shepherds and farmers this week in Umm Al Arais and Umm Al Imad.
On Tuesday, June 21, demolition orders were issued for two large structures in Dirat.

Palestinian Jordan Valley and the West Bank Hill Range
In blatant contrast to reports by Israeli mass-media of ‘clashes’ between the army and ‘Palestinians who assaulted a colonist’ in the Auja area last Saturday, June 18, this week it was made clear that the Palestinian shepherds from Mu’arajat were the ones who were attacked by a gang of terrorists from the new illegal outpost in the area. 4 Palestinians were wounded and hospitalized, and 4 detained. A 74-years-old Mu’arajat villager was hospitalized with wounds to his head, back and arm. He and others gave testimony that soldiers had shackled him and threatened him with a gun while the outpost terrorists beat him up. A 14-year-old boy with a broken arm said a colonist had twisted his arm behind his back until it broke. Activists accompanied one of the attacked Palestinians to the police station on Tuesday.
On Sunday, June 19, 4 masked colonists from the outpost near ‘Mevo’ot Yericho’ attacked a vehicle of activists accompanying shepherds from Mu’arajat, near Auja. The activists managed to rescue themselves and an army force that arrived at the site distanced the colonists. The next day, Monday, a right-wing thug (apparently belonging to the ‘Im Tirzu’ organization) came to grazing grounds around Auja and harassed activists accompanying Palestinian shepherds. On Friday, the army drove away several shepherds and flocks from their grazing grounds. On Saturday, activists managed to prevent another attempt by the army to chase away Palestinian shepherds.
In the northern Palestinian Jordan Valley, Palestinian shepherds were accompanied all days this week in Hamra and Khalat Makhoul, where on Wednesday, June 22, a colonist and his flock invaded privately owned and tended Palestinian lands, that had not yet been harvested. Activists summoned the police. The army arriving on the scene chased away everyone, claiming this was a ‘closed military zone’, and also confiscated a Palestinian truck loading harvested grain. On Monday, June 20, a Palestinian shepherd reported that the police forbade him to come water his flock at the spring of En Sukut, where colonists’ construction works had been recently resumed.
A gang of about 60 terrorists came out of the terrorist outpost ‘Adei Ad’ on Saturday and assaulted Palestinian working in the lands of Mughayer village, on the West Bank Hill Range, inside Area B. The terrorists used clubs, wounding two workers, and burned a bugger and two cars. A military force arrived on the scene but made no arrests among the assailants. On Tuesday and Saturday, activists documented colonist invasions with their flocks into privately owned Palestinian fields near Tayibe junction and Deir Jarayer. Activists conducted a tour with local inhabitants around Fasail on Sunday, June 10.

Jerusalem
A Palestinian bus driver was attacked by Jewish terrorists on Bar Ilan Road on Tuesday, June 21, and hospitalized. The next day, a gang of Jewish thugs attacked a Palestinian woman with a headkerchief, who ran away and had to ask passersby to get the bags she had left at the station when attacked.
The weekly protest vigil in Sheikh Jarrah was held on Friday under harassment from right-wing thugs and ‘white shirts’.
On Wednesday, June 29, at 8:30 a.m., a demonstration will be held at the entrance to the Supreme Court prior to the session on evicting the Sumarin family from its Silwan home, demanding to stop the ethnic cleansing that the ‘Himanuta’ KKL subsidiary is conducting in the Silwan neighborhood.

Demolitions in Jerusalem
The occupation forces demolished 5 structures in Anata, issued demolition orders for 25 more commercial structures there, demolished a house in Issawiya and issued a demolition order for the home of a 30-person family in Silwan – all of this on Wednesday, June 22.

Additional demolitions throughout the West Bank
4 houses in Nahalin (Bethlehem district), and 2 in Ni’alin (Ramallah district) – these, too, on Wednesday, June 22

This entry was posted on Sunday, June 26th, 2022 at 18:26 and is filed under Activities, English. You can follow any responses to this entry through the RSS 2.0 feed. Both comments and pings are currently closed.