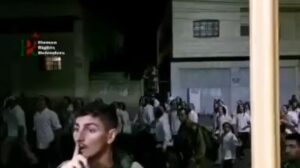 *
*
*
South Hebron Hills
The occupation forces are rapidly advancing the transfer of the Palestinian communities of Massafer Yatta, following the Supreme Court ruling that has legitimized the declaration of ‘military training zone 918’ on the area. The army notified the inhabitants that from Monday to Wednesday (June 20-22) it will conduct maneuvers involving live fire and the presence of tanks right next to homes in the communities of Jinba, Markaz, Halawa, Fakhit, Taban, Simra and Khalat A-Dab’a. At the same time, demolition orders were presented to 20 homes in Khalat A-Dab’a (most of the village), as well as orders to cease works in Rakiz. A tour held by activists in the area on Tuesday ran into a large concentration of heavy equipment at the expanded army base near Markaz. The next day, June 15, a new checkpoint was set up between Taban and Fakhit. On Saturday, June 18, a new roadblock was manned on the main road of the area, and the army prevented an aid organization team from getting to Mughayer Al Abid, and late at night military checkpoints were placed at the entrances to Tawane, Khalat A-Dab’a and Simra.
Earth works to prepare for colonist takeover continued this week in En Al Beda lands. In clashes between the Palestinian landowners and the colonists on Wednesday, a colonist was hit in the head by a stone. That day, 80 olive trees were vandalized in a Palestinian grove in this area. At night, the army raided the nearby village of Jawiya and conducted searches in houses; next morning, the force returned and arrested a disabled Palestinian with an amputated hand, who was released in the evening. On Friday, the army violently (and without issuing a a closed military zone order) dispersed a demonstration of villagers and activists protesting landgrab in En Al Beda. Harassment of Palestinians in the area opposite the entrance to the ‘Maon’ colony continued this week: on Sunday night, colonists destroyed a Palestinian structure there, and on Tuesday, shepherds were driven away with the help of the army.
On Sunday, June 12, a colonist with his flock once again invaded fields officially closed to Israelis in the Humra valley near Tawane. The next day, demolition orders were issued for houses in Tawane, and just before midnight an army force invaded the village and fired stun grenades at activists. On Thursday evening, a local activist was detained at the entrance to the village. On Saturday afternoon, boys from the colonist outpost ‘Havat Maon’ threw stones at activists in lands belonging to Humra. The police were summoned, identified the boys by the activists’ photos, but refused to arrest them and demanded that the activists ‘lodge a complaint with the police’.
Colonists invaded privately-owned Palestinian fields officially closed to Israelis in Umm Al Arais on Sunday, June 12, using a mini-bulldozer; they left when activists arrived on the scene. Wednesday evening, June 15, a group of colonists invaded Susya, and an army officer joined them and threatened the villagers with his weapon as they gathered to protect the village’s playground. That day, soldiers arrested a Palestinian near the outpost ‘Havat Talya’ and left him shackled and tied in the sun. On Saturday activists accompanied shepherds in Atariya and chased away a masked colonist youth who harassed the shepherds with curses and threats. That day, a military force came to Sha’ab A-Botom and demanded that a family erecting a structure on its land in Umm Darit destroy it immediately. The family also reported that the police harassed one of its children.
On Friday, June 17, colonists in Hebron attacked an elderly Palestinian who was harvesting his field, which is caged in between the colonies of ‘Kiryat Arba’ and ‘Giv’at Ha-Avot’. He was hospitalized in medium condition with lesions and cuts in his head. The terrorists also attacked his family home that night and the next day, throwing stones and bottles at the windows.
The colonist who threw stones at a vehicle and wounded 2 women-activists on Friday June 10 near the colonist outpost ‘Mitzpe Yair’, in the presence of the commander of the Judea Brigade and his soldiers – was arrested on Sunday, June 12.

Palestinian Jordan Valley and the West Bank Hill Range
On Sunday, in the Auja area of the southern Valley, Palestinian shepherds and their flocks ran into masked colonists from the new outpost near ‘Mevo’ot Yericho’. On Tuesday soldiers, following orders of the Havat Omer colonist, tried to drive away a Palestinian shepherd and his flock without authority, but activists prevented this; The soldiers threatened the shepherd with arrest. The next day, the army kept up its attempts to chase away Palestinian shepherds from two grazing areas, but the presence of activists prevented this. On Thursday, flocks from nearby Ma’arajat came to graze around the Auja junction, after suffering harassment by the colonists of the new outpost near them. On Friday, a colonist on his ATV tried to disperse flocks. On Saturday, the outpost terrorists attacked Ma’arajat – the Palestinian villagers reported 4 wounded persons, and an ATV that ran over a sheep.
In En Al Tin on the West Bank Hill Range, Palestinian villagers reported that colonists together with soldiers raided the community on Tuesday evening (June 14) and the next dawn, and arrested people. The location of the arrestees is yet unknown.
In the northern Valley, all week activists accompanied shepherds unhampered in Hamra and Khalat Makhoul, as well as in Melihat. Activists helped harvest in Samara on Friday, June 17, and in Khalat Makhoul on Saturday, unhampered.

Jerusalem
On Sunday, the occupation forces invaded a home in Silwan where a 14-year-old boy was alone at the time, vandalized property and confiscated the boy’s cell phone. The next day, colonists ran over a boy in this neighborhood and beat him up, and when police arrived and he complained, he was arrested by the policemen and beaten up. On Tuesday, June 14, large forces raided the neighborhood and left 66 Palestinians hurt by teargas; A minor was detained, beaten up, released for medical care and arrested again. On Thursday, June 16, again large forces invaded Silwan using teargas and stun grenades, and conducted two arrests.
On Sunday, inhabitants of the Kufr Akeb neighborhood protested the ongoing neglect of their neighborhood by the municipality, and the severe lack of water. They receive water two days a week, and not enough of it even to fill their water tanks.
The occupation forces raided a family home in the village of Walaja on Monday June 13 – this village was partly annexed to the city of Jerusalem – causing heavy damages and confiscating Palestine flags.
On Wednesday forces raided the Beit Hanina neighborhood and demolished a family home, then raided Sur Bahr and demolished a family home there as well. That day, Wednesday, forces raided Bab Al Amud (the Damascus Gate) in the Old City, destroying stands, vandalizing and confiscating wares.
Two Palestinians, residents of Beit Hanina, were attacked on Thursday, June 16, by Jewish terrorists with sticks and knives on Bar Ilan Road. The police arrived late and arrested no one – except the attacked Palestinians who were then released to be hospitalized. They suffered dozens of lesions and cuts. A Palestinian driver was attacked by Jews on Saturday while driving in East Jerusalem. Damages were caused to his vehicle.
During the weekly protest vigil in Sheikh Jarrah on Friday, the police violently pushed the the demonstrators out of the Salem family yard (the family threated with eviction) while enabling gangs of colonists and right-wing thugs to remain there, threaten, push and curse the residents and activists.
On Saturday, June 18, Jewish terrorists fired live bullets at the community center of Burj Al Kalak in the Old City. There were no casualties.
* former police accusations of an attack on Thursday, June 9, in Issawiya of 2 policemen, who drove by mistake into the neighborhood, were clarified this week: the policemen arrived there in civilian clothes, they were drunk, and one of them fired 17 bullets outside a mourners’ tent.

A compendium of anti-occupation activists’ reports throughout the West Bank:
On Friday, June 17, dozens of activists came to Bourin village (Nablus district) to help Palestinian landowners tend their fields, which are under an ongoing terrorist onslaught (including burning olive trees and targeting farmers) by the colonists from ‘Giv’at Ronen’ outpost, overlooking the village. The army has declared a closed military zone and attacked the activists firing sponge bullets and teargas. Three activists and two paramedics were wounded and hospitalized, a journalist was wounded by beatings, many others sufferd choking from the gas. The terrorists of ‘Giv’at Ronen’ observed the army at work from their stronghod on the top of the hill.
That day, activists came to Huwwara (Nablus district) too, to protest against the forced removal of Palestine flags from the town’s streets. The army dispersed the protestors with severe violence, prevented them from takking videos, arrested an activist and left wounded people behind.

***
Left-wing organizations held a demonstration in Tel Aviv on Saturday, June 18, in protest of 55 years of occupation. A right-wing scooter rider ran over two sisters who were being photographed with a Palestine flag, and wounded them.

The first year of the present Bennet-Lapid government has seen the number of Palestinians killed in clashes with the occupation forces throughout the West Bank rise by 60% in comparison with last year.

This entry was posted on Sunday, June 19th, 2022 at 18:16 and is filed under Activities, English. You can follow any responses to this entry through the RSS 2.0 feed. Both comments and pings are currently closed.