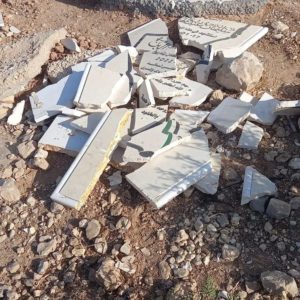 Activists protesting the Masafer Yatta transfer were attacked with stones and wounded by terrorists from the colonist outpost ‘Mitzpe Yair’, in collaboration with the Yehuda (southern West Bank) Brigade commander and his subordinates; Colonists began consrtruction of a new road on the lands of En Al Beda – Palestinian demonstrators protesting the land-grab were assaulted with blows and teargas; The occupation forces have begun mapping, identifying and photographing the Masafer Yatta Palestinain communities, and do it late at night on Friday and Saterday; Terrorists from the colonist outposts of the South Hebron Hills attacked Palestinian shepherds and farmers all through the week with blows, stones and metal rods; The Israeli army violently dispersed Palestinians who tried to protest the construction of a Yeshiva on the lands of Farisiya, in the northern Palestinian Jordan Valley; At the orders of a criminal colonist, occupation soldiers harass a Palestinian shepherd from Hamra (northern Palestinian Jordan Valley), and arrested him twice this week – groundlessly; A terrorist from the ‘dismantled’ outpost ‘Ma’ale Ahuviya’ beat up two activists in Deir Jarayer; Violent arrests of Palestinian families in the Old City of Jerusalem; Army and police forces raided East Jerusalem neighborhoods all week to remove Palestine flags, hurling teargas canisters into homes, causing clashes and arresting residents; Israel’s Supreme Court rejected the Greek Patriarchy’s appeal to cancel the fraudulent sale of its propertys near Jerusalem’s Jaffa Gate to ‘Ateret Kohanim’ colonists; Right-wing thugs attacked the patriarchy’s guard on Mount Zion, vandalized a garden and a building, and desecrated graves;

South Hebron Hills
This week too, the occupation forces continued preparations for the transfer of the Palestinian communities from Masafer Yatta, under the aegis of the Supreme Court ruling:
On Tuesday, June 7, villagers of Taban were issued 13 final demolition orders that include most of the village structures, in addition to 3 water cisterns, 4 tents and a central solar system. At the same time, the inspector threatened to confiscate the vehicle of activists who came to visit the area, declaring it a closed ‘firing zone’.
On Friday, June 10, activists came to march in protest of the transfer and tried to remove the barrier blocking the way to Bir Al Eid. Colonists stoned the bus that drove the demonstrators there, while the army violently chased away the demonstrators, fired teargas and stun grenades at them, detained two activists on the ground, and as they were released forced them to leave in their car via the road below the violent outpost ‘Mitzpe Yair’. The outpost’s terrorists blocked their way out and hurled stones at their car at close range, so that one of the windows was smashed and an activist was wounded. Army and police forces – the local brigade commander among them – were present, and did nothing to prevent the murderous attack or arrest the terrorists. Soldiers cursed women-activists.
On Friday evening, army forces arrived in Taban, Majaz and Fakhit (villages in Masafer Yatta) and were busy mapping, identifying and photographing inhabitants’ IDs nearly until midnight. The next day, Saturday, they continued their activities in the villages of Khalat A-Daba, Safai and Jinba.
Work on a new colonist road on Palestinian land in En Al Beda began on Monday, June 6, n, and continued on Wednesday. On Friday, Palestinian inhabitants demonstrated at En Al Beda in protest of the colonist takeover of their lands. They were attacked by Jewish terrorists, beat up and pepper-sprayed. A disabled demonstrator was pushed to the ground and wounded. The army joined the colonists and chased the Palestinians away violently, firing teargas.
On Sunday, June 5, activists had to intervene once again in order to get school children and their teachers to the Susya school, after soldiers had detained them at the new checkpoints near Susya and Carmil.
On Friday, soldiers took over the Sumud Park in Tawane village, claimed they have orders to close it down, and threatened the villagers with weapons and arrests.
All week long, the army and police collaborated with the Jewish terrorists from colonist outposts and colonies in the South Hebron Hills, as these escalated and exacerbated their vandalizing of Palestinian fields and attacks against their owners:
Colonists invaded a tended Palestinian field in Tawamin on Sunday (a complaint was lodged with the police) and on Tuesday evening, when army forces were summoned there, and did nothing. The same evening, Tuesday, colonists with their flock invaded tended Palestinian fields officially closed off to Israelis in Umm Al Arais, and policemen summoned by the landowner stood by and demonstratively refused to remove the invaders. On Monday, June 6, colonists and their flocks invaded a tended Palestinian field and olive tree grove in Atariya and damaged them. An activist accompanying the landowner to the police station in Kiryat Arba colony to lodge a complaint was threatened by the investigator and even arrested for a short while.
On Tuesday, June 7, outpost terrorists attacked a Palestinian shepherd opposite Maon colony and stole a lamb, taking it to their outpost. The police refused to handle the case, and soldiers who arrived did nothing. On Thursday, the terrorists once again attacked a shepherd opposite Maon, this time with a dog. The police and army who arrived did nothing. That day, Thursday, June 9, a memorial put up by the Palestinian residents of the area, commemorating Haj Sliman Hadhalin who was run over by a police vehicle last winter in Umm Al Kheir, was smashed.
On Saturday, June 22, Jewish terrorists attacked a Palestinian on his way to his tree grove near Simra, beating him up with a metal rod and a stone. He was wounded in the head and needed medical care.
Activists accompanied Palestinian shepherds and farmers throughout the South Hebron Hills all week.

Palestinian Jordan Valley and the West bank Hill Range
On Sunday, June 5, Jordan Valley activists joined the harvest at Hadidiya and Samara. Later in the week they accompanied shepherds of the Palestinian communities in the northern part of the Valley. The occupation army is committed to to aid the violent colonist harassing his neighbors, the Hamra shepherds: on Sunday, soldiers arrested a shepherd from the community and released him two hours later at the checkpoint without any explanation. On Tuesday, the colonist harassed the shepherd and his flock with a drone, and on Wednesday the soldiers again detained the shepherd, exerting violence on activists who accompanied him.
Palestinians and activists who tried to demonstrate on Monday, June 6, against the construction of a ‘Yeshiva’ on ‘Giv’at Sal’it’, near Farisiya, were blocked by the army. The soldiers violently dispersed the Palestinians who managed to arrive there, using stun grenades and teargas. A woman soldier sprayed teargas at an elderly demonstrator’s face. Four people were wounded, among them the head of the ‘fence committee’ and journalists. The Yeshiva is built near Farisiya in order to take over the land and chase away the Palestinian community living there (in the nearby colony of ‘Shadmot Mekhola’ stands the skeleton of an unfinished structure for a yeshiva). A week ago at night, colonists have already put up a shed that overlooks the entire area. In addition, activists documented a new water pump in En Sukut which robs the spring water from local shepherds grazing on privately-owned Palestinian property; one of the three pools there has already dried out.
In Deir Jarayer, on the West Bank Hill Range, two activists were attacked on Wednesday, June 8, while weeding an olive grove by hand (for fear of the outpost colonists in the area, no Palestinian tractor driver is willing to go there). The two were beat up by a colonist from ‘Ma’ale Ahuviya’, the ‘dismantled’ outpost nearby. On Friday, Palestinian shepherds’ flocks from Rashash (West Bank Hill Range) were harassed by a drone flown by colonists.
In the Auja area (southern Palestinian Jordan Valley), shepherds were accompanied by activists unhampered most days this week, except for a few clashes. On Sunday, the colonists of the new outpost near ‘Mevo’ot Yericho’ drove away Palestinian shepherds, and the next day, Monday, shepherds from nearby Muraja’at were harassed. On Friday, Israeli soldiers joined the efforts to chase away Palestinian shepherds using false and contradictory claims.

Jerusalem
On Sunday, June 5 (Jewish holiday of Pentacost), 539 Jews came up to the El Aqsa Mosque compound with a heavy escort. The forces locked the Muslim men inside the mosque, allowing only women in the area in front of it. Teargas was fired into the Mosque, from which stones were thrown. The occupation forces arrested 5 Palestinians, two of them elderly women. At the Hota Gate in the Old City, soldiers attacked and arrested an elderly man, woman and their son, and beat up and arrested a young Palestinian couple.
The same day, in the early morning hours, the occupation forces invaded the Shu’afat refugee camp. Heavy clashes were reported, during which a Palestinian, wounded by gunfire, was arrested. The forces also invaded the Sur Bahr neighborhood and removed Palestine flags. The same day, colonists threw stones at Palestinian vehicles driving along the road dividing the East and West parts of the city.
On Monday, June 6, surveying began in preparation for demolishing a 12-apartment house in Silwan – 32 adults and 42 children are to become homeless. Inhabitants trying to protest were attacked by the occupation forces who fired teargas into houses, and a 4-year-old boy needed medical care due to suffocation. The occupation forces violently arrested a father and son in the Old City – the son was hospitalized. The same day, Jerusalem policemen were documented violently attacking one of the heads of the Islamic Movement and Ra’am political party, Sheikh Mohammad Hasan Salame and his family members at the Hota gate of the Old City. Additional forces raided Shu’afat and Issawiya again to remove Palestine flags. The same day, Jewish thugs attacked the guard of the Greek Patriarchy on Mount Zion, invaded the garden and structure, vandalized them and desecrated graves.
On Tuesday, occupation forces clashed with Palestinians in the Qalandiya refugee camp, leaving behind victims of suffocation by teargas, after having detained for hours at the checkpoint a 6-months baby being driven for critical surgery at Moqassad Hospital. In A-Ram, the forces raided a mourners’ tent during a chase after a Palestinian and threatened mourners; they again raided Issawiya neighborhood and violently detained two minors. Inhabitants of Silwan documented the abuse and arrest of a Palestinian boy, who was stripped of all his clothes. He was released after several hours and hospitalized with head wounds and fractures – and summoned for questioning.
The same day, Tuesday, in Issawiya, two policemen entering the neighborhood by mistake were attacked, the weapon of one of them was grabbed and they were pepper-sprayed. The next dawn, heavy forces raided the neighborhood, blocked all exits, fired at a car, raided homes and conducted arrests while making heavy use of teargas. One Palestinian was reported wounded.
On Wednesday, the Israeli Supreme Court rejected the Greek Patriarchy’s appeal to stop the takeover of their property near the Jaffa Gate by ‘Ateret Kohanim’ colonists – thus legitimizing the fraud by which these structures were purchased.
During the week, another 12-year-old minor was arrested in East Jerusalem, and the boy Abdul Karim Samarin from Silwan was arrested again. He is a 15-year old who was arrested and beaten up after his family had been attacked by colonists last week (His father is still hospitalized).
The army and police serial raids of Palestinian neighborhoods in Jerusalem in order to remove Palestine flags went on all week, as well as the ascent of Jews to the mosques of Temple Mount, where they shout racist curses and threaten to blow up the mosques.

This entry was posted on Sunday, June 12th, 2022 at 19:06 and is filed under Activities, Activity Spotlight, English. You can follow any responses to this entry through the RSS 2.0 feed. Both comments and pings are currently closed.