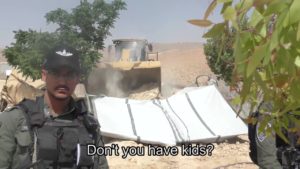 South Hebron Hills
The devastating implications of the Israeli Supreme Court ruling for the Palestinian communities in the area declared as ‘Firing zone 918’ in Masafer Yatta were made clear this week during a tour of the area, given by DCO officers and the army’s attorney to the lawyer representing the Palestinain inhabitants and local spokesmen. The new confiscation order – also covering the track-road between Bir Al Eid and Jinba – will close off the entire eastern part of ‘firing zone 918’ to Palestinians, and prevent them from entering the village of Jinba. Alongside a military patrol track, a dirt dyke will be raised to the height of 3 meters, preventing the inhabitants from crossing with their vehicles the huge area declared as a firing zone. Already at present, the occupation army operates a manned checkpoint preventing inhabitants of the area from entering Jinba. On Monday, May 30, the army began helicopter practice in the zone, exercising landings and takeoffs between Dakaika and Majaz. That day, soldiers attempted to stop construction work in Dakaika, and 3 immediate demolition orders were issued to inhabitants of Umm Kusa. On Wednesday, June 1, army forces accompanied by heavy equipment raided Fakhit and Mirkaz, where they demolished and confiscated 9 tents, donated to the villagers and used for dwelling as well as shelters for their sheep, following the wave of demolitions in these communities two weeks earlier. 20 family members, 6 children among them, remained homeless. The occupation forces have also started preventing entrance of activists and vehicles into the firing zone: they detained a local teacher at a roadblock and threatened to confiscate vehicles. On Saturday, June 4, villagers and activists held a march from Rakiz to Mufaqara, protesting the Masafer Yatta transfer. The occupation forces dispersed this march violently, using stun grenades, and detained an Israeli activist.
On Sunday, May 29, the Israeli army placed checkpoints at the entrance to Susya and Carmil and prevented teachers from getting to their school. Only after a local activist had intervened, the army enabled the teachers and school children transports to proceed.
On Sunday, colonists invaded a tended Palestinian-owned field in Wadi Tawamin. Police was summoned to the site and a complaint was lodged. On Tuesday, colonists from ‘Havat Maon’ and their flocks invaded Palestinian-owned fields in En Al Beda; The occupation forces refused to intervene. On Thursday, a colonist and his flock from ‘Mitzpe Yair’ invaded the fields of Mirkaz – inside ‘firing zone 918’. On Friday, June 3, a colonist and his flock invaded an olive tree grove and a tended field in Atariya and damaged both trees and grain. The same day, Friday, a colonist and his flock invaded a tended Palestinian field officially closed to Israelis in Umm Al Arais, in full view of soldiers present. A colonist and his flock once again invaded the field in Atariya on Saturday. Activists summoned police, who refused to arrive.
The army escort for Touba children back from their school in Tawane was over an hour late on Monday, and the soldiers instructed the children to proceed alone, unescorted, over more half of the way. On Tuesday, too, the noon escort was over an hour late, and in the morning, soldiers prevented activists from escorting the children, without authorization.
Activists accompanied Palestinian shepherds in the South Hebron Hills all days this week.

Palestinian Jordan Valley and the West Bank Hill Range
A massive wave of confiscations took place in the northern part of the Valley: on June 1, just before the height of summer, the occupation forces confiscated 2 water tankers, 8 tractors, 9 vehicles and 3 front loaders in Aqaba. On Friday, June 3, activists documented large earth works in preparation for construction of a high-school yeshiva and additional structures for the area’s colonists.
Activists accompanied Palestinian shepherds in Hamra and in Khalat Makhoul in the northern Palestinian Jordan Valley all days this week, and helped harvesting in Samara on Sunday and Tuesday without any special incident, except for a colonist flying a drone over flocks in Hamra on Saturday.
Palestinian shepherds from Arab Al Ka’abna in the West Bank Hill Range reported daily harassment by colonists in the Tayibe Junction area; the colonists also made a ‘night visit’ to their encampment.
In the Auja area, southern Palestinian Jordan Valley, on Monday May 30, the Israeli army chased away Palestinian shepherds and their flocks from their grazing grounds, and a soldier grabbed a phone from one of the shepherdesses who was trying to document the incident. The next day, May 31, works in preparation of laying a water pipe to the violent colonist outpost near ‘Mevo’ot Yericho’ were documented; activists reported the illegal works to the occupation authorities. During the rest of the week, shepherd accompaniment in this area proceeded unhampered.

Jerusalem
Sunday morning, May 29, 2600 Jews went up to the Al Aqsa Mosque compound, while Muslims were driven out (except for young devotees who locked themselves inside the mosque) and the occupation forces prevented Palestinian journalists from entering the grounds. The colonists carried flags, prayed and provoked the Muslims, and clashes broke out. A gang of colonists passed through the Old City prior to the ‘Flags march’, pepper-sprayed Palestinians, attacked a storekeeper, vandalized property and confronted residents with racist curses and shaming the Prophet Mohammad. Residents of the Muslim Quarter were required to lock themselves indoors. At the Damascus Gate and Salah A-Din Street, too, colonists ran riot unhindered, provoking Palestinians with curses, spitting, and hate songs, and assaulting a woman journalist. An elderly Palestinian woman who tried to protest was kicked and pepper-sprayed. The occupation forces backed up the vandals, violently arrested the harassed Palestinians and assaulted a team of Red Crescent volunteers who were trying to aid the wounded. Tens of thousands of flag-waving Jews went through the city singing songs of hatred towards Arabs. The flag thugs completed their day of riot with a night rampage through the Sheikh Jarrah neighborhood, where they hurled stones at homes, assaulted residents and activists with pepper-spray and beatings, smashed and burned cars. A correspondent of the Israeli Broadcasting Corporation was beaten up and robbed. Horse-riding policemen escorted the thugs and a water cannon was activated against the Palestinians, who were pushed back into their houses by the police. The Israeli forces also enabled thugs to attack Palestinian drivers on Road No. 1 and run wild in Silwan. In Issawiya, the Jewish terrorists threw stones at a bus and passengers were hurt. In response, Palestinians threw stones at two colonist buses that had no passengers aboard, and confronted the occupation forces. The Red Crescent reported over 60 Palestinians wounded. During the riots, the occupation forces arrested about 60 Palestinians – and 2 Jews (the ones who had attacked an Israeli Broadcasting correspondent in Sheikh Jarrah).
On Tuesday, May 31, colonists along with workers of the Nature Reserves and Parks Authority attacked homes and vehicles in Wadi Al Rababa, near the Old City of Jerusalem. The Jewish terrorists wounded 3 family members – a father, mother and their son – but the occupation forces summoned to the spot arrested only Palestinians, among them the son of the attacked family. The arrested son was released the next day, his arm broken and his entire body bruised.

This entry was posted on Sunday, June 5th, 2022 at 18:04 and is filed under Activities, Activity Spotlight, English. You can follow any responses to this entry through the RSS 2.0 feed. Both comments and pings are currently closed.