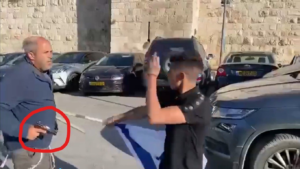 A military confiscation warrant for the road from Bir Al Eid to Jinba has been issued to the inhabitants of Masafer Yatta this week, accompanied by increased presence of heavy equipment at the nearby army base, works on a new military track, demolitions and demolition orders throughout the so-called ‘918 firing zone’; Jerusalem police made numerous ‘preventive’ arrests and issued restraining orders to activists in East Jerusalem in preparation for the colonists’ ‘flags march’ through the Muslim Quarter; Daily invasions of outpost terrorists and their flocks into Palestinian fields and vineyards in the West Bank Hill Range; Once again, an army force raided Tawane village at the dead of night, houses were searched for no cause and damage done to the mosque; During a violent arrest in Silwan, the occupation forces set an attack dog at the detainee lying on the ground; A violent arrest using attack dogs during a house demolition in Beit Safafa neighborhood, Jerusalem; A new outpost-satellite documented at the entrance to colonist outpost ‘Avigail’; Thousands of colonists marched into the Old City of Jerusalem on Saturday, waving Israeli flags, singing nationalist and hate songs, cursing and spitting at Palestinian inhabitants – the Israeli police dispersed Palestinians who attempted to protest, and arrested a Palestinian youth – none of the Jews was detained

South Hebron Hills
The occupation forces invaded Tawane village again this week at 2:30 in the night between Monday and Tuesday, searched homes and damaged the mosque.
On Monday, 5 final demolition orders were issued for structures in the Jawaiya area, and on Tuesday a military force demolished a tin shack put up behind an olive grove at the entrance to Tawane, as well as a tent in En Al Beda. The next day, Wednesday, soldiers arrested a shepherd and his son from Jawaiya near En AL Beda on false claims that the two broke into a vineyard planted there by colonists – this was ungrounded, and no breach of the fence or gate was found. The shepherd was released only at 2 a.m.
On Wednesday, large army forces with heavy equipment were documented opening a military track near Dkeike.
On Friday, May 27, inhabitants of Masafer Yatta were handed a military confiscation order for the road connecting Bir Al Eid and Jinba. A large concentration of heavy construction equipment was reported at the army base near ‘firing zone 918’. Army activity in the area attests to the immediate implications of the Supreme Court’s ruling that had recently legitimized the transfer of Palestinian communities from Masafer Yatta.
Also on Friday, a new satellite of the illegal colonist outpost ‘Avigail’ was documented close to the outpost entrance.
Activists accompanied Palestinian shepherds and farmers in the region all week. On Sunday, May 22, they chased away a colonist and his flock who invaded a tended Palestinian field in Atariya, and summoned police to the spot. On Friday, colonists with two flocks invaded tended Palestinian fields in Umm Al Araid; on Saturday colonists entered the same fields, but an army force distanced them. On Saturday, late afternoon, colonists from ‘Havat Maon’ invaded lands belonging to Humra.
Soldiers escorting Touba children on their way to and from school were late this week too. On Tuesday, the escort was two hours late. The delays were repeated on Wednesday and Thursday.

Palestinian Jordan Valley and West Bank Hill Range
Colonist outpost terrorists and their flocks invaded Palestinian fields and vineyards every day this week in Deir Jarayer and round the Tayibe Junction, on the West Bank Hill Range. On Monday, activists chased a colonist flock out of a Palestinian vineyard and helped mend fences. Early on Tuesday morning, activists on their way to help plowing at Turmus Aya distanced colonists and their flock from the grove. On Wednesday, the flock from the ‘dismantled’ outpost of ‘Ma’ale Ahuviya’ returned to graze in the olive groves of Deir Jarayer, and did so on Thursday as well – landowners and activists summoned the police.On Friday morning, colonists’ herds grazed in a sown Palestinian field close to Tayibe Junction. That day, activists helped mend fences in the area.
Shepherd accompaniment took place all days this week in Khalat Makhoul and Farisiya in the northern part of the Palestinian Jordan Valley. On Wednesday, a shepherd from Khalat Makhoul reported that an officer threatened him. The next day, a commander from the nearby base came round and warned the shepherd and activists not to get near the base. On Wednesday, May 25, activists helped plowing in the Simra community. On Friday, May 27, an attack was reported against a Palestinian shepherd from Hamra by the violent owner of the nearby colonist outpost, who rode his SUV into the Palestinian’s flock, grabbed his phone and hurled it to the ground while another colonist threw stones.
Around Auja, in the southern part of the Palestinian Jordan Valley, activists accompanied shepherds all week without any special incident, except on Tuesday – when women-soldiers came to limit grazing following a false complaint by a colonist.

Jerusalem
Following the ruling of the magistrate court legitimizing Jews’ ascent to pray at Temple Mount, about 100 Jews went up there on Monday, May 23, and prayed in the area in front of the mosque. Some of them waved Israeli flags.
On Tuesday, May 24, occupation forces raided the Issawiya neighborhood again, and handed out reports and fines to shops and businesses. Activist Mohammad Abu Humus came out to document the raid and was attacked by policemen, who also grabbed a Palestine flag out of his car. He was hospitalized and arrested when he got home. At the session on remand the police demanded and received a restraining oder distancing him for 15 days from the Damascus Gate area and Salah A-Din Street (even though he was charged on arrest in Issawiya) as part of a wave of ‘preventive’ arrests and restraininf orders to Palestinian activists from the area, in preparation for the colonists’ ‘flags march’ the following Sunday. Colonists were already documented on the same day, Tuesday, marching with Israeli flags through the Damascus Gate, secured by the occupation forces. Arie King, Deputy Mayor of Jerusalem and a leader of the colonist settlement in East Jerusalem, waved an Israeli flag as well as his handgun, which he aimed at a Palestinian youth who tried to grab his flag and was beaten up by the colonists.
On Wednesday, May 25, the occupation forces demolished a 2-storey house in the Beit Safafa neighborhood, leaving a family of 13 homeless. Prior to the demolition, the forces broke into the house with attack dogs, and violently arrested the father of the family and his son.
The Jerusalem district court overturned the May 26 ruling of the magistrate court and established that the special Jewish prayer on Temple Mount (Shema) is still considered a felony.
On the night between Thursday and Friday, a violent arrest was documented of a Palestinian resident of Silwan by the occupation forces, who set an attack dog at him while he was already lying on the ground.
On Saturday, a day prior to ‘Jerusalem Day’, thousands of colonists and youth set out to march into the Old City of Jerusalem, waving Israeli flags and singing nationalist and hate songs, cursing and spitting at Palestinian residents. Police forces dispersed the Palestinians who tried to counter them, and arrested a 16-year-old Palestinian. The colonists pepper-sprayed Palestinians inside the Old City. No Jew was detained.

This entry was posted on Sunday, May 29th, 2022 at 19:39 and is filed under Activities, Activity Spotlight, English. You can follow any responses to this entry through the RSS 2.0 feed. Both comments and pings are currently closed.