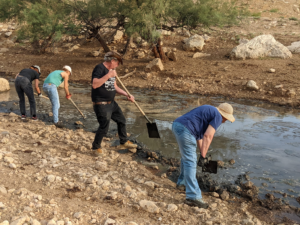 The Jerusalem police ran riot again at the funeral of Walid A-Sharif (who died of his wounds incurred at the Al Aqsa Mosque), firing live ammunition, rubber-coated bullets, teargas from a drone and a ‘skunk’ stream at people in the cemetery. 72 Palestinians were wounded and about 20 arrested; Palestinian and Israel demonstrators protesting the transfer of Palestinians in Masafer Yatta were blocked by the army in a full attack of teargas and stun grenades; Activists of the Palestinian Jordan Valley Coalition and ‘Looking the Occupation in the Eye’ movement repaired pools for watering Palestinian flocks in En Al Hilwa spring, which had been unlawfully fenced-in by colonists; A Jewish terrorist fired an air-gun and wounded a Palestinian youth in Sheikh Jarrah; Terrorists from the colonist outposts attacked an activist who tried to prevent them from destroying tended Palestinian fields in Deir Jarayer, on the West Bank Hill Range;

South Hebron Hills
This week, colonists and their flocks kept invading tended Palestinian fields, and damaged crops at Humra on the land of Tawane village on Sunday, in Simra on Monday, and Umm Al Arais on Tuesday. On Wednesday, May 18, a colonist riding his ATV broke into a fenced field in Tha’ala, vandalizing 20 young olive trees, and was about to beat up a Palestinian child at the site, but the latter managed to escape. Police was summoned and a complaint was lodged. On Thursday, armed Jewish terrorists in their SUV invaded the village of Khalat A-Daba in Masafer Yatta, one of them in army uniform.
On Friday, May 20, Palestinian and Jewish activists demonstrated in protest of the transfer of Masafer Yatta inhabitants under the aegis of a Supreme Court ruling and the declaration of the area as a ‘firing zone’. The demonstrators began to march from Tawane village towards Rakeez, but large army forces dispersed them by firing massive quantities of teargas and stun grenades.
The army escort of Touba village children on their way to school and back was late again this week, between half and hour and an hour and a half on Sunday, Monday, and Wednesday, leaving the children to wait for the soldiers while being exposed to very real danger from the terrorists of the colonist outpost ‘Havat Maon’.
On Saturday, activists accompanied Palestinian shepherds in Atariya and Simra-Fakhit, as well as the landowner in Umm Al Arais, unhampered.

Palestinian Jordan Valley and West Bank Hill Range
This week, every single day, colonists with their cattle and sheep herds from the illegal outposts around ‘Kochav Ha-Shachar’ colony, invaded privately owned and sown fields and vineyards belonging to Palestinians in Deir Jarayer and the Tayibe Junction. Activists came there day after day in an attempt to prevent the invasions, filmed the invaders and accompanied the landowners in lodging complaints at the Binyamin Police Station. On Tuesday, outpost terrorists – one of them on horseback – attacked an activist who tried to prevent their flocks from destroying tended Palestinian fields in Deir Jarayer. The next day, the colonists returned to graze their herds in the fields; activists summoned police who arrived two and a half hours later, and did nothing.
In the northern Palestinian Jordan Valley, activists accompanied Palestinian shepherds all week in Hamra, Samara, Farisiya, Khalat Makhoul, and En Sukut. West of Hamra, on Tuesday May 17, soldiers tried to restrict grazing and even detained activists on the ground with false claims, and in the eastern area the occupation army held a chase after flocks and their accompaniers, including an attempt to grab a cell phone and exerting verbal violence by a policeman against one of the shepherdesses. The army restricted Palestinian grazing in Hamra on Friday, May 20, as well.
Early Saturday morning, activists of the Palestinian Jordan Valley Coalition and ‘Looking the Occupation in the Eye’ movement came to En Al Hilwa in the northern Palestinian Jordan Valley and repaired Palestinian flock watering pools, after colonists of the area had fenced in the springs, preventing Palestinian shepherds and their flocks from accessing the water.
In Auja in the southern part of the Valley, activist accompaniment of Palestinian shepherds took place the whole week without any special events.

Jerusalem
The police ran riot again at the funeral of Walid A-Sharif, held on Monday, May 16. A-Sharif died of his wounds incurred in the Al Aqsa Mosque clashes about three weeks ago. The police fired rubber-coated bullets at the ambulance carrying the body and shot people praying inside the cemetery, using live ammunition, rubber-coated bullets and stun grenades, as well as teargas from a drone and a ‘skunk’ stream from a water cannon. The funeral participants tried to find shelter among the graves, where they were trapped and violently arrested. The army forces left 72 Palestinians wounded, among them journalists and paramedics who tried to aid the wounded, and arrested at least 20. According to police reports, 8 policemen were wounded. Likewise, at the A-Tour neighborhood, policemen fired at a vehicle that participated in the funeral procession.
That day, May 16, the Supreme Court rejected Mohammad Bakri’s appeal against the ban of his film Jenin, Jenin. Soldiers who had taken part in the attack and destruction at the Jenin refugee camp in 2002 joined the thugs of ‘Im Tirzu’ movement, verbally abusing and cursing the Arab MKs who were present. That day, the Supreme Court also rejected the appeal against putting up a cable car to the Western Wall over Mount Zion and the Silwan neighborhood, serving the colonist association ‘Elad’ that is planning a visitor center nearby.
On Tuesday, May 17, the occupation forces destroyed the new nursery opened by Mohammad Salhiya in Shu’afat, after the Jerusalem police destroyed the family’s home and nursery in Sheikh Jarrah in mid-winter.
On Friday, May 20, the Jerusalem police evacuated members of the Al Rajabi family from their temporary tent, where they had been living since the occupation forces demolished the 3-storey family home in Silwan, and demolished the tent.
Entrances to the Sheikh Jarrah neighborhood were blocked this week from Wednesday until Thursday night, in order to enable the colonists to celebrate the Lag Ba-Omer (Jewish religious) holiday at the Tomb of Simon the Just. A hate graffiti was sprayed on a Palestinian home in the neighborhood. On Saturday, May 21, a Jewish terrorist fired his air gun and wounded a Palestinian youth who was then hospitalized. The police were present, but did not arrest anyone.
That day, Saturday, the police broke into the Issawiya neighborhood and clashed with its residents, using massive quantities of teargas.

This entry was posted on Sunday, May 22nd, 2022 at 18:40 and is filed under Activities, Activity Spotlight, English. You can follow any responses to this entry through the RSS 2.0 feed. Both comments and pings are currently closed.