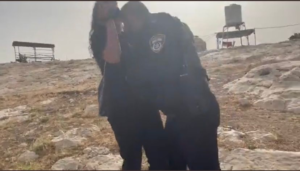 Israeli peace activists joined the Palestinian Jordan Valley Coalition on Saturday and cut 1.5 kilometers of a fence, erected by colonists illegally to prevent passage of Palsetinian shepherds and their flocks; Terrorists from an outpost in the South Hebron Hills invaded fields in Widada and their dog bit the Palestinian landowner in full view of the soldiers present – a policeman summoned to the site butted a woman activist in the head and arrested her; Palestinian teachers were once again detained on their way to school in Massafer Yatta, and their vehicle confiscated; 42 olive trees were cut down in a public park on the lands of Tawane; Earth-works for a new outpost on the lands of Farisiya, in the northern Palestinian Jordan Valley, were documented; Ongoing invasions of colonists from the outpost ‘Ma’ale Ahuviya’ (supposedly ‘dismantled’) with their flocks into Palestinian fields in the West Bank Hill Range; The Magistrate Court ordered a rehearing of the Salem family’s case, postponing their eviction from Sheikh Jarrah; A demolition order issued by the Jerusalem municipality for a 5-storey apartment building in A-Tour neighborhood was frozen by the court; A bus from Nazareth transporting Moslems to prayer at Al Aqsa was blocked and stoned in an ultraorthodox Jewish neighborhood in Jerusalem, the passengers, among them children and the elderly, were violently attacked while the police was late to arrive; The organization ‘Back to Temple Mount’ advertises a ‘Course for Undercover Temple Mount Activists’, teaching Jews how to infiltrate Al Aqsa through gates reserved for Muslims only;

South Hebron Hills
Activists accompanying shepherds near Zanouta this Tuesday documented a new outpost erected by colonists in the area. The same day, April 26, a new land appropriation order was issued in Majaz, in Massafer Yatta (firing zone 918) by the occupation authorities in order to pave an army patrol road that imprisons 250 dunams of Palestinian land between the Green Line and the future road.
In Tawane this week, the army escort for the schoolchildren on their way back to Touba was an hour late on Tuesday. On Wednesday, colonists with their flocks invaded fields that are officially out of bounds for Israelis, but left when activists arrived. On Thursday, Tawane villagers discovered that 42 olive trees were cut down in the public park planted on the land of one of the families in the village.

Teachers on their way to school in Jinba (Massafer Yatta) were delayed again this week, on Wednesday, April 27, before reaching the village. Their vehicle was confiscated and they were ordered to continue on foot.
On Friday, colonists from the outpost near ‘Meitarim’ with their flocks invaded Palestinian-tended fields in Widada (close to Zanouta) twice: in the morning an army force came and chased the colonists away, and in the evening the police were summoned but did not arrive. The next day, Saturday, (April 30), again the outpost colonists invaded Palestinian fields, this time with an attack dog who bit two of the landowners. One of them needed medical treatment. Soldiers were present but did not detain or distance the colonists. Instead, they stood aside while the colonists attacked activists who arrived at the scene. An officer of the Civil Administration was summoned, admitted that the fields were privately owned by Palestinians, but did not make the colonists leave, although they continued to graze their flock and destroyed the crop. Policeman Yaniv Nachshon attacked a woman activist by butting her head, and then accused her of attacking him and arrested her. Activists showed a video in which the policeman is clearly seen butting the activist, and she was released after questioning without having signed any conditions. The activists lodged a complained at the Hebron police against the colonists, who were identified, and the attacking policeman. The army issued a ‘closed military zone’ order for the entire area and chased away both activists and the landowners.
On Saturday, activists accompanied the Umm Al Arais landowner as well as Palestinian shepherds from Atariya and Simra-Fakhit, unhampered.

Palestinian Jordan Valley
Activists accompanied Palestinian shepherds and shepherdesses near Auja in the southern Valley every day this week. On Sunday the activists managed to prevent colonists from chasing away Palestinian flocks from their own grazing grounds, but on Friday masked colonists chased away the flocks, the activists summoned the police that arrived, but did not distance the colonists.
In the northern part of the Valley too, activists accompanied shepherds from Hamra all week. On Monday, soldiers doing the bidding of colonists from the nearby outposts limited the grazing, and on Thursday, April 28, an officer and a woman-soldier tried to chased away the Palestinian shepherds, threatening to arrest them, but the presence of activists prevented this. On Tuesday, activists documented earth works and foundations installed for a new outposts on lands belonging to Farisiya.
In Deir Jarayer on the West Bank Hill Range, flocks from the outpost (supposedly ‘dismantled’) ‘Ma’ale Ahuviya’ keep invading tended fields owned privately by Palestinians, and destroying their crops. Activists summoned police there on Monday, but the policemen would not concern themselves with this invasion. On Thursday, activists documented the invasion of a cattle flock belonging to a colonist from another illegal outpost into Palestinian lands at the Tayibe Junction.
On Saturday morning, Palestinian Jordan Valley activists and the organizations ‘Combatants for Peace’, ‘Looking the Occupation in the Eye’, and ‘Mothers Against Violence’ came to the area near the colony of ‘Maskiyot’ and cut about 1.5 kilometers of the fence which colonists from the nearby outposts erected illegally, in an area declared as a firing zone as well as inside the nature reserve of Umm Zuka. The fence blocks passage for shepherds and their flocks from the nearby Palestinian communities to about 70% of their grazing grounds. The activists finished cutting the fence and returned to their cars, where colonists from the outposts attacked them and prevented them from leaving. An armed security official grabbed the keys of one of the cars. Only after the police and army arrived, did the activists manage to get on their way.

Jerusalem – reported by Ir Amim
On Saturday, April 23, during the celebrations of Holy Saturday (on Easter week), videos and reports documented the police securing the Old City separating Christian Arabs from non-Arabs.
On Monday, April 25, the Magistrate Court held a session about evicting the Salem family from its home in the Umm Haroun part of Sheikh Jarrah. The family members came to the court, as well as the person claiming ownership of the house – Yonatan Yosef. About a 100 demonstrators protested the forced evacuation outside the court. The court ruled on Tuesday to return the issue to the execution authorities where it was handled previously, and to enable the Salem family to argue their case there.
That day, a city court froze the demolition orders for an A-Tour apartment building until further notice. This is a 5-storey building inhabited by 10 families. It was built in 2011 without a permit – and since then, every attempt of the families to have a permit granted has failed.
On Tuesday, April 26, Housing Minister Elkin announced that a lottery for apartments in ‘Giv’at Hamatos’ neighborhood would be the first on offer through the government project ‘apartment at a discount’. The lottery offers hundreds of apartments in Jerusalem, planned across the Green Line in the new neighborhood of ‘Giv’at Hamatos’, to be erected on lands belonging to Bit Safafa village. The hundreds of winners of this tender will be purchasing discounted apartments. All the apartments available through the project are offered in this very neighborhood.
One week after being attacked by policemen at Temple Mount/Haram A-Sharif, Allaa Sus lodged a complaint to the Police Internal Investigation Department, which opened an inquiry. Another complaint was lodged by photographer Rami Khateeb, who was also attacked there by policemen who broke his arm.
The right-wing organization ‘Nahalat Shim’on’ has applied for an additional session of the Supreme Court in its extended forum, regarding the eviction of Palestinian families from Karm Ja’uni neighborhood that was suspended in March.
The organization ‘Returning to Temple Mount’ advertises a ‘Course for Undercovers in Temple Mount’, which will instruct Jews how to steal into the Mount area through gates which are reserved by the police for Muslims only in order to retain the status quo there.
The police made many arrests in East Jerusalem: Over 20 youngsters were arrested and summons have been submitted to question others.
The East Jerusalem Electricity Co. (which functions separately from Israel’s Electrical Company, serving East Jerusalem and the West Bank, although it receives its electricity from the Israeli company) received a second notice for power cuts in its areas, beginning on May 8, and planned for 6 consecutive hours, 6 times a month in every region.
Israel and Jordan are planning to convene a committee on Jerusalem and Temple Mount at the end of the Ramadan month, where they’ll discuss the Jordanian request to enlarge the number of Waqf (Muslim authority) guards at Temple Mount/Haram A-Sharif.
On the eve of Leilat Al-Qader, the 27th night of the Ramadan month, associated with the Prophet Mohammad’s receiving of the Koran, about 200,000 Moslems came to pray at Temple Mount/Haram A-Sharif. Some participated in a non-violent demonstration there. Events passed mostly quietly during the night, and hundreds of thousands of Palestinians got to pray at their holy site.
On Thursday, April 28, the Israeli Holocaust Memorial Day, activists from the Temple movements posted signs on the Mount’s entrance gate closed to Jews (the site is closed to Jews during the crowded 10 last days of Ramadan, a regulation instated by Netanyahu in his days as Prime Minister). The signs showed a yellow Star of David with the inscription – “No entry for dogs and Jews’ (quoting Nazi laws).
That same day, it was reported that the police used a drone to throw teargas in the Temple Mount/Haram A-Sharif compound. This unprecedented act happened for the first time a week earlier.
On Friday, April 29, early in the morning, clashes between Palestinians and the police began at the compound. The clashes took place after the early morning prayer, during a demonstration inside the mosque protesting events that took place there during the week. The police dispersed the Palestinian protestors, and for a while closed the gates to the compound and did not enable entry to prayers. According to the Red Crescent, 42 people were wounded and 22 were hospitalized at Al Muqassad Hospital in East Jerusalem.
The same night, a bus carrying Muslims from Nazareth to pray in Jerusalem was assailed with stones while passing through an ultraorthodox Jewish neighborhood in the city. The passengers, among them many children and elderly people, reported they were violently attacked by the neighborhood residents, while waiting for the police, which arrived only after a long delay.

This entry was posted on Sunday, May 1st, 2022 at 17:32 and is filed under Activities, Activity Spotlight, English. You can follow any responses to this entry through the RSS 2.0 feed. Both comments and pings are currently closed.