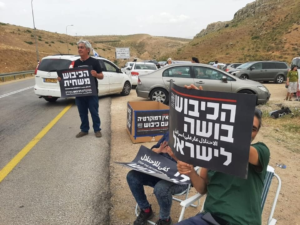 A colonist minor hit an activist in Simra with a club and wounded him in the head, the activist was hospitalized; Occupation soldiers fired in the air while chasing Palestinian workers trying to enter Israel in Massafer Yatta; The Israeli police caused again an accident in Umm Al Kheir while trying to confiscate a vehicle, which overturned, the driver was denied medical care and arrested; Palestinian teachers on their way to school in Massafer Yatta were detained for hours at a checkpoint and released only after the school day was over – their driver was arrested; A military force doing a colonist’s bidding chased away Hamra shepherds by shooting live fire; An Israeli army officer grabbed and violently threw away an activist’s cell phone in the southern Palestinian Jordan Valley; Activists kept a daily vigil in En Al Hilwa during the Passover week, protesting the fencing of the spring, its blocking to Palestinian shepherds and herds, and its being turned into another ‘dipping pool’ for colonists and occupation tourists; Two busloads of colonists, secured by large army and police forces, went traveling inside Area A; Terrorists from the colonist outpost above Zanouta invaded Palestinian fields with their flocks and attack dogs, when an activist summoned police he was detained and accused of a ‘false complaint’

South Hebron Hills
In the Massafer Yatta area (firing zone 918), occupation soldiers chased Palestinian workers on their way to work inside Israel on Sunday and Tuesday, firing in the air in the course of the chase. On Monday, soldiers began to dig barriers in this area, some of them on privately owned and tended Palestinian lands. That day, they detained a car with teachers on their way to school and confiscated it. Activists arriving at the site were also detained for a short while. On Wednesday, army forces again blocked the teachers on their way to school in Jinba and this time detained them for many hours. The teachers were released only after the school day was over, the vehicle and the driver’s phone were confiscated. On Saturday, soldiers arrested a mother and son from Markaz who were herding their flock close to home, located inside the ‘green line’ – with the excuse that they had entered Israeli territory. They were released only at night.
In Umm Al Kheir, on Monday, April 18, a police chase after a jalopy ended once more in an accident: the vehicle overturned but medical teams were not allowed to aid the driver, who was arrested. On Friday, a colonist with his car entered the village and threatened the villagers, but left after soldiers arrived (and put up a checkpoint at the entrance to the village).
A colonist in his car followed Touba schoolchildren on Monday on their way to school in Tawane, escorted by soldiers who forbade the children to photograph him. On Thursday, the soldiers were nearly an hour late for their morning escort, and a violent colonist arrived instead. On the way back, soldiers conditioned their escort on a group of activists and tourists leaving the area. Colonists have been reported building a new structure on land belonging to Harouba, near Tawane.
In Tha’ala this week, soldiers tried to limit grazing and chase away Palestinian shepherds upon orders from the colonist living in ‘Havat Mann’ outpost, but on Tuesday and Thursday activists accompanying the shepherds prevented this, aided by the intervention of the villagers’ attorney. On Saturday, the colonist came back to harass the shepherds and the activists. In Atariya, too, activists managed to prevent colonists from chasing away shepherds on Monday and Friday; on Wednesday a colonist with his flock invaded a tended Palestinian field and damaged it.
On Wednesday, April 20, colonists went out in two buses, secured by about 10 military and police vehicles, on a tour to a water pool near Karmil, inside Area A. The occupation forces threatened to arrest activists who arrived at the scene.
In Zanouta, colonists (one of them masked) invaded tended Palestinian fields on Thursday, April 21, with their flocks and attack dogs. Activists summoned police, but the policeman, who arrived after a long delay, detained one of the activists on grounds of a ‘false complaint’. The activist was taken to a police station where he was not even questioned, and got released unconditionally. On Saturday, too, a colonist tried to invade Zanouta fields with his car.
While accompaniment of the landowner at Umm Al Arais took place unhampered, a colonist with his flock harassed activists who stood on the nearby Simra hill, attacked one of them from the back and hit his head with a club. The activist was wounded and had to be hospitalized.
This week shepherds from Bani Naim reported colonists who chased them away from the grazing grounds near ‘Pnei Hever’ and threw stones at the flocks.

Palestinian Jordan Valley and the West Bank Hill Range
In Auja in the southern Palestinian Jordan Valley, colonists from the area’s outposts and their holiday guests harassed and chased away Palestinian shepherds and shepherdesses and their flocks from their own grazing grounds all week, but the daily accompaniment of activists helped continued grazing. Activists documented construction on a new outpost near the road between Auja and the Tayibe Junction.
In the northern Palestinian Jordan Valley, activists accompanied shepherds daily in Hamra and Khalat Makhoul. On Monday, April 18, an army force serving the violent colonist from the nearby outpost shot live fire at shepherds while chasing them away, and an officer grabbed a woman-activist’s phone and smashed it to the ground.
The next day, Tuesday, soldiers again arrived on the spot at the colonist’s bidding and tried to chase away the shepherds and their flocks, but activists present prevented this. In En Al Hilwa, activists placed explanatory stands during Passover week, protesting the thieving tourism in the area and the fencing-in of the local spring, which prevents Palestinian shepherds and their flocks from approaching and using the water, turning the spring into a colonists’ ‘dipping pool’. The activists suffered harassment, curses and violence by the colonists and their guests. A demolition order has been issued against the fence but had not been implemented.
Over the West Bank Hill Range, activists dealt with repeated invasions by colonists and their flocks into tended Palestinian lands near Deir Jarayer and the Tayibe junction. The activists documented these invasions on Monday and Wednesday, and reported them to the

Jerusalem – Ir Amim reporting
This week in Jerusalem was marked again by violence around Temple Mount/Haram A-Sharif. The police assaulted many Palestinians this week and plenty of documentation on the net shows police beating up Palestinians in the holy compound – including women, journalists and people uninvolved in any kind of activity.
On Sunday, April 17, the police began to limit Palestinians trying to enter the compound. Some were forced to leave their IDs with the policemen in order to enter. Large police forces entered the compound and enabled Jewish groups to visit the place.
On the same day, Israeli force entered the home of the Al-Julani family in the Bab Huta neighborhood of the Old City, attacked local youths and arrested several.
On Monday, April 18, too, the police persisted in entering in large forces into the Temple Mount/Haram A-Sharif compound and violently distancing Muslims in order to enable Jewish groups to visit. In clashes between police and the Palestinians, many of the Palestinians were wounded and/or arrested. In some cases, the policemen entered the mosques.
On Wednesday, April 20, hundreds of right-wing extremists marched in Jerusalem and confronted police around the Damascus Gate. Some managed to enter and march in the Muslim Quarter where they cursed and attacked Palestinians. Later, Jewish right-wing activists attacked Palestinians on the city’s light rail as well.
That evening, a joint iftar dinner was held in the Sheikh Jarrah neighborhood, peacefully attended by about 200 activists and inhabitants. However, after the meal was over, police arrived in great numbers, arrested a young Palestinian woman-activist, and attacked activist Mohammad Abu Humus, who was pepper-sprayed by colonists.
On Thursday, April 21, the police in large numbers entered and exerted violence in the Issawiya neighborhood.
On Friday, April 22, the police flew a drone which dropped smoke grenades in order to disperse Palestinians at the Temple Mount/Haram A-Sharif compound – for the first time ever. The police attacked a young Palestinian man – 21-year-old Walid Ashrif, inhabitant of the Old City – wounding him in the head. He was taken to hospital in critical condition.
On Saturday, April 23, as the ceremony of the Holy Fire was celebrated by the Orthodox Christian Church, the police limited in the extreme entry of people coming to pray at the Church of the Holy Sepulcher, in spite of the Supreme Court’s intervention. Cases were also documented of the police exerting violence against people praying there.

This entry was posted on Sunday, April 24th, 2022 at 17:01 and is filed under Activities, Activity Spotlight. You can follow any responses to this entry through the RSS 2.0 feed. Both comments and pings are currently closed.