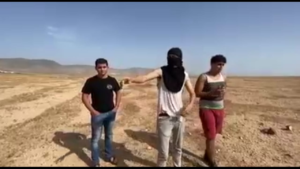 Colonists attacked Palestinian farmers and activists near Susya, in the presence of soldiers, during a plowing session coordinated with the Israeli army; The occupation forces put up roadblocks at the entrance to villages in the Massafer Yatta area and kept villagers blocked for many hours; ‘Im Tirzu’ thugs harassed a woman lawyer representing Palestinian Susya landowners during a hearing of their petition in the Supreme Court; Invasions by colonists and their flocks into tended Palestinian fields in Massafer Yatta villages, Tawane and Umm Al Arais; Soldiers detained activists at a checkpoint near Umm Al Kheir and searched their vehicle and bags for ‘weapons’; Masked colonists threw stones at Palestinian shepherdesses in Auja, and an army officer flew a drone over the flocks; An army officer, summoned to handle repeated invasions by illegal colonist outposts into Palestinians’ fields in the West Bank Hill Range, notified the activists that they were ‘disturbing the good order established with the settlers’; Soldiers arrested a Palestinian shepherd from Hamra, took him to an army base and released him after two hours without explanation;

South Hebron Hills
Plowing that had been coordinated with the army for Monday April 12 on Palestinian lands of Susya and Wadi Swayd was disrupted by colonists who attacked farmers and activists in the presence of soldiers. The next day, Palestinian and Israeli activists documented colonists from terrorist outposts training at a military firing range near Susya. A soldier tried to detain the activists for taking photos.
On Wednesday, April 14, the Supreme Court in Jerusalem heard the petition of Palestinian landowners from Susya against a ‘Susya’ colonist who’s been repetitively invading their land, and the non-enforcement of the law against colonists who use this land daily for construction, parking etc. The owners of the land were issued entry permits to get to the court hearing, but one of them, an activist from Susya, discovered he was prevented from entering. ‘Im Tirzu’ thugs threateningly harassed the Palestinians’ lawyer outside the courtroom for a long time, without intervention of the court’s security personnel.
Special army forces deployed throughout the South Hebron Hills on Monday evening. Next morning, Tuesday, they put up roadblocks at the entrance to Sha’ab A-Botom and Fakhit (firing zone 918) and prevented activists from videoing this. On Wednesday, the soldiers blocked entry to the village of Jinba and kept the residents of the ‘firing zone’ waiting for 5 hours – over an hour past the break of their Ramadan fast – preventing them from getting home. The soldiers confiscated car keys and IDs of passengers, and refused to give their own indentification. On Thursday, roadblocks were also placed at the entrance to Fakhit and Halawa, where a colonist from the terrorist outpost ‘Mitzpe Yair’ with his flock was hanging out with the soldiers inside the ‘firing zone’. The soldiers prevented villagers from entering or exiting their villages, and even blocked a vehicle on its way to hospital at Yatta.
Alongside harassment by the Israeli army, all week colonists continued to invade Palestinian-tended fields in Fakhit and Simra. On Sunday, colonists from ‘Mitzpe Yair’ with their flock invaded the village fields, and the next day flew a drone in order to chase away Palestinian flocks near Simra. On Thursday, terrorists from that outpost attacked Palestinian shepherds from these villages and chased away their flocks. Activists who arrived distanced them, but the army and police refused to arrive. On Saturday, the terrorists of ‘Mitzpe Yair’ – one of them masked – came back to chase away Palestinian shepherds and tried to mix up their flocks, but activists prevented this. A military force joined the colonists and tried to detain activists on the false grounds that the area was privately-owned colonist land. Civil Administration officials arrived, confirmed that the land does not belong to the colonists and that they are not even allowed to enter it, while the Palestinians may graze there.
In Atariya colonists chased away Palestinian shepherds on Monday, and on Wednesday a masked colonist attacked a flock, but the police that was summoned refused to arrive. The next day, the colonists once more tried to chase away the shepherds and flocks from the same site, and activists summoned the police. On Friday the colonists again returned to chase away the flocks and violently threatened the shepherd. In Tha’ala, soldiers doing the colonists’ bidding chased away a flock and its Palestinian shepherd from an area officially allowed him for grazing on Wednesday, while colonists and their flocks invaded Palestinian-tended fields and damaged them. On Saturday, too, the colonists tried to chase away shepherds from Tha’ala and flew a drone over a flock, but activists arriving there made them leave.
In Tawane, colonists invaded Palestinian-tended fields on Sunday, April 10. On Wednesday, at dawn, a military force raided the village and searched the homes for activists who were not there.
In Umm Al Arais, as well as in Kawawis, colonists from ‘Mitzpe Yair’ with their flocks invaded tended fields on Thursday and Friday, damaging them. Activists summoned the police.
Tuesday night, the Israeli army put up a roadblock at the entrance to Umm Al Kheir, and the next day, Saturday at noon, soldiers detained an activists’ vehicle and searched it, as well as the activists’ bags, claiming that weapons were suspected to be stored there.
Near the ‘Avigail’ colonist outpost, on Sunday this week, colonists were documented working on privately-owned Palestinian lands, and on Thursday they installed water pipes there.

Palestinian Jordan Valley and the West Bank Hill Range
All week, terrorists from the new colonist outpost near ‘Mevo’ot Yericho’ harassed Palestinian shepherds and shepherdesses of the villages Nueima and Diyuk in the Auja area, the southern part of the Valley. On Sunday, three masked colonists from the outpost attacked flocks and threw stones at Palestinian shepherdesses. Activists called the Jericho DCO. On Monday, a colonist blocked the shepherdesses on their way and a colonist vehicle followed them. An army officer who arrived there flew a drone above the flocks. On Wednesday, colonists prevented the Palestinian locals from grazing all over the area lying between their villages and the illegal outpost of a reserves army officer, ‘Havat Omer’, and on Thursday colonists in a security vehicle together with soldiers chased away Palestinian shepherds and their flocks, and flew a drone over them. The drone was flown again next morning to photograph the flocks.
All week, activists accompanied shepherds in the northern Valley, in Farisiya, Hamra, Khalat Makhoul, and En Al Hilwa. On Sunday April 10, in Hamra, the occupation forces arrested a Palestinian shepherd for no reason and took him to an army base, releasing him two hours later without explanation. Activists took him back to his village. On Tuesday, soldiers joined the violent colonist from the outpost near Hamra and chased away Palestinian shepherds and their flocks, and on Saturday the colonist sent his drone to chase away the flocks again.
Near Deir Jarayer in the West Bank Hill Range, flocks from the colonist outpost that had been supposedly dismantled, ‘Ma’ale Ahuviya’, invaded this week again privately owned and tended Palestinian fields. On Monday, activists summoned the police who did not arrive. A cattle flock from another outpost (belonging to Neriya Ben Fazi) grazed in a tended Palestinian field. On Wednesday, activists summoned the army to handle the colonist invasions in Deir Jarayer and Tayibe junction, but an officer arriving at the site declared that the activists were ‘harming the public order’ bt accompanying Palestinians to graze on their own private lands, thus creating ‘friction with the settlers’. The invasions continued on Thursday as well.

This entry was posted on Sunday, April 17th, 2022 at 19:42 and is filed under Activities, Activity Spotlight, English. You can follow any responses to this entry through the RSS 2.0 feed. Both comments and pings are currently closed.