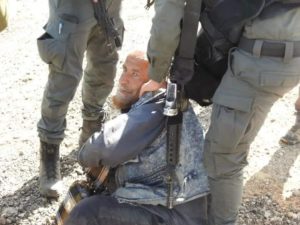 Colonists invaded Palestinian villages and towns, attacked innocent passersby and vandalized vehicles throughout the West bank, following a series of lethal terrorist attacks in Israel in which 11 persons were murdered; 3 new colonist outposts were erected on Palestinian lands; The army dismantled an outpost put up this week on lands belonging to Palestinian Susya; The colonist association ‘Ateret Kohanim’ entered part of the Petra Hotel in Jerusalem’s Old City, near Jaffa Gate; A tour of the ‘South Hebron Hills Regional Council’ (Jewish colonists) passed through Palestinian villages, concluding in an encampment on privately-owned Palestinian land; A shepherd from the terrorist outpost ‘Ma’ale Ahuviya’ threatened activists with a knife; An activist trying to distance colonists’ flocks from Palestinian fields in Deir Jarayer was detained on the false accusation of attacking a colonist and released uncharged, but the Binyamin Regional Council issued an affirmation of the fabricated attack; Colonists from ‘Mitzpe Yair’ stole sheep from a shepherd in Sha’ab A-Botom, police refused to search for the sheep or deal with the thieves; Palestinian students were arrested in the Hebrew University in Jerusalem by students from a study program held jointly by the University and the Israel police, after listening to music in Arabic; The Israel Supreme Court ruled to extend for 7 months the freezing of 38 demolition orders in Walaje, in order to enable the promotion of the village’s master plan; MK Itamar Ben Gvir visited Temple Mount under heavy police escort;

photo: A Tawane villager shoved by soldiers while protesting the confiscatiion of his tractor, Thursday, March 31, 2022, South Hebron Hills

South Hebron Hills
On Sunday, activists documented a new colonist outpost erected close to Palestinian Susya, on Alis lands, south of Flag Hill, as well as a farming invasion. The outpost was dismantled Tuesday night by soldiers and the Civil Administration. Activists also documented new caravans brought this week into the veteran terrorist outpost ‘Havat Maon’.
Colonists and their flocks invaded Palestinian-tended fields in Touba village on Wednesday, March 30, and then summoned soldiers to the village with false claims of having been attacked. In the presence of the soldiers, the Jewish terrorists ran wild among the village houses, threw stones and smashed car windshields. At the bidding of the colonists, the soldiers arrested one of the villagers, who was released the same evening under bail. A policeman summoned to the site refused to look into the damages done by the colonists and threatened activists with arrest. The army put up a roadblock close to the village and detained Palestinian and Israeli activists who tried to get out and lodge a complaint at the police station.
This week, too, Israeli police and soldiers harassed Tawane villagers. On Sunday they issued cessation of work orders against a building under construction and electricity poles in the village, and on Tuesday they raided the village, confiscating a family’s vehicle, threatening villagers and detaining an activist who protested their conduct. The activist was released and distanced from the village for 10 days. On Thursday, the army returned to Tawane and violently confiscated a tractor and wagon; An elderly Palestinian was smashed to the ground, suffered lesions and was evacuated to get medical treatment. In addition, colonists with their flocks tried to invade the village’s tended fields on Sunday, March 27, as well as Saturday, April 2, but villagers and activists managed to drive them away.
Terrorists from ‘Mitzpe Yair’ stole 7 sheep on Sunday from the flock of a villager in Sha’ab A-Botom. The next day, the flock’s owner identified the thieves and summoned the police, but the policemen refused to handle the thieves and instructed him to lodge a complaint at the station. The complaint was lodged, but the next day too, when policemen arrived after hours of delay, they refused to help the flock’s owner locate his sheep.
On Wednesday, a shepherd from Jinba was reported suffering severe burns in his face and hands, apparently from an army dud.
In Massafer Bani Naim, activists accompanied this week shepherds who had suffered attempts of expulsion by colonists and a security official from ‘Pnei Hever’. The shepherds reported that on Friday, April 1, about 20 colonists approached the village houses and tried to steal a flock of sheep and goats. The activists also accompanied shepherds in Zanouta this week, and kept flocks and colonists from the violent outpost near ‘Meitarim’ away from tended fields.
On Friday, the ‘South Hebron Hills (Colonist) Regional Council’ held tours escorted by soldiers around the outpost ‘Avigail’, passing through the Palestinian villages of Simra and Mufaqara, concluding at an encampment erected on privately-owned Palestinian land near ‘Avigail’. One of these tours was guided by the Civil Administration’s archeology inspector, who is also a reserves officer, and in this capacity had lately supervised demolitions in the nearby village of Sha’ab A-Botom.
On Saturday, activists accompanied shepherds in Manizal. At the bidding of the Taliya family from the nearby violent outpost, army and Civil Administration forces tried to forbid grazing illegally, and even detained activists on the ground with false charges, but policemen who arrived there were not impressed, and grazing continued as planned.

Palestinian Jordan Valley and the West Bank Hill Range
This week, too, activists tried in vain to make the police handle colonists’ invading with their flocks into Palestinian-tended fields around the Tayibe Junction and Deir Jarayer. The invasions were repeated daily. On Monday, masked terrorists from the outpost ‘Ma’ale Ahuviya’ grazed in the Palestinian fields of Deir Jarayer, and in Tayibe a Jewish terrorist holding a knife threatened activists who tried to chase off his flock from a tended Palestinian field. The police was summoned and confiscated his knife. On Wednesday, March 30, colonists driving a car chased activists who tried to distance their cattle from tended fields in Deir Jarayer, and then summoned the army on false claims that activists had attacked them. An activist was detained for ‘assault and battery’ and taken to the police station, but he was released without being charged. While the activists were held at the police station, the outpost terrorists returned to graze their cattle on Palestinian fields. The Binyamin Regional Council issued a false announcement claiming that “a Jewish youth was violently attacked by Arabs and a leftist activist near Kochav Ha-Shachar in Binyamin (…) the youth was wounded in his head and limbs and evacuated to Hadassah Hospital (…) his condition was described as not serious” – all relating to an event in which the police had cleared the activists of any suspicion and established that no attack or physical contact had taken place.
In the northern Palestinian Jordan Valley this week, shepherds were accompanied mostly unhampered. However, in Hamra, a military force chased away Palestinian flocks on Tuesday, March 29, without any legal ground, and tried to chase away flocks from Khalat Makhoul, but was prevented from doing so by activists present.
On Wednesday, March 30, colonists ran riot at the Hamra junction, throwing stones and attacking Palestinian cars. Five cars were damaged and a Palestinian was wounded and hospitalized.
Shepherd accompaniment in the southern part of the Palestinian Jordan Valley near Auja went unhampered this week.

Throughout the West Bank – Weekly Summary of Reports by Palestinian Sources
8 Palestinians killed and about 20 wounded either by live fire or rubber-coated ammunition by the Israeli army, in addition to many afflicted by teargas;
3 new colonist outposts erected on lands of the Palestinian villages of Qaryut, Qusra, and Al Ma’arajat;
22 reported attacks by colonists against Palestinians (stones, beatings, violent expulsion and shooting): in Ma’ale Adumim, Bir Al Eid, Jilazoun, Mevo’ot Yericho, Hamra Junction, Jerusalem, Hebron (twice), Yitzhar, Hawwara (twice), Qusra, Deir Jarayer, Silwan, Deir Sharaf, Marda, Dura, Kiryat Arba, Burqa, Bourin, Al Ramin, Fasail, the Bethlehem-Hebron road;
6 ‘price tag’ incidents (vandalizing cars, setting cars on fire, spraying hate graffiti): in Burqa, Jaloud, Turmus Aya, Touba, Asira Al Qabiliya, Sinjil;
In detail:
Large military forces raided Jenin and its refugee camp on Thursday, March 31, in order to conduct arrests. During the clashes that took place in the refugee camp, 3 Palestinians were killed – among them 23-year-old Yaziz Al Sa’adi and 17-year-old Sanad Abu Atiya. Contrary to the army’s report of having only shot at armed men, in the case of the 17-year-old he is documented as having thrown stones, but not holding a weapon. Additional documentation shows that the army prevented access from medical teams to the boy who was lying in his own blood, and later died of his wounds. During this raid, teargas canisters were fired at the city’s hospital. The gas spread through the Neonatal Intensive Care Unit and hospital teams were forced to evacuate it.
Hundreds participated in a protest march in Bil’in on Friday, April 1, a demonstration marking 17 years since the beginning of the protests against the Separation Wall. As marchers progressed towards the wall, soldiers fired teargas at them, threw stun grenades and used live fire. A youth was wounded in his leg and hand, and was taken away for medical care.
A further decline was noted in the condition of Palestinian prisoner Nasser Abu Hamed, terminally ill. His family has petitioned to have him released early because of his condition.
Bushra Al Tawil, a Palestinian journalist and ex-prisoner, was detained several days ago at the Zaatara Checkpoint and declared an administrative detainee – without any indictment, evidence, or date of release.
Halil ‘Awawda has been on hunger strike now for 24 days, protesting his administrative detention.
This week, families of prisoners from Gaza were finally allowed to visit them in Israeli jails, after two years of prevention.
Fatma Al Massri, a one-year-and 7-months old baby from Gaza, died on Monday, March 28. She suffered from a heart defect and was referred to medical treatment at one of the East Jerusalem hospitals, but the State of Israel refused to let her be moved there.

Inside the Green Line (Israel proper)
Following a series of terrorist attacks in which 11 persons were murdered in Israel during the last week in March, dozens of attacks against Arabs and vandalism of their property took place, also within the Green Line:
During a demonstration on Monday, March 28, following an attack in which two Border Policemen were shot to death in Hadera, the crowd attacked Arab restaurant workers in town. After an attack in which 5 people were murdered in Bnei Brak, the mob closed on the “Kan 11” channel news reporter and called to lynch him. On Wednesday, 5 residents of Safed were arrested on suspicion of setting fire to 6 vehicles in an Arab part of town. On Firday, a worker from Jisr A-Zarka was beaten by racists, and on Saturday the police arrested two residents of Netanya who attacked an Arab gas station employee.
On Sunday, March 27, the ’Yoav’ police unit uprooted olive tree saplings planted in Sa’awa on Saturday in a solidarity action with the Negev Bedouins.

This entry was posted on Sunday, April 3rd, 2022 at 19:34 and is filed under Activities, English. You can follow any responses to this entry through the RSS 2.0 feed. Both comments and pings are currently closed.