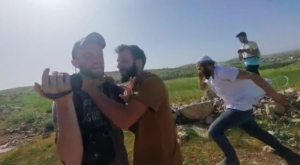 Colonists from the terrorist outpost ‘Havat Maon’ beat up Palestinian shepherds and activists in Tawane village, tried to strangle an activist and smashed a camera; A police car crashed into a ‘mashtuba’ (jalopy) car at Umm Al Kheir, injuring a woman passenger and her children; An officer flew a drone over flocks near Auja for ‘identification’ purposes; Invasions by colonists and their flocks and attacks against Palestinians in the South Hebron Hills, the Palestinian Jordan Valley and throughout the West Bank; Closure of 28 Palestinian associations and institutions in Jerusalem has been prolonged again; Dozens of arrests throughout the West Bank and East Jerusalem; Confrontations during Ramadan nights at the Damascus Gate, youths wounded and arrested, but this time the police refrained from violently dispersing the celebrants;

South Hebron Hills
On Monday, April 4, a gang of colonists from the terrorist outpost ‘Havat Maon’, armed with clubs and stones, attacked a Palestinian shepherd and the activists accompanying him to pasture in Harouba, near Tawane. The colonists beat up villagers and tried to strangle an Israeli activist, who needed medical assistance. They also smashed a camera, grabbed a cell phone, and hurled stones with a slingshot. When the police arrived, they blatantly lied that sheep had been stolen from their flock. Finally, the army issued a ‘closed military zone’ order for the area, inclusive to Palestinian shepherds. The next day, Tuesday, the army implemented the closure of the area for Palestinians and arrested a villager who was released only on Thursday night, under bail. The army prevented Palestinians from approaching the area on Wednesday as well. On Thursday, colonists wehnt swimming in a Palestinian water hole and invaded the village’s tended fields with their flocks, causing heavy damages. The continued invasions of colonist flocks have caused total destruction of all crops in Harouba’s fields. On Saturday, terrorists of the outpost came to the outskirts of Tawane and threw stones at a house.
On Wednesday, during a police raid on ‘mashtouba’ cars at Umm Al Kheir, a police car collided with a Palestinian vehicle, wounding and causing shock to its passengers – a woman and children. The injured driver was detained and the car confiscated. Last January, during a similar raid in Umm Al Kheir, a police car ran over 65-year-old Suleiman Hadalin, who died of his wounds.
Colonists and their flocks invaded tended Palestinian fields in Umm Al Arais on Tuesday, damaging the crop, and on Saturday invaded and sabotaged fields at nearby Simra. On Wednesday, they invaded fields in Atariya. Activists summoned the police, but policemen claimed not to find the site and arrived after the invading colonist left with his flock. On Saturday, colonists from the terrorist outpost ‘Mitz’pe Yair’ assembled to chase away a Palestinian shepherd from Atariya, but women activists accompanying the shepherd made them leave. The same day, colonists of this outpost also invaded tended fields between Simra and Fakhit with their flocks, harassing Palestinian shepherds from the village. Activists summoned the police. On the basis of a false claim made by colonists, two Palestinian shepherds were detained on the ground, but released after the claim proved to be false.

Palestinian Jordan Valley
All days this week, activists accompanied shepherds to their grazing grounds in Khalat Makhoul, Hamra, Farisiya and Samara in the northern Valley. On Monday, a colonist riding an ATV chased away a Palestinian shepherd and his flock near Farisiya (see video at https://fb.watch/cazam95NFq). In Samara, on Friday, soldiers tried to chase away Palestinian shepherds, but activists prevented them from doing so.
On the West Bank Hill Range, colonists and their flocks invaded Palestinian-tended fields in Deir Jarayer again this week. On Tuesday activists summoned police to make them leave and accompanied the landowner to lodge a complaint. That day, activists prevented soldiers from distancing Palestinian shepherds from their own grazing grounds near the colony ‘Ma’ale Michmash’. The next day, Wednesday, activists documented invasions by colonists and their flocks into the fields of Tayibe and documented a new outpost erected there.
Near Auja, too, in the southern part of the Palestinian Jordan Valley, activists documented the construction of a new colonist outpost this week, and accompanied shepherds every day of the week. On Monday, April 4, a military force prohibited the approach of Palestinian shepherdesses with their flocks to the local road without legal grounds, and also flew a drone above the flocks, an act that caused the flock to panick and disperse. An officer told the protesting activists that the drone was flown to photograph the flocks and their shepherdesses for identification purposes. On Thursday, a colonist on his ATV rode into Palestinian flocks opposite ‘Mevo’ot Yericho’, threatened the shepherds and pointed his weapon at them.

Jerusalem – Report by Ir Amim
This week’s events in Jerusalem were marked by the Ramadan month, particularly at the Damascus Gate. We note that compared to last year’s events, the police seem to have learnt their lessons and drawn conclusions, and are showing different conduct. There were confrontations between Palestinians and the police at night – in most cases policemen arrested suspects specifically and refrained from dispersing crowds or using crowd-dispersal means such as water cannons or stun and teargas grenades. The police spokesperson even stated that ‘most people there did not take an active part in the disturbances’. We do hope that police conduct, at least at and around the Damascus Gate, will not escalate and will enable thousands of Palestinians to continue to celebrate the Ramadan.
On Sunday, April 3, the authorities prolonged administrative detention of Majd Jab’a, resident of Jerusalem’s Old City, for 3 additional months, one day before he was supposed to be released. Shortly before the Ramadan, Nihad Zughayer – a known activist from the Old City – was arrested as well, and was notified that he was to be distanced from Haram A-Sharif (Temple Mount) for 6 months. The same evening, Foreign Minister Yair Lapid, accompanied by Police Chief Kobi Shabtai, visited the Damascus Gate. Later that evening, clashes broke out there, and ten Palestinians were arrested at the site, accused of throwing objects at policemen. During these confrontations, use was made of crowd-dispersal means.
On Tuesday, April 5, the authorities arrested the Chairman of the Committee for Palestinian Prisoners’ Families, Amjad Abu As’ab, whose arrest was later prolonged. After he was released, the authorities notified Adnan Rith, Jerusalem Governor on behalf of the PA, that Rith was hereby denied entry into the West Bank.
On Wednesday, April 6, former MK Yehuda Glick visited Temple Mount/Haram A-Sharif, escorted by security personnel. That day 28 institutions, associations and Palestinians organizations in Jerusalem were further shut down with the claim that they damage Israeli sovereignty. Among them is Orient House, Home of the Prisoner and others.
On Friday, April 8, between 55 and 80 thousand people arrived for Friday prayers at Al Haram A-Sharif/Temple Mount. On Thursday already, Qalandiya Checkpoint was closed to vehicular traffic and reopened only on Friday afternoon.
About half of the people arriving to pray came from the West Bank. The army allowed such people over the age of 50 and children under 12 to enter Israel on Fridays during the Ramadan month without a special permit.
On Saturday night, April 9, the police prevented Palestinians from entering the Haram A-Sharif/Temple Mount compound in order to hold their Itikaf prayer which lasts all night.

Throughout the West Bank – Compendium of Palestinian Reports
At least 22 attacks by colonists against Palestinians (stone-throwing, clubbing, attacks against flocks) were documented this week in the following cities, towns and villages of the West Bank: Turmus Aya, Sinjil, Kufr Malik, Bourin, Tul Karm, Hebron, Burqa, Qusra, Khirbata, Bani Kharith, Silouad, Bethlehem, Al Labad, A-Dik, and ‘Yitzhar’ Junction.
Dozens of Palestinians were wounded during the Friday protest demonstrations in Qaddoum, Beit Dajan, the Nitzanei Oz checkpoint, and Beita. In Beita, the army flattened the hill on which demonstrations have been held, uprooting numerous olive trees.
On Saturday, during a demonstration in A-Ram, soldiers shot a rubber-coated bullet at 17-year-old Mohammad Muttawar who lost his eye in result. Numerous confrontations between the Israeli army and Palestinians were documented throughout the West bank this week, among them in the village of Husan (Bethlehem district), where a military force conducted an arrest raid using teargas and stun grenades. Dozens of villagers suffered from suffocation.
On Sunday, April 3, large army forces spread out along the Separation Fence from north to south, chasing Palestinian workers trying to cross over to work in Israel, and chased them shooting rubber-coated bullets, teargas and stun grenades. Many Palestinians were wounded, especially suffocating from the gas.
The army raided Jenin and its surrounding area, both before and after the terrorist attack in Tel Aviv, where a refugee-camp resident fired at people sitting in a café, killed 3 Israelis and wounded 14, among them 3 in serious condition. In the army raids on Jenin on Saturday, an activist of the Islamic Jihad movement, Ahmad A-Sa’adi was killed, and 13 Palestinians wounded, among them a 19-year-old girl whose condition is serious.

About 110 Palestinians were arrested or detained this week in the West Bank.
2 ‘Price tag’ actions were carried out by colonists, in the villages of Jaloud and Bourin.
Colonists from ‘Migdalim’ continue to annex Qusra village land, and this week about 100 dunams of that land were fenced in, 50 of them containing olive tree groves.
Since the beginning of 2022, the occupation authorities have issued 400 administrative detention orders, 210 of them new ones.

This entry was posted on Sunday, April 10th, 2022 at 14:21 and is filed under Activities, English. You can follow any responses to this entry through the RSS 2.0 feed. Both comments and pings are currently closed.