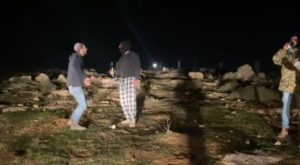 A police tow-truck ran over an elderly Palestinian in Umm Al Kheir, wounding him critically, the police present at the scene drove off leaving the wounded man unassisted; Gangs of settlers from ‘Avigail’ outpost had nightly celebrations on privately-owned Palestinian fields in Mufaqara, while the army dispersed the landowner and activists by throwing stun grenades; Agricultural invasions and intimidation of Palestinain shepherds in the South Hebron Hills, Palestinian Jordan Valley, and the West Bank Hill Range; ‘Homesh’ Jewish terrorists attacked Burqa village again, vandalizing houses and gravestones – the Israeli army responded by firing at Palestinians and wounding three of them; Protest vigils against the occupation took place on Saturday at various junctions throughout the country;

South Hebron Hills
The occupation forces went on a campaign of confiscating out-of-order vehicles parked near the mosque in Umm Al Kheir, on Wednesday, January 5 – a confiscation that is supposed to take place only if a such a car is caught driving. During this campaign, a police tow-truck driver – a Hebron settler – ran over an elderly Palestinian and wounded him critically. The driver continued driving while dragging the elderly wounded man underneath his truck, while villagers were trying to stop him, all this in full view of a police van driving alongside. In response, a soldier got out and fired in the air, the police vanished and deserted the wounded Palestinian, who was eventually evacuated by a private Palestinian vehicle. His condition is critical. The police spokesperson announced in response to the complaint about this criminal conduct, that the police will continue and ‘act determinedly to actualize governance’ in the area. Indeed, during the next two days, Thursday and Friday, large forces returned to confiscate vehicles in Zawaidin and in the Umm Al Kheir area close to ‘Carmel’ settler-colony, and drones hovered over the village for hours.
This week, gangs of settlers came to celebrate at night on privately-owned Palestinian lands of Mufaqara village (where they had carried out a pogrom last September). Wednesday night it was reported that settlers were planting olive trees in the privately-owned land of a villager. Activists coming there with the landowner found about 10 settlers armed with pistols, drinking and dancing. Army and police summoned to the place issued a closed military zone order. The next night, it was reported that about 20 settlers invaded the same field, began to put up a tent and lighted a campfire. Activists came, the army was summoned but enabled the settlers to countinue their party there another two hours, singing around the fire. On Friday morning, Palestinian and activists came to the field and planted trees there. The army enabled them to work, but at noon declared a closed military zone and chased away the Palestinians with stun grenades, enabling the settlers from ‘Avigail’ outpost to return and uproot the saplings.
That same day, Friday, settlers invaded Palestinian privately-owned land in Susya and threw stones at the owners. More settlers tried to invade Susya and one of them fired in the direction of the village. Villagers blocked the invaders. At this point, about 60 settlers gathered on the spot and began singing and dancing on the privately-owned fields that are closed off to Israelis by official order.
In Tha’ala, on Friday, settlers invaded tended Palestinian fields with their flock, and at the same time chased Palestinian shepherds away from the area.
Activists accompanied shepherds in Atariya on Saturday, and documented large army and police forces preventing Palestinian plowing of the village lands. Activists also accompanied the landowner to Umm Al Arais without special incidents, visited Umm Al Kheir and heard testimonies of the horrifying running-over of the elderly villager.

Palestinian Jordan Valley and West Bank Hill Range
Activists accompanied Palestinian shepherds all week in Samra, Hamra, Khalat Makhoul and Farisiya in the northern Palestinian Jordan Valley, round Auja in the southern part, as well as in the West Bank Hill Range around Tayibe Junction and Deir Jarayer.
In Samra the army detained shepherds and activists on Sunday, January 2, on false grounds, and near Hamra settlers blocked an activists’ vehicle that day, and chased away Palestinian shepherds and their flocks on Friday, January 7. In Khalat Makhoul too, settlers tried to chase away a shepherd on Monday, January 3, and on Saturday, January 8, settlers let loose a donkey, a horse and four dogs into a Palestinian flock, but activists present managed to keep the sheep from dispersing. In Auja activists managed to prevent settlers and soldiers doing their bidding from chasing away Palestinian flocks on Tuesday.
Around Tayibe Junction, on Monday, a new settler-colonist outpost was reported, and an army force tried to prevent Palestinian grazing on false grounds of a firing zone (in which the new outpost was set up without any reservations). On Tuesday activists documented an invasion of settlers and their flocks into tended Palestinian fields in the area and reported this to the authorities. Activists accompanying a shepherd from Arab Al Qa’abana nearby heard from him about the invasion of terrorists from the outpost into the village and an attack against a child during the former week. The invasions continued on Wednesday: A flock of sheep from ‘Ma’ale Ahuviya’ outpost invaded a Palestinian olive grove and vandalized it, and a settler’s cattle herd invaded the fields of Tayibe. Activists summoned police, which failed to arrive. The next day, Thursday, invasions by settlers’ flocks were documented in Deir Jarayer and Tayibe, activists again summoned the police and it failed to arrive, yet again.
On Monday, the occupation forces entered farmed fields at Ibzik (Touba district) with bulldozers, and destroyed about 500 dunms that had been plowed and sown with wheat. The next day, Tuesday, 12 structures in the village were demolished, of them 4 dwellings. For Gideon Levy’s item in Haaretz, see:
https://www.haaretz.co.il.premium.HIGHLIGHT-1.10520882./magazine/twilightzone

Jerusalem
The protest vigil against evicting Palestinian families from the Sheikh Jarrah neighborhood went unhampered by the police this week.

Demolitions in Jerusalem
On Tuesday, January 4, the occupation forces demolished a clinic in the Jabal Mukabar neighborhood, and a dwelling in Beit Hanina. On Wednesday, they demolished a house in Silwan.
92 Palestinians, of them 41 minors, lost their homes in Jerusalem to demolitions during December 2021. At the same time, the Jerusalem Municipality approved the construction of thousands of dwellings for Jews across the ‘green line’.

Throughout the West Bank
Jewish terrorists from ‘Homesh’ outpost broke into Burqa village on Monday, January 3, and damaged villagers’ houses as well as the local graveyard. The occupation forces arrived, fired rubber-coated ammunition and teargas, and wounded 3 Palestinian villagers.
On Saturday, January 8, a villager of Mughayar (Ramallah district) discovered that trees he had planted a day earlier had been cut down and vandalized, and the entrance gate to the olive grove smashed.

**
At Nahalal Junction, as well as other junctions around the country, protest vigils against the Israeli occupation were held on Saturday, January 8.

This entry was posted on Sunday, January 9th, 2022 at 19:56 and is filed under Activities, English. You can follow any responses to this entry through the RSS 2.0 feed. Both comments and pings are currently closed.