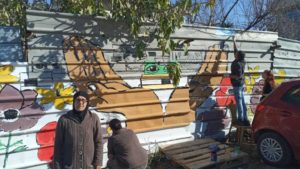 Palestinian shepherds, held for 4 days in custody after being beaten and wounded by gangs of settlers (assisted by Israeli soldiers), were released without bail or restraints; intimidation raids by settlers in the South Hebron Hills communities continue; eviction date of the Salem family from Sheikh Jarrah remains undecided, police brutality against activists in protest there continues; Israeli army prevents Palestinian plowing in South Hebron Hills and the Palestinian Jordan Valley; Occupation forces secured yet another settlers’ march to ‘Homesh’ by blocking the village of Burqa, on whose lands the outpost was built; UN summary of 2021 in Israel and the Occupied Territories: 235 Palestinian structures were demolished in Jerusalem alone, 3000 Palestinians arrested, 450 documented attacks by settlers against Palestinians, 325 Palestinians and 17 Israelis killed, 17,000 Palestinians and 900 Israelis wounded;

photo: Fatma Salem and activists drawing on the fence around the Salem family home scheduled to be evacuated, Monday, December 27, 2021

South Hebron Hills
The intimidation raids of the region’s settlers inside Palestinian villages continued this week as well. On Monday morning, December 27, settlers invaded Touba, held ‘searches’ in homes and took advantage of most men being out working to terrorize the families. At noon they came again, riding motorcycles and ATVs, and this time opened the sheep pen gate and chased the flock away. In the afternoon, two settlers returned on motorcycles, rode wildly into the village, entered a cave and chased away its dwellers, climbed a water tank and opened its lid in order to ‘search’ it. The two also invaded the villages of Mughayer Al Abid and Safai, entered caves and sheep pens and frightened the dwellers. On Wednesday, at 3 a.m., the occupation forces doing the settlers’ bidding showed up at the home of a widow in Touba and arrested two of her sons, one of them suffering from mental disability – on the false charge of stealing sheep from the ‘Havat Maon’ outpost. The two were released the next evening.
Tawane inhabitants discovered on Monday that ten trees were vandalized (once again) in a public garden on their privately-owned land.
In Qilqis, south of Hebron, on Tuesday, December 28, forces equipped with heavy machinery demolished a 2-story stone house belonging to a 10-member family, built on its privately-owned land. The forces hurled stun and teargas grenades at them, and destroyed an cultivated terrace in order to make their way to the house.
The occupation forces have been consistently sabotaging Palestinian ploughing work, that takes place at this time of year. On Thursday evening, at the order of settlers, they came to Rajim, near the outpost ‘Asael’, to confiscate a ploughing tractor belonging to the Palestinian landowner; however, they had to give up because the tractor had a punctured tire. The next day, Friday, soldiers prevented the Umm Al Arais landowner from approaching and ploughing his fields near ‘Mitzpe Yair’ outpost.
On Saturday, January 1, 2022, settlers and their flock invaded privately-owned Palestinian fields and a water hole at Humra, near Tawane. Soldiers present did not intervene, but activists arrived and made the settlers leave. The same day, activists joined ploughing work in fields in Bani Naim, near the settler-colony ‘Pnei Hever’.

Palestinian Jordan Valley and West Bank Hill Range
This week saw in full the incident that took place in En Al Hilwa, mentioned in our previous report, when we found out about the wounding of 4 Palestinian shepherds and the arrest of another four. In the meantime, details have come out: a young shepherd and two children were attacked by a gang of Jewish terrorists and beaten up. Israeli soldiers joined the settlers, shackled and arrested the attacked shepherd. When his family members arrived on the ground, dozens of Jewish terrorists from the nearby outposts awaited them as well as soldiers, who enabled the settlers to tie up the shepherds and beat them right there. All the attacked shepherds, among them those who needed hospital care, were arrested and taken to an Israeli army base, where the settlers carried out a police lineup with more beatings for good measure. The shepherds’ phones were taken from them, and recordings of the attack were deleted. 4 wounded shepherds were released then and there, and the other 4 were kept in the army base for 4 days, and were then released without bail or conditions. For Amira Hass’ writeup in Haaretz: https://www.haaretz.co.il/news/politics/.premium-1.10507617
***
In Ibzik, the occupation forces demolished 16 structures, among them 6 dwellings, and issued eviction orders for inhabitants whose homes had not been demolished, for military maneuvers.
Activists accompanied shepherds and plowing this week in Hamra, Khalat Makhoul, Farisiya and Samra in the northern part of the Palestinian Jordan Valley, mostly unhampered. On Wednesday, in Khalat Makhoul, activists prevented the army from chasing away a shepherd and his flock on false grounds of ‘closed military zone’. Around Auja in the southern part of the Palestinian Jordan Valley, on Wednesday, December 29, settlers from the new terrorist outposts, accompanied by soldiers tried to prevent Palestinian grazing on various false grounds, but activists present prevented this. The same place, on Friday, army forces managed to chase away a Palestinian flock that had crossed the road to the side where the (illegal) outposts stand.
Activists accompanied plowing in Tayibe Junction and Deir Jarayer on the West Bank Hill Range on Wednesday, unhampered.

Jerusalem
Activists held a Solidarity Day with Sheikh Jarrah inhabitants this week, painting on the fence put up to block the house of the Salem family who’s been living there for 70 years and is now facing immediate eviction. On Thursday, activists came to protest the eviction at the execution office, where the session ended inconclusive. The sons of the home owner, as well as a journalist and a Member of Knesset, were not allowed in. On Friday, hundreds of demonstrators took part in the weekly protest vigil in the neighborhood. When they were about to disperse, a police force brutalized its way into the crowd. Policemen pushed demonstrators, grabbed Palestine flags, and arrested a Palestinian youth who was released that same evening, sentenced to 5 days of house arrest and 15 days restraining from the neighborhood, all for holding a Palestine flag (all the court’s previous rulings stated there is no legal prevention of holding a Palestine flag).

Demolitions in Jerusalem
The occupation forces demolished a structure in Umm Touba on Sunday, 9 structures in Hizma and a dwelling in Issawiya on Monday, a dwelling in Silwan and another one in Jabal Mukabar on Wednesday.
OCHA statistics: Since the beginning of the year, 235 Palestinian structures were demolished in Jerusalem alone. 126 of the owners had to demolish the structures themselves to avoid paying a fine.

Throughout the West Bank
The Israeli army blocked time and again this week all three entrances to the village of Burqa, where dozens of Palestinians were wounded following the settlers’ march to the outpost of ‘Homesh’ – but Palestinian youngsters removed the blockages. Last Saturday, again the settlers went on a march to ‘Homesh’, and the occupation forces once again secured them by closing down Burqa, whose villagers own the lands on which the illegal outpost was set up. The villagers tried to break the siege, and the army responded firing rubber-coated bullets and teargas.
On Thursday, a farmer from Bourin discovered that 45 olive trees, about 70 years old, had been cut down on his land and in neighboring groves.

Demolitions throughout the West Bank
The occupation forces demolished 3 structures in Habla and 2 in Azoun (both in the Qalqiliya district) on Monday.

This entry was posted on Sunday, January 2nd, 2022 at 18:31 and is filed under Activities, Activity Spotlight, English. You can follow any responses to this entry through the RSS 2.0 feed. Both comments and pings are currently closed.