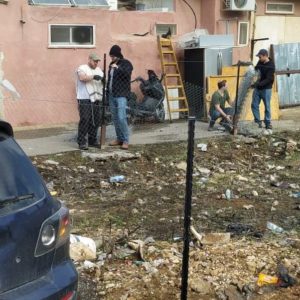 Settlers fenced in a yard under the home of a Palestinian family facing imminent eviction in the Sheikh Jarrah neighborhood of East Jerusalem, and initiated harsh frictions: on Friday policemen violently dispersed Palestinain residents and activists gathered for a prayer-protest there, arrested three and wounded a journalist, then proceeded to assault demonstrators in the weekly protest vigil, and arrested an activist; Occupation forces prevented Palestinians from plowing their privately owned fields throughout the South Hebron Hills this week, confiscating tractors and detaining farmers on false claims; at the same time, several new ranch-outposts were erected this week in the South Hebron Hills and in the Palestinian Jordan Valley; Gangs of Jewish terrorists hurled stones at Palestinian vehicles on West Bank roads after the terrorist attack near Homesh outpost, and about 15 of them broke into a family home in the Palestinian village of Qaryut, smashed the house’s contents and wounded its owner; Israeli soldiers killed 31-year-old Jamil Kayal during an arrest raid in Nablus

South Hebron Hills
In a premeditated operation, on Monday, December 13 at dawn, settlers invaded privately-owned Palestinian lands near the village of Mufaqara, east of ‘Avigail’ outpost, and planted dozens of trees. On Thursday, December 16, three agricultural invasions were located and documented in the same area, where trees had been planted and a drip irrigation system installed.
The occupation forces, on the other hand, concentrated their efforts this week in preventing the Palestinian residents of the region from plowing:
On Wednesday, December 15, they confiscated the tractor of a Palestinian farmer plowing his land at Mufaqara, and even detained three Palestinians on the false claim of uprooting settlers’ olive trees; the three were released that evening but were required to place a sum of 500 shekels each as bail. Two Mufaqara villagers, a father and son, were summoned for questioning on Sunday, December 19, charged with trespassing and assault.
On Thursday, December 16, the Palestinian landowner came to Umm Al Arais to plow, in coordination with the Civil Administration, but was detained under instructions of settler-colonists. The two tractors he had employed for the plowing were confiscated, and a closed military zone was declared. A Civil Administration official then affirmed that the field was privately owned. The Palestinian owner and his family continued working, accompanied by an activist, but since the confiscation was ‘carried out by inspectors’ – the tractors were not returned.
On Friday, plowing around Mufaqara went unhampered. However, during plowing of lands in Harouba, the Israeli army detained a Palestinian farmer and was about to confiscate his tractor, but following clarifications, the farmer and his tractor were released. On Saturday activists accompanied plowing at Mughayer Al Abid, unhampered.
The occupation forces raided Khalat Al Furun on Tuesday, December 14, and demolished farming terraces and a new water hole. The next day, 4 work-stoppage orders were issued in Susyaw – for a playground, an old water hole, a new dwelling, and a sheep pen.
Close to Um Al Kheir, activists discovered on Saturday large-scale earth works conducted by settlers: a track 400 meters long was opened, with concrete surfaces at its end, and alongside it a ditch for infrastructure, electricity and water, probably as preparation for a new shepherd ranch-outpost.
Large forces entered the terrorist outpost ‘Havat Maon’ on Thursday, and apparently demolished a tent there.

Palestinian Jordan Valley
All through the area, construction of new outposts was documented this week, aiming to push the Palestinian shepherds out of the meager grazing grounds still left for their use. Around Auja, a new outpost was documented east of the ‘Mevo’ot Jericho’ settler-colony on Sunday, December 12. The next day it was removed, probably due to activists’ documenting and reporting to Knesset Members and the media.
In the Hamra area, too, a new outpost was documented on Mount Kabir on Thursday.
Most days this week, activists accompanied shepherds of Hamra and Samara in the northern Palestinian Jordan Valley, and in the Auja and Dyuk area in its southern part. In Samara on Monday, December 13, a soldier from the base close to the grazing ground threatened to arrest two activists. The next day, Tuesday, the violent settler from the outpost close to Hamra dispersed a Palestinian shepherd’s flock, and on Wednesday the same settler and his mates attacked the shepherd and the activists accompanying him, beating them up, throwing stones and dispersing the flock. The police arrived and detained two activists and a settler.
Activists helped with farm work in Khalat Makhoul on Thursday, Friday and Saturday.

Jerusalem
On Wednesday, December 15, settlers arrived in Sheikh Jarrah and fenced the yard under the home of a Palestinian family who had recieved an eviction order for December 29. The Palestinian residents summoned the police, but their protests did not help stop the works. On Friday, residents and activists convened in the yard and held prayers. The police violently dispersed the participants. Three people were arrested, and a journalist wounded by the policemen needed medical attention. From there, the police proceeded to violently assault the weekly protest vigil that took place in the neighborhood, grabbed Palestine flags from demonstrators, prevented Member of Knesset Cassif from speaking, and arrested an activist.
House theft continues in the Old City of Jerusalem as well. On Wednesday, family members whose mother had passed away a week before, received a condolence letter from Eli Attel, a settler employed in Judaizing the Muslim Quarter of the Old City, in which he informed them they must evict their house (where they had lived with their mother) by court ruling.
On Friday, a Jew was arrested in the Old City suspected of attacking a Palestinian.

Demolitions in Jerusalem
On Tuesday, the occupation forces demolished two dwellings in Silwan and one in Jabal Mukaber.

Throughout the West Bank
Israeli soldiers killed 31-year-old Jamil Kayal with live fire during an arrest raid in Nablus, on Monday. Three more Palestinians were wounded. The army reported 27 Palestinians arrested that night throughout the West Bank and in East Jerusalem.
On Thursday, December 16, following the shooting attack near the outpost of ‘Homesh’, gangs of settler-colonists set out to hurl stones at Palestinian cars near ‘Yitzhar’, as well as near the village of Beita, on whose lands the terrorist outpost ‘Evyatar’ was erected, and in the Hebron area. At 3 a.m., about 15 Jewish terrorists broke into the home of a family in the village of Qaryut, smashed and trashed the entire contents of the house, clubbed the woman and wounded her husband, who was removed to hospital after the terrorists got away unharmed. It was also reported that houses and fields were set on fire in Burqa village (Nablus district) near ‘Homesh’.

Demolitions throughout the West Bank
On Tuesday, the occupation forces demolished two structures in Hebron, and on Wednesday they demolished one in Burqin (Salfit district), and one in Nabi Samauil (Jerusalem district).

This entry was posted on Sunday, December 19th, 2021 at 15:30 and is filed under Activities, Activity Spotlight, English. You can follow any responses to this entry through the RSS 2.0 feed. Both comments and pings are currently closed.