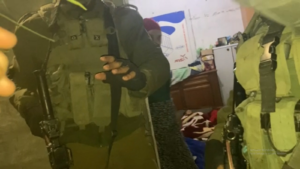 Eighth Palestinian killed in demonstrations protesting the landgrab in Beita village: Israeli soldiers shot 31-year-old villager Jamil Abu Ayash in the head on Friday; three Touba villagers were arrested in the middle of the night during an army raid on their village, in response to their attempt to resist settlers’ invasions of their fields; Jewish terrorists from ‘Havat Maon’ beat Touba children on their way from school in front of soldiers escorting the children – the Palestinian activist who accompanied the children was arrested; the Israeli Civil Administration approved 24 out of 2,550 applications for construction permits submitted by Palestinians living in Area C during the past 5 years, as opposed to 8,356 permits issued to Jewish settlers over the same period – 384 times more; a violent settler riding an ATV sped into a Palestinian flock at Hamra – the Palestinian shepherd and an activist who tried to block the ATV with his body were arrested

photo: Armed soldiers try to prevent the documentation of their invasion of a Palestinian family home in Touba at 3 a.m., December 7, 2021

South Hebron Hills
Settlers from ‘Carmel’ began expansion works this week on privately-owned and tended Palestinian lands of the village of Umm Al Kheir. On Sunday and Monday mornings, villagers and activists succeeded in making the army put a halt to these pirate works. However, on Monday noon, the works were continued into the night, backed up by the army, who chased away the landowners with a ‘closed military zone’ order and stun grenades. That same day, Monday, settlers chased away an Umm Al Kheir shepherd from his grazing grounds near ‘Carmel’.
Army forces raided the Touba community at 3 a.m. Tuesday, December 7, and arrested three Palestinian villagers following the accusations of settlers who invaded the village last Saturday. The soldiers tried to prevent activists sleeping there from filming the raid. The arrestees disappeared for a long time, and only after 8 hours did they finally arrive at the Kiryat Arba police station (half-an-hour’s drive from the village). They were released on bail after 2 days, at the end of legal proceedings at ‘Ofer’ prison. At the same time, on Tuesday morning once again settlers with their flock invaded and damaged fields that had just sprouted and belong to the villagers. Activists staying there chased the settlers away and summoned the police.
The Israeli army continues to sabotage its own duty, ordained by the Knesset (the Israeli parliament) committee, to accompany Touba children to and from their school. This Tuesday, only one soldier reported on this duty, without a vehicle. The next day, December 8 at noon, settlers waited for the children at the meeting point and attacked them. They kicked and beat the children in front of the soldiers – who arrested the children’s Palestinian accompanier, and detained one settler. The children’s families filed a complaint at the Hebron police station.
On Wednesday, settlers and their flock from ‘Mitzpe Yair’, escorted by Israeli army, invaded privately owned Palestinian lands inside the firing zone near Simra, but left when the landowners arrived. That same day, Wednesday, the army tried to prevent a Palestinian family from plowing its land in Wadi Swaid but retracted following the intervention of activists and an attorney. On Thursday, a group of activists on patrol discovered an invasion by settlers with saws of a field officially out of bounds to Israelis, in Susya. The activists documented the settlers vandalizing olive trees and chased them off.
Activists accompanied the Palestinian landowner to Umm Al Arais on Saturday, unhampered. They also accompanied surveyors in the area, and upon seeing settlers setting out to attack them they summoned the police, who enabled the surveyors to complete their work. In Wadi Swaid, activists accompanied plowing on Saturday unhampered. In Humra, near Tawane, settlers and their flock were discovered invading a Palestinian field officially closed to Israelis, and activists managed to make the army remove them. In nearby Hali, too, settlers and their flock invaded privately-owned and tended Palestinian fields, and activists made the army remove them.
The occupation forces demolished two rooms in Zif village on Monday, December 6, as well as 2 rooms and a water hole in Buyeb.

Palestinian Jordan Valley
Most days this week, activists accompanied Palestinian shepherds of Khalat Makhoul, Samara, Hamra and Farisiya in the northern Palestinian Jordan Valley, and around Auja in the south, unhampered.
However, on Sunday, December 5, the violent settler-colonist from the ranch near Hamra again harassed a Palestinian shepherd and his flock, set a drone on them and sped into the flock on his ATV. One of the activists blocked the vehicle with his body, the settler summoned soldiers who detained the shepherd and the activist. They were both released conditionally after being questioned at the Binyamin police station, and the shepherd was forbidden to graze near his home. On Thursday, settlers vandalized the vehicle of activists accompanying shepherds near Samara.
In the Auja area, Jewish terrorists from the new outpost near ‘Mevo’ot Jericho’ continue to harass Palestinian shepherds. On Wednesday, a settler with his dog chased a Dyuk shepherd after he took leave of activists who had accompanied him, and threatened him with a stone.
The occupation forces demolished a structure intended for dwelling in Humsa on Sunday, December 5.

Jerusalem
Jewish terrorists attacked a Palestinian driver who was going through Sheikh Jarrah in his car on Thursday, December 9, with stones and pepper spray, and vandalized other cars belonging to Palestinians in the neighborhood. The driver needed medical attention. The police arrested two suspects in this attack, both 16-years-old.
Dozens of activists demonstrated along with A-Tour residents on Friday in protest of the threathened demolition of a 5-story apartment building in this neighborhood, inhabited by dozens of people, among them many children as well as eldery and disabled. The weekly protest vigil at Sheikh Jarrah also took place that day, this time without police interference.
During the night between Saturday and Sunday, December 12, about 20 masked Jewish terrorists were documented throwing stones and vandalizing cars at the Bab A-Zahara neighborhood of East Jerusalem.
On Sunday the occupation forces demolished 3 buildings in Beit Jalla.

Throughout the West Bank
On Friday, December 10, during the weekly demonstration against the theft of lands belonging to the Palestinian village Beita (Nablus district), occupation soldiers shot 31-years-old Jamil Abu Ayash in the head. He died of his wounds. The Red Crescent reported 68 people wounded and cared for during this week’s demo. Jamil Abu Ayash is the eighth Palestinian killed during the demonstrations protesting the criminal outpost erected on Beita lands since May.

*
During 2020, the Civil Administration issued 797 demolition orders for Palestinian structures throughout Area C, the highest number in the past five years. During the previous year, demolition orders were issued for 643 houses.
Between 2016 and 2020, 24 construction permits were issued out of 2,550 applications, namely – 0.94%. During the same time, construction permits for 8,356 apartments were approved to be built in the West Bank settler-colonies – 384 times the number of permits issued to Palestinians.
These data were given out by the Civil Administration following a request for the freedom of information filed by the ‘Bimkom’ association.

This entry was posted on Sunday, December 12th, 2021 at 17:17 and is filed under Activities, Activity Spotlight, English. You can follow any responses to this entry through the RSS 2.0 feed. Both comments and pings are currently closed.