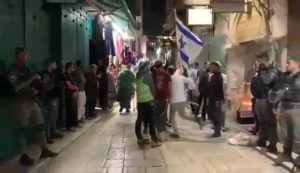 A settler tried to invade Tawane – activists staying in the village were accused by police of assaulting him and kept two days in custody, while army forces raided Tawane and confiscated computers, cameras and a car, all without a warrant; In Touba, settlers invaded village fields with their cattle causing severe damage, but the Israeli army distanced the Palestinian villagers and arrested one of them; Jerusalem police, equipped with a search warrant signed by judge Elad Lang, raided twice in a week an apartment inhabited by leftist activists suspected of spraying pro-Palestinian graffiti in town; Settler-thugs vandalized property in Saroura in the South Hebron Hills and in the village of Makhmas near Ramallah; The occupation forces went on another demolition rampage this week, both in the South Hebron Hills and in East Jerusalem; Celebrating Hannukah, settlers rioted in Sheikh Jarrah backed up by the police, placing a Hannukah lamp at the door of the Al Kurd family who are threatened with expulsion;

photo: The lords of the land celebrate, backed up by the army and police, in the Old City market, Jerusalem, Hannukah 2021

South Hebron Hills
On Monday morning, November 29, villagers of Saroura discovered that heavy damages were caused to structures and equipment there, including a broken concrete floor and torn tin roof, cut water pipes and an outhouse smashed. The same day, settlers tried to prevent ploughing in the fields belonging to a Palestinian family in Susya, but the Palestinians managed to complete their work. On Friday, too, settlers tried to prevent ploughing in Susya fields and entered a field that is closed by official writ to Israelis. At the demand of the inhabitants and activists, the army ordered the settlers out but denied the Palestinians access to a privately owned water hole on their land. On Saturday, the settlers made another attempt to prevent ploughing there, but the army allowed the work to continue.
A settler from ‘Havat Maon’ tried to invade Tawane village on Wednesday, December 1, and when the villagers prevented this and summoned the police, the invader complained he was attacked. Israeli police picked up for questioning 3 activists staying in the village and uninvolved in the incident, and at the police station the three were detained and accused of assault. In the evening, large forces invaded the village, searched, and confiscated much equipment in both Palestinians’ and activists’ homes. Computers, cameras and a car belonging to the activists were confiscated without a warrant, and another activist was taken in custody when she brought the policemen the car keys they demanded. She was released after midnight with a distancing order. The other 3 activists were released only on Thursday evening, by ruling of the district court, who also removed the house-arrest and distancing order issued them.
On Thursday, while accompanying Touba schoolchildren home from school, a Palestinian activist discovered settlers with their flock grazing on his privately owned land, and was attacked by the settlers. The police arrested him and one of the settlers.
Touba villagers summoned activists on Saturday morning, December 4, following the invasion of settlers with their flock to private fields that had just sprouted. The invaders caused heavy damages and violently threatened villagers who tried to distance them, then summoned their buddies who rode into the village on a mini-tractor. Army forces arriving there violently distanced the Palestinians from their own lands. One of the Palestinians was taken in for questioning. The settlers left unharmed. The same day, activists managed to prevent more settler invasions at the site. The activists documented 3 new buildings erected by the outpost thugs at various spots east of the violent outpost ‘Havat Maon’, all inside the area called ‘firing zone 918’.
Activists accompanied Palestinian shepherds grazing on Atariya land unhampered on Saturday, as well as the Palestinian landowner at Umm Al Arais on his weekly vigil there.
On Thursday, December 2, the occupation forces demolished 4 homes and 3 sheep pens in Markaz (firing zone 918) and left 20 people homeless. The forces exerted violent force and hurled stun grenades.

Jerusalem
The settlers invading Sheikh Jarrah placed a Hannukah lamp on Tuesday at the door of the Al Kurd family, who are threatened with expulsion from their home. With police backing, they held a riot in the neighbourhood and prayed there. On Friday, the weekly protest vigil took place unhampered except for provocations and slurs of rightist thugs.
Twice within one week, the Jerusalem police raided an apartment in the centre of town inhabited by three leftist activists. One of these raids was held at 3 a.m. Magistrates’ court judge El’ad Lang signed a search warrant on grounds of ‘suspicion of vandalizing property’ – which in fact referred to spraying graffiti supporting Palestinians in town. The judge also approved of searching ‘suspect’ computers.

Jerusalem demolitions
The occupation forces demolished a building in Anata on Monday, and on Wednesday 3 buildings – one of them a dwelling – in Walajeh, and a building in Abu Dis.

Throughout the West Bank
Villagers of Makhmas (Ramallah district) on whose land the settler outpost ‘Ramat Migron’ was built, discovered on Tuesday that Jewish terrorists had punctured the tires of over 10 cars in the village and sprayed ‘Revenge’ in Hebrew on house walls.

Demolitions throughout the West Bank
On Sunday, November 28, the occupation forces demolished a building at Khirbet Atouf (Toubas district). On Tuesday they demolished a water reservoir at Nialin (Ramallah district, and on Wednesday 2 structures at Nahalin (Bethlehem district).

This entry was posted on Sunday, December 5th, 2021 at 17:46 and is filed under Activities, Activity Spotlight, English. You can follow any responses to this entry through the RSS 2.0 feed. Both comments and pings are currently closed.