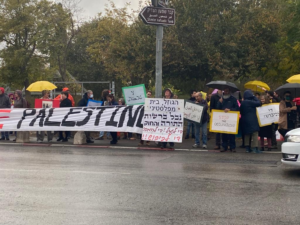 Terrorists from the evecuated settlement ‘Homesh’ attacked and wounded Palestinian farmers in Burqa village (Ramallah district); The outpost ‘Ramat Migron’, demolished on Wednesday, was re-erected the next day; The occupation forces continued demolitions, confiscations and road blocking in the South Hebron Hills this week, while settlers from the criminal outposts in the area continued their expansion work unhampered, invading privately-owned Palestinian fields and harassing Palestinian children on their way from school;

South Hebron Hills
Army and police forces with heavy equipment arrived at the Palestinian village Rafa’iya on Monday, demolished and confiscated a sheep pen, wrecked foundations and floor of a structure under construction, and continued to the village Zif, where they confiscated an agricultural tin shack.
The same day, Monday, settler-colonists from the criminal outpost ‘Havat Maon’ did expansion work unhampered, and placed posts around the woods which they took over, close to a house on the outskirts of Tawane. The next day, Tuesday, a terrorist with a flock from ‘Havat Maon’ arrived at the Touba children’s meeting point with the Israeli soldiers assigned to protect them from the outpost thugs on their way to and from school in Tawane. The settler harassed the children. The army declared a closed military zone, distanced activists and arrested a Palestinian who defended the children. The activist was released that night from the Hebron police after depositing bail. The Palestinian landowner was questioned under warning when he came to give evidence.
On Thursday, November 18, military forces accompanied by a bulldozer roamed the South Hebron Hills, blocking roads – among others, those leading to Umm Darit, Darat, and Zif, as well as two roads from the ‘Yisachar Man’ ranch to a new vineyard planted by settlers. The settlers opened these blockages that same night.
That day, Thursday, settlers accompanied by soldiers returned to the spot where they tried to put up an outpost last week on the land of Simara village.
On Thursday, at Hali, near Tawane, a settler with a flock invaded privately owned Palestinian lands, officially closed to Israelis, and was distanced by the army that declared this a closed military zone. The local Palestinians lodged a complaint with the police.
On Saturday, activists accompanied the Palestinian landowner in Umm Al Arais and helped farm works in Susya.

Palestinian Jordan Valley
Most days this week, activists accompanied Palestinian shepherds in Khalat Makhoul, Farisiya, Hamra, and Samara in the northern part of the Jordan Valley, and Auja in the south. Grazing went relatively unhampered. However, on Sunday, November 14, Palestinian shepherds and activists documented the terrorists from the outposts near Auja setting fire to grazing grounds where some scant grass was still growing. The settler-colonists also discarded a carcass of a sheep in a field where some grass was left for the flock.
About 60 Israeli and Palestinian activists joined a work day in the northern Palestinian Jordan Valley on Friday, and cleared four water holes in three local communities.

Jerusalem
On Tuesday, the Jerusalem police detained 3 activists who hung up banners protesting violence against Palestinians and landgrab in the area of Yatta, in the South Hebron Hills. The activists were released with a distancing order for 14 days. The police officer wrote that “they are active for Yatta which is in the South Hebron Hills, and therefore Jerusalem is not an area where the main social struggle takes place, and the banners are written in Arabic”.
That day, Tuesday, the occupation forces demolished a structure in the neighborhood of Ras Al Amoud.
The weekly protest vigil at Sheikh Jarrah took place on Friday without any special events.

Throughout the West Bank
On Monday, November 15, terrorists from the outpost rebuilt on the site of the ‘dismantled’ settler-colony of ‘Homesh’ attacked Palestinian farmers from the village of Burqa (Ramallah district), wounding them with blows and stones. Two Palestinians were hospitalized. A researcher of Yesh Din who accompanied the farmers and was also attacked, reported: “We felt that we were in great danger and might not come out of this alive. A group of people chased us and I heard one of them shooting in the air.” On Thursday, it was reported that settlers were re-erecting the outpost of ‘Ramat Migron’ near Burqa, an outpost that had been dismantled only a day earlier.
On Monday, November 15, the Occupation Forces demolished 4 structures in Salfit. On Tuesday, November 16, they demolished 7 structures in Khirbet Jarara (Hebron district). 4 of them were inhabited dwellings.

***
On the night between Saturday and Sunday (November 14), Judeo-Nazis attacked with knives and explosives two Arabs, one of them in a wheelchair, and two Jewish women who were sitting together in a public park in Bat Yam. The two Arabs and one of the Jewish women were wounded and taken to Wolfson Hospital.

This entry was posted on Sunday, November 21st, 2021 at 16:23 and is filed under Activities, Activity Spotlight, English. You can follow any responses to this entry through the RSS 2.0 feed. Both comments and pings are currently closed.