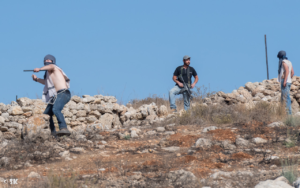 Jewish terroists wounded 6 Palestinians in Simara (South Hebron Hills) with gunfire and beaings and set fire to vehicles and a building, after the military force present distanced activists and left the ground to the assailants; The Israeli army enabled terrorists from the settler-colony ‘Bat Ayin’ to attack and wound activists and Palestinians who were harvesting olives in coordination with the army near Surif village; Terrorists from settler-colony ‘Yitzhar’ attacked and wounded Palestinians and killed a sheep during a coordinated olive harvest near Huwwara; Settlers invaded fields, broke into caves, destroyed property and opened criminal tracks throughout the South Hebron Hills this week; The Israeli army raided a film festival in Ramallah (Area A) and honored the guests with a performance of stun grenades and teargas

South Hebron Hills
Two women and a man, villagers of Tha’ale, who were attacked and wounded by Jewish terrorists from the settler-colonist outpost ‘Havat Man’ on Sunday morning, November 7, came that evening to the Hebron police station to lodge a complaint. Another shepherd who was attacked a day earlier and was called upon to report for questioning was released on bail. The same day, a villager of Wadi Thawamin discovered that settler-colonists broke into his dwelling cave and caused much damage, and he too lodged a complaint with the police.
The Jewish terrorists’ assaults in the region reached a peak on Wednesday, November 10. They broke into a Palestinian structure near Simara, inside firing zone 918, stole property, destroyed and damaged and erected a tent nearby. The army arrived, instructed them to dismantle the tent, issued a ‘closed military zone’ order and chased away activists and Palestinians – but allowed the Jewish terrorists to stay. As soon as the army left, many settler-colonists came back with camels, donkeys, a mini-tractor, and several vehicles. They attacked Palestinian villagers and activists with stones and firearms, including an M16 rifle, completely destroyed 3 cars, and tried to set the Palestinian structure on fire. 6 Palestinians were wounded, some from gunfire, and needed medical attention, an ambulance was hit by gunshots and its windshield was smashed. The attack lasted from the afternoon until after midnight. The occupation army came and went, and when it finally returned, it distanced the Palestinians and the activists but left unhampered the Jewish terrorists, who set fire to the Palestinian structure in the presence and view of Israeli soldiers.
On Saturday, November 13, large army forces equipped with official orders blocked roads in the South Hebron Hills. Their mission was to stop activists on their way to a solidarity-activity with Palestinian Susya’s children on the village’s playground, which was occupied by settlers and soldiers last week. Some activists were detained, and others managed to bypass the barriers and reached the playground. A gang of settler-colonists tried again to invade the place but was distanced by the army. The settlers, armed with clubs, were getting ready to come down to the village after the army left, but the presence of many activists there held them back.
The same day, Saturday, terrorists from the settler-colony ‘Havat Maon’ invaded a water hole in a Palestinian area that is officially closed to Israelis, near the Palestinian village of Tawane. One of them entered the water hole naked. An army force arriving there let them stay until activists arrived, and only then distanced the invaders.
The occupation forces demolished a large structure in Kalkas (Hebron district) on Thursday. The same day, a demolition order was issued for an old access road to Shaab Al Butun. The next day, Friday, large forces invaded the village of Tawane, searched the home of the local council head, and caused extensive damge. From there they proceeded to search at the villages of Mufaqara and Qawawis. In Tawane, too, a cessation of works order was issued this week for a dwelling compound, by an officer of the Civil Administration.
The ’agricultural’ invasions near settler outpost ‘Avigail’ continued this week. A Palestinian landowner came to document the invasion to his fields on Monday, and was immediately blocked by large army forces. On Tuesday, a settler flew a drone above a Palestinian flock that grazed there, and scared the sheep. On Saturday, while accompanying the landowner on Umm Al Arais lands, activists discovered that the settlers of ‘Mitzpe Yair’ outpost had opened a new track road eastward, into firing zone 918.
The military accompaniment for Touba children to school and back was late again on Monday, Tuesday and Wednesday. In two cases, settlers from the terrorist outpost ‘Havat Maon’ waited for the children at the meeting point and harassed them.
The investigators of Israel’s Hebron Police tried to intimidate a Palestinian activist with false claims on Monday, when he was testifying against a settler-colonist. The same activist was questioned on Thursday at the Hebron police station following a false accusation by a settler-colonist.

Palestinian Jordan Valley
Activists accompanied shepherds unhampered most days this week around Auja, Hamra, Samara and Khalat Makhoul. At Samara soldiers tried to prevent grazing on Monday upon false claims of the area being a firing zone, but the next days the shepherds were left in peace. However, around Auja, the settler-colonist from ‘Havat Omer’ chased away the flocks by directly calling the shepherd on the phone, and the army detained another shepherd and her flock for half an hour at the checkpoint on their way back.
On Thursday, about 20 diplomats arrived in Khalat Makhoul on a B’Tselem tour.
The occupation forces demolished 4 structures in En Al Hilwa on Monday, November 8.

Jerusalem
On Sunday, during a protest demonstration held by settler-colonists concerning the death of Ahuviya Sandak, Judeo-Nazis laid siege on Arab employees of a gas station, threatened them with murder and shouted racist curses at them.
The weekly protest vigil at Sheikh Jarrah on Friday went without any special incident.

Demolitions in Jerusalem
On Tuesday at dawn, the occupation forces invaded the village of Walaje and demolished 3 homes, leaving 20 persons, among them 7 children and a pregnant woman, homeless. On Wednesday they demolished a structure at Beit Safafa and on Friday, a structure in Jabal Mukabar.

Throughout the West Bank
Severe settler-colonist attacks against Palestinians throughout the West Banks:
A gang of assailants from ‘Yitzhar’ attacked olive harvesters from Huwwara (Nablus district) with clubs and stones as the latter worked on their land in coordination with the Israeli army on Thursday, November 11. The terrorists wounded two Palestinian harvesters and then attacked a shepherd and his flock grazing nearby, killed a sheep by wooden stick blows, and wounded another three.
The next day, a gang of terrorists from ‘Bat Ayin’ settlement assaulted Palestinians and activists who were harvesting olives and working the fields near the village of Surif in coordination with the army. The soldiers left at noon, and enabled the masked settler-colonists to come down to the fields, wounding three activists with clubs and stones. The activists needed medical care. An armed security official was documented observing this activity alongside his attacking buddies.
In Al Bireh (Ramallah district) too, settler-colonists paid a visit and left damaged property, smear-graffiti and car tires punctured.
An Israeli army force raided a film festival in Ramallah (Area A) on Monday, November 8, attacking the audience with teargas and stun grenades.

***
Dozens of posters depicting the survival struggle of inhabitants of the Massafer Yatta region in the South Hebron Hills were displayed throughout Tel Aviv, Jerusalem and Haifa, protesting Israel’s ongoing attempt to expel the Palestinain population from the area by turning it into a military maneuver ground (firing zone 918). Over 100 Israelis took part in this operation. Some of them were arrested and kept in police custody all night.

This entry was posted on Sunday, November 14th, 2021 at 19:17 and is filed under Activities, English. You can follow any responses to this entry through the RSS 2.0 feed. Both comments and pings are currently closed.