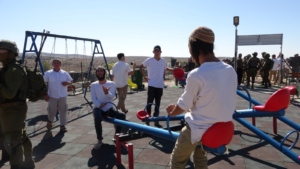 Susya settlers together with Israeli armed forces occupied on Saturday a playground in the Palestinan village of Susya; The occupation forces killed with live fire Mohammad Amjad Da’adas, a 13-year-old from Deir Al Khatab, during the Friday demonstration against robbery of the village lands; Over 60 Palestinians wounded by the Israeli army’s violence in the weekly demonstrations throughout the West Bank; Two Israeli activists were arrested and beaten up by soldiers in a demonstration at Beita village; Break-ins and invasions, equipment thefts, attacks and woundings of Palestinians in the South Hebron Hills by settler-terrorists; Settlers beat up a boy grazing his flock at Khalat Makhoul, in the Palestinian Jordan Valley; Settlers’ theft of olive harvests and sabotage of olive trees and harvesters went on this week throughout the West Bank.

South Hebron Hills
Settlers broke into a cave in Sarura during the night between Sunday and Monday, and stole a generator and much equipment. The next night they returned, cut water pipes and damaged property. On Friday, a military force paid a visit to the cave at the bidding of a settler from ‘Havat Maon’.
The army’s regular tardiness in accompanying the Touba schoolchildren to school and home near the terrorist outpost of ‘Havat Maon’ continued this week. On Sunday, October 31, after waiting nearly two hours in the cold and rain, the children had to return home accompanied only by a local activist, and suffered harassment from a settler woman who drove her car behind them. The return accompaniment by the Israeli army was late again on Wednesday and Thursday.
On Wednesday, November 3, the occupation forces demolished a home in Jawiya, housing 12 family members (the father was killed in a workplace accident in Israel a year ago). Diplomats on a tour of the area organized by B’Tselem were present.
Another agricultural invasion into the lands of Mufaqara, near the outpost ‘Avigail’, was discovered on Friday.
Heavy army forces helped the settlers of ‘Susya’ to take over a playground in the Palestinian village of Susya. Palestinian villagers and activists came Saturday morning to document criminal construction of settler on their lands in ‘Giv’at Ha-Degel’ and ran into many settlers, who tried to block their way. The settlers then made their way to the village and tore out the gate to the playground; about 40 of them took over the playground and attacked villagers and activists, also turning a dog loose on a Palestinian child. Israeli army and police forces blocked the entrance to the playground for villagers and activists, and allowed the settlers to remain there for 20 minutes. An hour passed before the settlers were ordered out of the village; two of the assailing settlers were documented by a policeman and taken into a police car, but were released within minutes.
That Saturday, activists returned to clear the road to Bir Al Eid, blocked by settlers. 12 army vehicles, police, Civil Administration and Border Police arrived at the place but did not stop the work.
Activists accompanied the landowner in Umm Al Arais and ran into settlers from the nearby outpost, who had invaded the fields closed to Israelis by official edict. An army forces was present but took its time getting the settlers out of the fields. The activists also joined the olive harvest at Atariya and accompanied shepherds at Wadi Jheish unhampered.
On Saturday evening, settler-terrorists from the outpost near Th’ala came down the hill and attacked villagers. They then lodged a false complaint, as a result of which the occupation soldiers arrested a Palestinian villager, who was released that evening and summoned for questioning. The next day, November 7, the settler-terrorists wounded two women and a man from the village. The Israeli army declared a ‘closed military zone’ and chased away the Palestinians, allowing the masked assailants to remain on the spot, and returned to one of them the club he had used in his attack. The settlers also watered their flock from a privately-owned Palestinian waterhole, contrary to a previous ruling on the subject.

Palestinian Jordan Valley
Activists accompanied shepherds in the northern and southern parts of the valley all days of the week. On Sunday, Jewish terrorists attacked a Palestinian boy who was grazing his flock unaccompanied at Khalat Makhoul and beat him on the head. On Tuesday, his family and activists who came to lodge a complaint at the Binyamin police station, were made to wait there for hours.
On Monday, November 1, the occupation forces demolished 3 residential tents that had served a 9-person family (including 7 minors) in Hamamat Al Meyteh in the northern part of the Valley, near the village of Tyassir. The forces demolished 4 additional structures as well as solar panels, and punctured water tanks.
A shepherd from En Al Hilwa reported this week that the ‘Rotem’ settler-colony’s security official threatened him, among other things with killing his cows; the shepherd asked for activist accompaniment. A resident of Humsa also reported harassment by soldiers, who took away his ID and threatened him with the demolition of his encampment.
In Auja, activists documented a new track-road this week, opened by the privileged settler of ‘Havat Omer’ outpost, and designating yet another improvised ‘border’ for Palestinians of the area, most of whose grazing grounds have already been robbed from them the same way.

Jerusalem
On Monday, November 1, dozens of Judeo-Nazis attacked an Arab young man on Yafo Street, at the city’s center, and beat him up.
The occupation forces demolished two houses in Jabal Mukabar and one in Beit Hanina on Wednesday, November 3.
On Friday, Jerusalem policemen attacked a demonstrator at the protest vigil in Sheikh Jarrah and violently seized a Palestine flag she was holding.

Throughout the West Bank
The Civil Administration’s Planning Committee approved on Monday all construction plans for 6 Palestinian villages presented to it, comprising 1,300 dwellings. The approval is meant to serve the Israeli government as ‘balance’ for the construction permits issued the previous week for 30,000 dwellings in the settler-colonies throughout the Occupied Territories, as well as the ongoing criminal construction of settlers’ outposts and ranches.
On Wednesday, November 3, Israeli soldiers chased away Palestinian activists with stun grenades when the latter came to help olive harvesters near Tqo’a village and protect them from settlers’ violence (the Palestinian Authority’s ‘Faz’a’ project). A South African diplomat was present at the event.
The next day, Thursday, the occupation forces demolished a mosque in Duma along with an agricultural structure, 3 water tanks and 50 fruit trees. They also destroyed a sheep pen in construction.
On Friday, in the course of olive harvest on Surif village’s lands, close to the terrorist outpost ‘Bat Ayin’, the outpost’s bullies violently assaulted the harvesters and activists who joined them. Several were wounded and vehicles were damaged.
Also on Friday, volunteers of ‘Rabbis for Human Rights’ joined the olive harvest at Klil Village (Nablus district). The harvest in one grove went unhampered; the other grove, whose owner is prevented from entering without permit by the Israeli army, had been harvested by settlers, who had paid a visit a few days earlier and stole the entire crop.
The occupation forces killed a 13-year-old Palestinian, Mohammad Amjad Da’adas, shot by live fire to his belly, in the weekly Friday protest demonstration in the village of Deir Al Khatab (Nablus district). The same day, the Red Crescent reported 61 Palestinians wounded from teargas, 5 from rubber-coated steel pellets and another 6 from beatings, in the weekly demonstration at Beita, Beit Dajan and Deir Al Khatab. In the weekly demonstration protesting the landgrab of Beita village, the occupation forces arrested two Israeli activists, took them into an army vehicle and beat them up. The two were released unconditionally and needed medical attention.
Farmers from the Palestinian village of Bourin discovered on Friday that all the trees in their groves, about 50, were cut down. Some of the trees were over 70-years-old. On Saturday, terrorists from ‘Giv’at Ronen’ outpost came down to Bourin and threw stones at a dwelling in which a family with children was present at the time, while Israeli soldiers stood and watched.
Since the beginning of the harvest season, researchers of Yesh Din have documented 35 violent settler-colonist attacks related to the olive harvest: 8 cases of attacking harvesters by Israeli citizens; 8 cases of damaging olive trees, including cutting them down, burning them or uprooting them; 15 cases in which olives were harvested and stolen; and 4 cases of disrupting the harvest or blocking access to the groves.

This entry was posted on Sunday, November 7th, 2021 at 19:10 and is filed under Activities, English. You can follow any responses to this entry through the RSS 2.0 feed. Both comments and pings are currently closed.