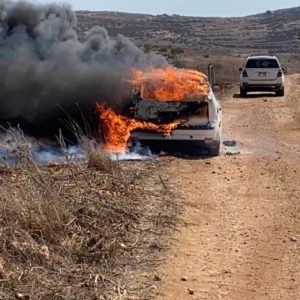 photo: A Palestinian vehicle set on fire by terrorists from ‘Amichai’ outpost in an attack against Palestinian olive harvesters, Turmusaya, Saturday, October 12, 2021

The Israeli police, under orders of a settler, arrested a Palestinian mother from Khalat Makhoul in the Palestinian Jordan Valley, prevented her from breast-feeding her baby for 4 hours and released her that night without charges; An illegal water tower erected by settlers on Palestinian land in Atariya was connected to the nationl water grid by Israel’s water company ‘Mekorot’; Jerusalem police feeds the flames around Damascus Gate by violence, ‘skunk’ cannons and arrests of Paelstinian youth; The Bibist gang from Balfour appeared in Sheikh Jarrah’s weekly protest vigil on Friday, cursing ‘leftist traitors’ with giant loudspeakers and calling to Palestinian passersby “Arab dog!”, all under the aegis of the Border Police; Jewish terrorists from ‘Amichai’ outpost attacked Palestinian farmers with clubs and stones, set their vehicle on fire and wounded three, who were hospitalized; Throughout the West Bank, another week of brutal attacks by Jewish terrorists against Palestinian olive harvesters and groves, under the aegis of the Israeli army; UN organization OCHA reports over 1,400 trees vandalized or their crops stolen since the beginning of the current olive harvest season in the West Bank

South Hebron Hills
The criminal development works of settler-colonists on Palestinian land in Atariya continued this week without any intervention on the part of the Israeli authorities, and on Wednesday the water tower they erected was connected to the ‘Mekorot’ grid – after an officer of the Civil Administration admitted to activists that this structure was illegally constructed. This Saturday the owners and local residents came back to demonstrate against erecting a water tower on their land. Large military forces blocked the way to the nearby outpost, ‘Mitzpe Yair’, preventing from Palestinians and activists from approaching the water tower and declared the area a ‘closed military zone’. The same day, Saturday, activists also joined the olive harvest on Atariya land, accompanied the landowner in Umm Al Arais to his fields, and took part in farm work at Umm Al Kheir.
At the new settler-colonist outpost near ‘Negohot’, this Monday illegal construction work was documented, taking place without the occupation authorities intervening, as they were busy demolishing a stone house built in Sika (near Dura), and 3 additional houses, one of them 3-stories high, at Farash Al Hawa near Halhul. On Wednesday, large military forces confiscated a gas station and four benzine and diesel containers in the village of Zif. The forces were accompanied by representatives of the Israeli army spokesperson.
The army accompaniers of Touba school children on their way home from school in Tawane were late again this week, on Monday and Wednesday.
On Saturday, an inspector of the Nature and Parks Authority arrested a Palestinian from Taban (in Massafer Yatta) and confiscated his car and phone. In the official form handed to the Palestinian no reason was mentioned for this confiscation, but it was written that the car upholstery was torn. The Palestinian was released at the police station without questioning, but his car and phone were not returned.

Palestinian Jordan Valley
This week the Israeli army and police reached a new low in the service of the settler-colonists harassing the Palestinian shepherd community at Khalat Makhoul when they arrested the wife of a shepherd in the encampment, separated her from her children, and in the Mate Binyamin police station, prevented her from breast-feeding her baby daughter for four hours. The woman was released without any accusations and ‘was transferred for continuation of procedures to the Palestinian police, that immediately released her. All days this week, activists had accompanied shepherds from Khalat Makhoul. On the night between Thursday and Friday, the activists remained overnight after inhabitants there reported nightly harassments. That night, at 1 a.m., settler-colonists broke into the encampment, threw a barrage of stones on the roof of a tin dwelling, and ran away. The inhabitants reported stone-throwing on the following night as well.
Activists accompanied Palestinian shepherds this week at Hamra, Samara and Auja. The violent settler-colonist near Hamra came to the grazing ground on Monday riding his mini-tractor, cursed and harassed the shepherds, and on Saturday sent a drone to scare the flocks. At Diyuk a settler-colonist from the new outpost near ‘Nevo’ot Yericho’ entered the village with his car on Thursday, and on Friday sent a drone from the settler-colony to harass the Palestinian flocks. Activists came to En Sukut Thursday after a threatening ‘visit’ by Israeli soldiers who took pictures of the encampment, questioned the inhabitants and photographed their IDs.
For the Haaretz story on the arrest of the Palestinian mother at Khalat Makhoul, see: https://www.haaretz.co.il/news/politics/.premium-1.10307353

Jerusalem
The Jerusalem police continues to fan the flames at Damascus Gate. On Monday, Tuesday, and Wednesday, dozens of Palestinians were distanced, beaten up and violently arrested, among them a woman journalist. On Tuesday alone the occupation forces arrested 22 Palestinian there. On Wednesday the police used ‘skunk’ cannons throughout the gate square and many children were arrested.
On Wednesday, the Attorney General presented his position on the eviction of Palestinians in the Batan Al-Hawa neighborhood in Silwan, adding up to the fact that he has no intention of intervening on the subject. On Monday, October 25, the Israel Supreme Court will review the appeal presented by the Dwaik family of the neighborhood, and discuss the implications for hundreds of Palestinian families facing ethnic cleansing in the neighborhoods of Silwan, Sheikh Jarrah, and East Jerusalem in general, on the basis of the Israeli apartheid laws that enable the return of property to Jews in East Jerusalem, while denying it from Palestinians who lost their homes throughout the country.
Facing the weekly protest vigil at Sheikh Jarrah, last Friday, October 23, a gang of Jewish fascists, among them several thugs familiar to us from the Balfour demonstrations showed up. They used loudspeakers to sound a string of racist curses and called out towards Palestinian passersby ‘Arab dog!”. The police and Border Police violently attacked the left-wing activists who were standing vigil, grabbed Palestine flags again, and threw to the ground women and elderly people.
The same day, Friday, large police forces accompanied by a helicopter invaded the neighborhood of Jabal Mukabar, held a violent search in a home and arrested 5 inhabitants on the grounds of attacking policemen. All the arrestees were released without questioning. The attested to being beaten up during their arrest.
On Thursday the occupation forces demolished a structure at the A-Tour neighborhood.

Throughout the West Bank
The Jewish terrorist outposts throughout the West Bank continued this week in their robbery and destruction wave typical of the olive harvest season. On Tuesday, October 19, a villager of Karyut (Nablus district), who came to his groves to harvest in coordination with the Israeli army, found a settler-colonists harvesting his olives. Soldiers and Border Policemen present enabled the thief to exit the grove with his booty. 11 adult olive trees were uprooted whole and stolen as well. The grove is close to the terrorist outposts ‘Yishuv Ha’da’at’ and ‘Adei Ad’. The same day, dozens of olive trees were found killed by hoe blows on the land of Jaloud village (Nablus district), near the terrorist settler-colony ‘Shilo’. In Wadi Kana settler-colonists sent their cattle flock to vandalize an olive grove.
On Wednesday, Israeli army forces commanded by the ‘security officials’ of the ‘Brukhin’ settler-colony prevented Burkin (Salfit district) villagers from harvesting their own olive groves and chased them away from their land. The villagers returned there on Friday and refused to vacate the place until being able to harvest, despite the army’s attempts to chase them away. On Thursday, villagers of Mazra’at A-Qabaliya (Ramallah district) discovered that settler-colonists had cut down over 200 olive trees, most of them 40 years old, on their land.
On Friday, over 150 volunteers on the part of Rabbis for Human Rights and Zazim Organization joined the Palestinian olive harvest at Yasouf (Salfit district), as well as at Bourin, A-Sawiya, Awarta, and Kalil (all in the Nablus district). The harvest went unhampered.
A child with special needs was arrested by the Israeli army on Thursday, in Qalqiliya, shackled and blindfolded.
In Hebron, on Thursday, 31 new dwellings came under construction for settler-colonists in the heart of the Arab city.
On Friday, during a ‘routine operation for arrest of wanted men’ in Area A, an Israeli soldier was documented pleasurably smashing the wind shield of a car parked on the side of a road. An army SUV was documented damaging a parked car. The Israeli army’s response: “The commanders are looking into it.”
That same day, Friday, Israel’s Minister of Defense, Gantz, signed an edict against 6 Palestinian civil society organizations, among them human rights organizations such as ‘Al Haq’ and ‘Adameer’, and the Palestine branch of the International Society for Rights of Children. Gantz declared them ‘terrorist organizations’ functioning on behalf of the ‘Popular Front for the Liberation of Palestine’, and serving to finance it. International human rights organizations, among them Amnesty and Human Rights Watch, replied that this was a ‘shocking and unfair’ decision, constituting ‘an attack on the part of the Israeli government against the international movement for human rights.”
The weekly demonstrations protesting the theft of land from the villages Beita (Nablus district) and Beit Dajan (Salfit district) took place on Friday, with international activists taking part.
On Saturday, Jewish terrorists from the outpost ‘Amichai’, armed with clubs and stones, attacked Palestinian farmers from the village of Turmusaya. Three Palestinians were wounded and hospitalized. The terrorists burnt a vehicle there, and smashed windows of 4 additional cars.
According to the UN OCHA organization’s data, since the present early olive harvest season began on October 12, the villages around Nablus, Hebron, Salfit and Ramallah have seen over 1,400 trees, mainly olive trees – vandalized, or their crops stolen. Damage to another 200 trees was reported shortly prior to the beginning of the harvest season. Yesh Din researchers documented 26 events of settler-colonists violence since the season opened, among them 6 violent attacks against harvesters, uprooting and burning olive trees, robbing the harvested olives, and disturbing or preventing access of Palestinians to their olive groves.

This entry was posted on Sunday, October 24th, 2021 at 19:29 and is filed under Activities, English. You can follow any responses to this entry through the RSS 2.0 feed. Both comments and pings are currently closed.