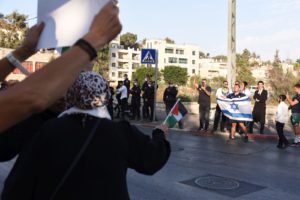 As the olive harvest season opens, Jewish terrorists come out of their outposts and settler-colonies to attack harvesters, sabotage olive groves, ignite and steal Palestinian olive crops throughout the Occupied Territories, while the Israeli army usually stands by and even backs up the terrorism exerted upon Palestinians; a terrorist from the ‘Havat Maon’ outpost fired his pistol in the air facing guests at a Tawane wedding, and was not arrested – the army arrested a Palestinian activist from the village, claiming he attacked and wounded a shepherd from the outpost who invades the Palestinian’s land on a permanent basis; Palestinians demonstrated in protest of pirate work and the erection of a water tower on the land of Atariya village; the Jerusalem police once again wreaked violent havoc at the Damascus Gate this week, and a policeman was documented beating up a Palestinian who approached him to complain that he had been beaten by another policeman

South Hebron Hills
This week settler-colonists pursued their nightly thefts on Atariya land. Heavy equipment dug a ditch from the water tower they had set up there and opened a new track during the night between Sunday and Monday. The next day, a Palestinian inhabitant noticed settler-colonists harvesting and stealing his olives close to that water tower. On Saturday, dozens of Palestinians and activists held a protest action against the theft at Atariya, and raised flags on that water, without intervention on the part of Israeli army forces present.
On Tuesday, works were documented re-erecting the violent outpost on lands belonging to Tawane village, a part of which had been dismantled by the settler-colonists the previous week. That day, sabotage was discovered to about 100 trees, among them various fruits and olives, on land belonging to a Palestinian family in Tawane.
On Friday occupation forces stopped Palestinian harvesting on the land of nearby Humra, after settler-colonists claimed that a shepherd from ‘Havat Maon’ had been attacked when invading those lands (closed to Israelis by an official edict) and his arm was fractured.
On noon that day, Friday, a terrorist armed with a pistol came out of the outpost and fired it in the air opposite Palestinian guests at a wedding taking place in a Tawane home. Later, dozens of settler-colonists crowded opposite that home, most of them armed. Army arrived, but did not arrest the shooting settler-colonist. At the same time, settler-colonists came down with their flock to Humra and grazed among the olive trees. The next morning, Saturday, Israeli soldiers charged Tawane and arrested a Palestinian activist who was accused of breaking the arm of the settler-colonist who regularly invades the village lands.
On Saturday, Israeli soldiers prevented a Palestinian family from drawing water out of a water hole it owns during an olive harvest at Humra. In the afternoon, a gang of settler-colonists from ‘Havat Maon’ invaded Humra lands, and reached the water hole, but the army removed them. Furthermore, gangs of masked settler-colonists armed with clubs from ‘Havat Maon’ lay in ambush to activists on their way to Tawane, who wereblocked by the army on the false claim of closure orders. That day, activists documented settler-colonists of this outpost invading caves belonging to Tawane inhabitants at Harouba, and later found there the remains of food and campfires, and apparently in both caves expansion had been taking place.
On Wednesday, settler-colonists from the terrorist outpost ‘Havat Maon’ went on a walking ‘tour’ through isolated Palestinian communities in the area, and activists were summoned to spend the night at Simara for fear of harassment.
The army escort that is supposed to protect Touba children from the terrorist in the illegal outpost controlling their way to school at Yawane was late again this week – nearly an hour on both Sunday and Thursday. On Monday, the soldiers came on time but deserted the children half way, and came back only when a settler-colonist arrived and harassed the children.
At Palestinian Susya, new settler-colonist invasions were discovered this week, and on Monday, settler-colonists from the settler-colony of ‘Susya’ attacked Palestinian shepherds with stones.

Jerusalem
The Jerusalem police is wreaking havoc again at Damascus Gate. On Monday, Palestinians were violently removed from the area in front of the gate. On Wednesday a policeman was documented beating up a young Palestinian who approached him to complain of another policeman who had beaten him up. The policeman was filmed saying: “Want me to beat up your other leg?”, taking out a club and hitting the fellow who dared complain. That night, an 11-year-old boy was arrested there and thrown forcefully into the police van although he did not resist arrest. On Thursday Border Policemen were documented chasing away journalists and customers of a coffee house on Ha’Nevi’im Street, above the area in front of the gate.
The Supreme Court let the State Attorney present his take on the Baten Al Hawa, Silwan case until Wednesday, October 20. About 86 families are in danger of being evicted following settler-colonist claims of Jewish ownership there prior to 1948. On Monday, October 25, the court will be in session on the first appeal reaching it regarding the case.
On Friday, the weekly protest vigil took place in Sheikh Jarrah opposite the rightist thugs who came in full force and cursed the demonstrators – including MK Mossi Raz who joined the protest – with a megaphone.

Throughout the West Bank
Occupation soldiers brutally arrested a Palestinian activist and two Israelis harvesting olives on privately-owned Palestinian land of Kufr A-Dik (Salfit district) on Monday.
The soldiers, at the bidding of a settler-colonist from the nearby ‘illegal’ outpost of ‘Havat Nofei Avi’, ordered the harvesters away, and were filmed boxing the Palestinian activist’s face and stepping on his back after making him fall. The two Israeli activists were brought before a judge the next day and released with a distancing order, and then the Palestinian activist was released after a court session at ‘Ofer’ Camp.
The same day, Monday, settler-colonists attacked Palestinian olive harvesters at Deir Khatab (Salfit district), and dozens of settler-colonists stole the olive harvest of villagers of Khirbet Yanoun (Nablus district).
On Wednesday, settler-colonists sabotaged vehicles and sprayed racist slurs on walls of homes in Marda (Salfit district). The same day, Wednesday, a Palestinian who reported to the DCO the sabotaging of his crop and setting his fields on fire at Mughayer (Ramallah district) was attacked with a metal rod by terrorists from the outpost of ‘Adei Ad’ who chased him and the Civil Administration officer and a soldier, and even attacked them with teargas.
80 olive trees were cut down by settler-colonists at Douma village (Nablus district) on Friday night. The same day, at Yasouf (Salfit district), Palestinian olive harvesters were attacked with stones by about 40 Jewish terrorists from the outpost erected on their land, ‘Rechelim’. The terrorists pepper-sprayed a 50-year-old Palestinian woman, threw stones at vehicles, and stole the olive crop and personal items of the harvesters. Four of the Palestinians were wounded.
On Saturday, masked Jewish terrorists set fire to fields on Bourin village lands and threw stones, in full sight of Israeli soldiers present. Later a military reinforcement arrived and the attack stopped, but no settler-colonist was arrested, while sun grenades were thrown at Palestinians.

Demolitions throughout the West Bank
The occupation authorities demolished 12 structures at Ras A Tin (Ramallah district on the West Bank Hill Range) on Thursday, one structure in Abu Nawar (east of Jerusalem) and a structure in Hares village (Salfit district) on Tuesday

This entry was posted on Sunday, October 17th, 2021 at 19:20 and is filed under Activities, English. You can follow any responses to this entry through the RSS 2.0 feed. Both comments and pings are currently closed.