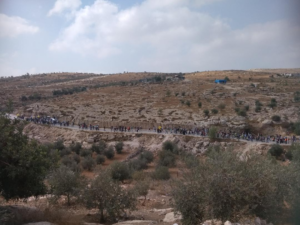 Dozens of terrorist settlers from ‘Avigail’ and ‘Havat Maon’ celebrated Simhat Torah by holding a pogrom in Mufaqara – 12 Palestinians wounded, a 3-year-old hospitalized with a head wound, goats and sheep slaughtered by stabbings, destruction and harsh violence in all the village homes and vehicles, and 2 settler- minors in custody – the rest not located or released – the officer who was ‘scolded’ a week ago focused on chasing Palestinians throughout the event; hundreds of Palestinian and Jewish activists took part on Saturday in a solidarity march to Mufaqara; the army force in charge of accompanying the Tuba children to school sabotaged its mission this week with threats, closed military zone orders and activist arrests; the occupation forces destroyed roads leading to the site of Beita villagers’ weekly protest against theft of their land; 416 nationalist hate crimes commited by Jewish Israelis against Palestinians in the Occupied Territories were recorded in the first half of 2021– more than the total number of such crimes (363) in all of 2019

South Hebron Hills
Dozens of terrorist settlers from ‘Havat Maon’ and ‘Avigail’ outposts celebrated the religious holiday of Simhat Torah with a pogrom in the Palestinian village of Mufaqara. On Tuesday morning, September 28, a settlers’ vehicle with a loudspeaker sped through the village, announcing “Holiday for Israel, bad day for Ishmael”.
At 10 a.m. the planned festivities began, as dozens of masked settlers broke out of ‘Avigail’ waving clubs, and with the help of a tractor chased the goat flock of a Palestinian shepherd towards their outpost. Army vehicles joined them immediately, while the thugs managed to slaughter 4 goats, two with many stabs in the belly, the other two by slitting their throats. The soldiers prevented the shepherd and his brother from gathering their flock again, hurled stun grenades at them, thenshackled and arrested them (one of the shepherds was released an hour later, the other only at 1 o’clock AM, after paying a 400 shekel fine). At the same time, the thugs broke into a pen in the other end of the village, and soldiers helped them with gunfire which made the villagers run to hide in the wadi, thus enabling the pogromists to run wild throughout Mufaqara. Dozens of masked settlers, armed with stones and rocks, clubs, knives and guns, rampaged the village. 12 villagers were wounded. A terrorist settler smashed the head of a 3-year-old boy with a stone, the boy was hospitalized with cracks in his skull and internal bleeding. In addition, the settlers killed 4 sheep, and another 4 goats were found stabbed in the nearby village of Rakeez. 12 vehicles were damaged, all their windowpanes smashed and their tires punctured, 2 tractors damaged, and one truck destroyed. The settlers turned over a car, punctured a water tank, and smashed 4 solar energy systems. In Mufaqara’s houses, not one window was left whole. From there, the pogromists proceeded to Rakeez and the outskirts of Tawane, escorted by soldiers who helped them by firing bullets, teargas and stun grenades. The Deputy regiment commander who was ‘reprimanded’ a week earlier, Maor Moshe, excelled again, and was filmed chasing Palestinians, arresting one of them and hurling another to the ground. Two Palestinians were arrested, one released on the spot, the other upon depositing 500 shekels. Among the dozens of Jewish pogromists, 4 were arrested and already released; 2 minors remained in custody, and an adult suspected of attacking a soldier was released to house arrest.
The next day, Wednesday, police vehicles arrived in one of the nearby outposts, apparently in an attempt to arrest suspects, and found it empty. A quarter of an hour after the policemen were gone, the terrorist settlers returned. On Thursday, large army forces were in the area, and Mufaqara was visited by journalists, diplomats and army personnel. On Friday, a tour of “Breaking the Silence” and “The Mothers” organization, as well as MK Gaby Lasky, tried to reach ‘Mitzpe Yair’ outpost, escorted by soldiers. The settlers threatened the army officer with violence if he let the tour enter their community. The local brigade commander immediately issued a closed military zone order, and the tour was forced to leave the area. On Saturday, hundreds of Jewish and Palestinian activists held a march from Tawane to Mufaqara, among them figures from the Palestinian political and religious establishment, and 2 MKS from Israel. The marchers brought with them a water tanker. Many army forces were present but did not interfere.
On Sunday, Monday and Tuesday, before the pogrom in Tawane, the very same military force in charge of accompanying the Tuba children to school, as protection from the ‘Havat Maon’ terrorist settlers, harassed the children and the activists accompanying them. On Sunday the force was late, and refused to let two women – one elderly and the other pregnant – join the group on its way back. The officer detained the accompaniers and issued a closure order. The next day, they threatened one of the children and again prevented activist accompaniment with a closure order. On Tuesday, as the pogrom took place nearby, the officer in charge prevented activists from joining the children by showing a far-reaching closed military zone order, then arrested 4 activists, who were taken to the Hebron police station.
On Monday, settlers from an outpost near ‘Avigal’ were documented invading a Palestinian olive grove nearby, along with their flocks. On Tuesday, ‘Havat Talya’ outpost terrorists attacked Palestinian shepherds, wounding one of them, who was hospitalized. The officer arriving on the spot hugged the outpost terrorist and declared a closed military zone to prevent Palestinian grazing.
On Saturday, while activists accompanied the family of the Palestinian landowner to Umm Al Arais, terrorist settlers came out of the outpost ‘Mitzpe Yair’ and held provocative patrols in the nearby villages of Simra and Qawawis.

The Palestinian Jordan Valley
Activists accompanied Palestinian shepherds most days this week in Auja, Hamra, Khalat Makhoul as well as En Sukut and Samara, mostly unhampered. In Samara on Monday, two terrorist settlers from the outpost near Umm Zuka attacked a flock with stones, wounded sheeps and hit the belly of a pregnant sheep, which later aborted; activists summoned the Israeli police and army, but these did not arrive. The next day, settlers harassed the community at midnight with projectors, and on Friday a terrorist settler accelerated his vehicle into a flock. Activists also documented an electrified fence erected along a large area adjacent to the outpost at Umm Zuka. In Hamra, the army tried to prevent Palestinian grazing on Tuesday with a closed military zone order, issued at the bidding of the violent settler from the nearby outpost. The next day, he himself tried to chase away the flocks with a drone.
On Sunday, the Israeli army prevented the Humsa community, destroyed and evicted weeks ago, from continuing to rescue the hay that was left at the site of destruction. On Tuesday, activists brought nylon sheets for Humsa families left without shelter.

Jerusalem
The Friday protest vigil at Sheikh Jarrah went unhampered by the police this week.
The occupation authorities demolished a structure in the Sur Bahr neighborhood on Thursday.

Throughout the West Bank
The occupation forces invaded the Palestinian village of Luban A-Sharquiah (Nablus district) on Thursday, September 30, hurling stun grenades at schoolchildren and preventing them from reaching their school in the village.
Early on Friday morning, Israeli army forces escorted bulldozers that destroyed roads leading to Jabal Sabih in the village of Beita (Nablus district), where weekly demonstrations are held for the past few months, protesting the theft of village lands by the illegal ‘Evyatar’ settler outpost. The Beita protesters have suffered numerous casualties, including direct killing by live fire in violent attacks by the occupation soldiers. Still, the Beita demonstration was held this Friday, as well as the weekly demonstration in Beit Dajan (Salfit district).

**
An item published this week in Haaretz reported the doubling of nationalist hate crimes perpetrated by Jews against Palestinians in the West Bank since 2019. In the first half of 2021 alone, 461 such crimes were committed by Jews against Palestinians, more than all of the crimes committed in 2019 – 363. ‘Sources in the security system believe that the policy implemented by the Israeli army and police since then has led to the rise. According to the same sources, since the death of Horgan and Sandak, the political and military echelons try to avoid confrontations with the settler-colonists, and enable the extremists to do whatever they please throughout the West Bank.”

This entry was posted on Sunday, October 3rd, 2021 at 19:41 and is filed under Activities, English. You can follow any responses to this entry through the RSS 2.0 feed. Both comments and pings are currently closed.