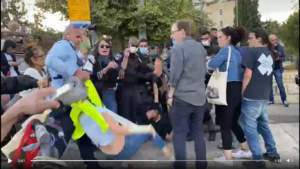 Israeli soldiers shot to death Mohammad Ali Habisa from Beita village, a 28-year-old father to a baby girl 8-month-old, during the weekly demonstration against settler landgrab; In the South Hebron Hills, ADF forces came to confiscate a Palestinian bulldozer at work on a farm, while allowing settlers to operate a bulldozer unhampered, constructing an illegal outpost nearby; Settlers accompanied by Israeli army forces invaded Susya while European diplomats were visiting the village – the soldiers violently attacked the Palestinian villagers, one of whom was wounded; Setlers from ‘Omer Ranch’ riding a mini-tractor invaded a Palestinian community of Auja at night, attacked a Palestinian and wounded him; Once again, Jerusalem police went wild during the weekly Sheikh Jarrah protest vigil: they grabbed Palestine flags, attacked, wounded and arrested four demonstrators – allof them released by the court, ruling that it is not illegal to raise Palestine flags.

South Hebron Hills
On Tuesday, September 21, an Israeli army force came to Umm Lasfa, between Tawane and Dirat, to confiscate a bulldozer the Palestinian villagers were using to open a farm track – claiming this was illegal work done inside Area C. The soldiers threatened activists who stood by the villagers and tried to distance them, but after two hours they gave up and left. The next day, Wednesday, settlers had a bulldozer carry out construction work on Palestinian lands in Atariya, along with a cement mixer used for foundations for a new structure. The army did not try to prevent these blatantly illegal works, nor confiscate equipment. The same day, it did confiscate a generator from Palestinians in nearby Abu Qabita.
On Friday, September 24, local activists from Susya together with ‘Combatants for Peace’ held a tour for diplomats from 19 states, focusing on denial of access to water to the region’s Palstinian inhabitants. As they were touring Susia, dozens of settlers, escorted by Israeli army forces, invaded the village, but instead of making the settlers leave, the soldiers violently chased away the Palestinians villagers with stun grenades. At least one Palestinian was wounded and needed medical attention.
Activists accompanied Palestinian shepherds and farmers on Saturday in Umm al Amad, Umm Al Arais, and Atariya, without special incident. In the evening, settlers and their flocks from the new outpost/ranch near Avigail invaded tended Palestinian fields. The Israeli army was summoned, but the settlers left only at nightfall.

Palestinian Jordan Valley and Mountain Range
Most days of the week, activists accompanied Palestinian shepherds in the southern and northern Valley, in the communities of Auja, Hamra, and Makhoul.
In Auja, on Monday, the owner of ‘Omer Ranch’ illegal outpost observed a Palestinian herd grazing; minutes later, an Israeli army officer and her soldiers arrived on the spot to restrict the Palestinian shepherds, at the settler’s bidding. During the night between Wednesday and Thursday, three settlers riding a mini-tractor drove into a Palestinian community near ‘Omer Ranch’, and attacked a Palestinian villager, wounding him. The next day activists stayed on site, as they did on Friday, when a settler tried to chase away the Palestinians’ flocks from their grazing ground with the false claim that the area belongs to ‘Omer’. On Saturday, a mini-tractor from ‘Omer Ranch’ again sped towards girl-shepherds and their flocks and chased them away.
In Hamra, on Wednesday, the violent settler from the nearby outpost blocked activists and shepherds on their way, first with a rope, then with a vehicle. The same day, a tour of the area was held for Palestinian activists. Also, activists protested against the blocking of En Al Hilwa spring to Palestinians. The protest took place successfully despite the presence of settlers, army and police.
At En Sukut, a settler chased away a Palestinian shepherd and his flock on Wednesday.
On the West Bank Hill Range, activists accompanied shepherds from Deir Jarayer and the Tayibe Junction on Sunday and Monday, and also helped Palestinian landowners to lodge complaints with the police against the violent incursions of their lands by settlers from the surrounding outposts, and their flocks.

Jerusalem
An especially violent rampage by the Jerusalem police broke out during the weekly protest vigil in Sheikh Jarrah last Friday. The force, commanded and led by officer Shachar Mahsomi, charged at the demonstrators, declared the protest over and dispersed, hurled elderly people and women to the ground, grabbed Palestine flags from people’s hands and arrested four demonstrators, one of whom was wounded in the head and hospitalized. The entire event took place at the initiative of the commander mahsomi, without any provocation on the part of the demonstrators. Three of the people arrested were released the same day. In a court session on Saturday night, the fourth detainee was released without restrictions, and the judge ruled that waving a Palestine flag was in no way illegal, and that the protest vigil was perfectly legal.

Throughout the West Bank
Unlike publications citing the Israeli Chief of Staff calling upon commanders to ‘decrease cases of shooting at Palestinians in the West Bank’, the IDF persists in its policy of executing Palestinian demonstrators. Last Friday, an Israeli soldier shot dead Mohammad Ali Habisa, 28-year-old father of an 8-month-old baby girl from Beita village, during the weekly demonstration protesting the landgrab of Beita land by the criminal outpost ‘Evyatar’.
*
In Tel Aviv, activists demonstrated on Friday in protest of the Israeli Occupation.

This entry was posted on Sunday, September 26th, 2021 at 19:34 and is filed under Activities, Activity Spotlight, English. You can follow any responses to this entry through the RSS 2.0 feed. Both comments and pings are currently closed.