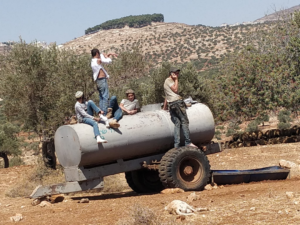 Hamra, Palestinian Jordan Valley, Tuesday: Israeli soldiers forced a shepherd boy to the ground and shackled his feet and hands, when out of sheer fear he nearly swallowed his tongue, fainted, and only regained consciousness two hours later – the woman officer stepped on the back of the other shepherd boy, a 12-year-old – then the soldiers removed the shackles and left, and the comatose boy was rushed off to hospital; Invasions of settler flocks continue in Palestinian-tended fields and vineyards in the South Hebron Hills, in the Palestinian Jordan Valley and in the West Bank Hill Range, mostly with active assistance of the Israeli army; Soldiers shot Imad Hashash from Balata refugee camp, a 15-years-old, in the head and killed him,; The battalion deputy commander responsible for escorting Touba village children to their school, to protect them from the terrorist outpost of Havat Maon, prevented villagers and activists from waiting for the children at the usual meeting point most days this week; A Palestinian activist was kidnapped by an Israeli army force at Saroura and thrown out around the Meitar checkpoint; Activists put up a protest tent in Tel Aviv’s Sarona complex – ‘Looking the Occupation in the Eye’; Hundreds demonstrated ooutside the Megiddo jail in protest of the prison wardens violence towards Palestinian prisoners

South Hebron Hills
This week, Israeli army and police personnel helped the settlers of terrorist outposts ‘Havat Maon’ and ‘Mizpe Yair’ to invade Palestinian-tended lands with their flocks – most of the areas are out of bounds for Israelis by regional commander orders – in Humra and Harouba near the Palestinian villages of Tawane and Umm Al Arais.
Settlers and their flocks invaded fields at Humra on Sunday and again on Monday, when activists summoned the police – but the policemen stated they ‘couldn’t find the place’. Invasions to Humra were repeated on Wednesday and Saturday, courtesy of the Israeli army present at the site. In Harouba as well, on Friday, settlers invaded tended fields closed to Israelis by regional commander orders, but confronted Palestinian villagers protesting. Consequently, later that evening, the occupation forces arrived at nearby Saroura, shackled a Palestinianh youngster and kidnapped him in an army vehicle. He was then thrown out around Meitar Checkpoint without knowing where he was, and finally was picked up by his family.
On Saturday, settlers held a massive incursion into the fields of the Palestinian landowner in Umm Al Arais, courtesy of the Israeli army forces. The settlers, some of them masked and armed with clubs, scattered a flock over the tended field. Finally the commander in charge issued a closed military zone order and chased away from the field both settlers and Israeli activists, but enabled the Palestinian landowner and his family members to stay.
After neglecting their duty and coming late to escort the Touba children on their way to school in Tawane this Sunday, the occupation soldiers arrived on the next day in a long convoy – along with two of the terrorist settlers from whom the soldiers are supposed to protect the children, by decree of the Knesset committee. The deputy commander of the local battalion ordered Israeli activists and Tawane villagers waiting for the children at their regular meeting spot to get back into the village and threatened them, apparently at the bidding of the settlers, of canceling the escort and declaring the area a closed military zone. The next day, Tuesday, he repeated the threat and added threats of arrests. On Wednesday, the soldiers turned about and welcomed the villagers and activists, but then on Thursday the commander acted on his threats and declared the area a closed military zone, preventing the activists and villagers from waiting for the children at their usual spot, so they were forced to make the last stretch of the way on their own.
On Friday, August 27, the occupation forces – with many soldiers and a closed military zone order – prevented Palestinian inhabitants from holding their weekly prayer and protest against the expansion of the ‘Avigail’ outposts on their lands. A villager from Umm Al Kheir and five journalists were arrested. The villager was released on the spot and the journalists were taken to the Kiryat Arba police station, where they were released with a summons for questioning.
On Tuesday, August 24, soldiers doing the settlers’ bidding once again prevented Palestinian surveyors and landowners from doing their work, this time around Tha’ale.
On Saturday, activists documented a new structure erected by settlers on privately-owned Palestinian lands in Jabal Johar (south of Hebron) , below the outpost ‘Givat Gal’.

Demolitions in the South Hebron Hills
On Tuesday, August 24, the occupation forces demolished and confiscated 4 sheep pens in Rahawa. On Wednesday they destroyed a garage at the entrance to Hebron. In Khalat Al Far’oun they destroyed a terrace, cut down a vineyard just before harvest time, destroyed fruit trees and fences. In Za’atut they destroyed the beginning of construction of a mosque.

Palestinian Jordan Valley and the West Bank Hill Range
Activists accompanied Palestinian shepherds all days of the week around Hamra, where severe harassment by settler-colonists was documented, actively aided by Israeli soldiers. On Sunday, a settler threw stones at a Palestinian flock, and on Tuesday soldiers prevented Palestinian grazing and issued a closed military zone west of Hamra, while a settler on horseback rode into the flocks on the east side of Hamra. In the evening, a boy and a youth with their flock were chased away by soldiers who threw stones at them. The soldiers pushed the youth to the ground, shackled his feet and tried to do so to his hands, when, from sheer fright, he nearly swallowed his tongue, lost consciousness and regained it only two hours later; the woman-officer stepped on the 12-year-old boy’s back. At this point, the soldiers untied the shackles and left, and the unconscious youth was rushed off to hospital. The next day, Wednesday, again activists documented the Israeli army forces joining the same violent settler from the outpost/ranch near Hamra, kicking and chasing away the flock after presenting a documented they called “restricted entry”. The same day, activists managed to prevent the chasing away of a flock east of Hamra by the violent settler on horseback, but in the afternoon, he rode into a flock west of Hamra and chased it away. He continued harassing the flocks with a drone on Thursday, Friday, and Saturday without the army’s intervention.
Construction and expansion of the outpost near ‘Hamra’ settler-colony were also documented.
All week, incursions of settlers’ flocks continued into Palestinian-tended fields In Tayibe junction and Deir Jarayer on the West Bank Hill Range; activists documented the damages to trees and fields. On Monday, settler flocks with their shepherds, a tractor and a water tanker invaded Palestinian olive tree groves and tended and fenced fields. Activists summoned the police who then identified one of the settlers on the Deir Jarayer lands. Later in Tayibe a settler attacked one of the activists and was detained by police. The next day, Tuesday, invasions by flocks and water tanker continued, helped by soldiers who tried to chase away the activists; Police was summoned and did not arrive. On Thursday as well, an incursion of a settlers’ flock was recorded on the Deir Jarayer fields.
In Auja, in the southern part of the Palestinian Jordan Valley, activists joined Palestinian shepherds most days this week, usually unhampered, except for Tuesday, when the occupation forces detained a Palestinian shepherd and an activist on the false claim that they were grazing on a settler’s “private property”. They were released on the spot.

Jerusalem
The weekly demonstration, protesting the eviction of Palestinians in the Sheikh Jarrah neighborhood in favor of settler associations, took place on Friday while ‘recorders’ on behalf of the latter harassed the demonstrators. A settler woman drove her car into the demonstrating crowd time and again, right in front of the policemen who were blocking entry into the neighborhood of Palestinians and activists.

Demolitions in Jerusalem
In Walaje, the occupation forces demolished 2 dwelling buildings on Wednesday, August 25, and 14 people residing there were left homeless. The next day, another dwelling was demolished in the Beit Hanina neighborhood.

Inside Israel and throughout the Occupied Territories
On Sunday, August 22, hundreds of demonstrators, MKs among them, protested against violence that was exerted by prison wardens upon Palestinian prisoners at Megiddo Prison the previous week.
On Monday, August 23, the occupation army closed off two roads leading to Sinjil (Ramallah district) claiming stones were thrown – forcing all Sinjil residents to walk a Marathon (42 kilometers) plud an hour’s drive by car to reach the next town, Turmus Aya, which lies right across the road from them.
On Tuesday, Israeli soldiers killed 15-year-old Imad Hashash from Balata refugee camp near Nablus, with a shot at his head.
Between Wednesday and Friday, activists sat at a protest and information tent they put up in Tel Aviv’s Sarona compound, showing videos of the goings-on in the Occupied Territories, under the heading: “Looking The Occupation In The Eye”.

Demolitions throughout the West Bank
In Sebastia (Nablus district) the occupation authorities demolished a structure on August 23, and another the next day in Deir Al Ghussun (Tul Karm district).

This entry was posted on Sunday, August 29th, 2021 at 19:00 and is filed under Activities, English. You can follow any responses to this entry through the RSS 2.0 feed. Both comments and pings are currently closed.