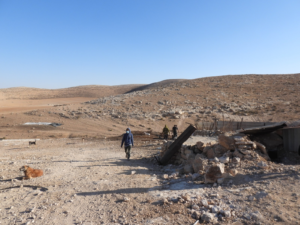 Dozens of caravans were delivered this week to expand the ‘illegal’ settler outposts in the South Hebron Hills; two activists – a Palestinian and an Israeli – were wounded by shots fired by the occupation forces at the prayer and protest assembly against the expansion of Avigail outposts; the Israeli army once more mobilized to help terrorists from Havat Maon and Avigail in chasing away Palestinian surveyors and landowners from their fields in the area; activist accompaniment of shepherds in the Palestinian Jordan Valley and the West Bank Hill Range persists against invasions and evictions; the Jerusalem police raided and dispersed with violence a party held in Issawiya for students celebrating their passing matriculation exams; Judeo-Nazis stabbed and wounded severely a Palestinian young man in the West Jerusalem market of Mahane Yehudah;

South Hebron Hills
This week, massive expansion of settler outposts was documented in the area. On Sunday, August 15, the South Hebron Hills saw 30 caravans arrive, half of which were delivered to the ‘Sham’a’ colony area. In the early morning hours, 6 caravans were seen arriving from Meitar crossing, and in the afternoon, settlers placed a caravan near the ‘Avigail’ outpost.
Settlers, some of them masked and armed with clubs, invaded on Monday the Palestinian village of Tha’ale. Activists trying to reach the area by car were blocked by the settler-terrorists and continued on foot. The settlers threatened a woman-activist who remained in the car until she managed to get away.
On Wednesday, the security official of ‘Carmel’ settler-colony and soldiers doing his bidding returned to the outhouse that has been keeping them busy for years now in Umm Al Kheir, checked all around it, probably in order to confiscate it yet again. The next day, soldiers volenteered to help settlers chase Susya shepherds from a nearby ravine, but because of a Palestinian activist’s insistence they were forced to concede, distancing the settlers and allowing grazing to proceed unhampered.
This week, on Friday, the occupation forces once again violently dispersed a protest prayer of Palestinians of the area, (with about 30 Israelis attending) against the expansion of the new outpost near the old outpost of ‘Avigail’. The soldiers fired teargas and stun grenades, a Palestinian activist was wounded in the leg and an Israeli activist in the belly. Two activists, a Palestinian and an Israeli, were arrested but released on the ground.
The next day, soldiers once again used teargas and stun grenades near the outpost of ‘Avigail’, this time to chase away surveyors and Palestinian landowners working there. The army blocked activists trying to reach the area. In the evening a settler from ‘Mitzpe Yair’ led another flock to the ranch/outpost in construction near ‘Avigail’. The settler made sure to have his flock pass through Palestinian villages on the way and sow panic there.
Early in the morning on Saturday, in Humra near Tawane, a settler from the terrorist outpost ‘Havat Maon’ invaded Palestinian fields tended and closed by commander edict to Israelis, but activists managed to distance him from the spot. Later that day, Palestinian surveyors and landowners working there were attacked by a gang of settlers armed with clubs. Soldiers watching the incident came down to help the settlers, and chased the Palestinians from their own lands with stun grenades.
The army escort of Touba schoolchildren on their way to their school in Tawane, which was ruled by a Knesset committee in order to protect the children from the violence exerted by the terrorists of ‘Havat Maon’, was nearly an hour late on Saturday.

Palestinian Jordan Valley and West Bank Hill Range
Activists accompanied Palestinian shepherds nearly all days this week in Auja in the southern Palestinian Jordan Valley, as well as in Hamra and Makhoul in the north, usually unhampered. However, on Friday, August 20, soldiers chased away the Auja shepherds without any excuse or edict, claiming they were on ‘Omer’s private land’ – referring to the privileged settler expanding his hold on the area. Also, during the week a new agricultural invasion was documented in the Palestinian fields around Makhoul, where settlers planted saplings.
On Monday, August 16, soldiers and Civil Administration workers came to Atouf in the northern Palestinian Jordan Valley and thoroughly destroyed a dirt track that led from the village to its farmlands. The forces continued north to Bardala, where they cut down 100 olive trees.
On Wednesday, in En Sukut, a terrorist who according to eye-witnesses came from the settler-colony ‘Shadmot Mekhola’, drove his vehicle into a flock grazing on privately-owned Palestinian land, and killed a pregnant sheep. Activists accompanied shepherds in En Sukut and En Al Hilwa on Thursday and Friday as well. On Friday, while they were out with the herd, settlers and their soldier escorts came to the shepherd’s home in En Sukut and questioned his wife.
In Tayibe and Deir Jarayer on the West Bank Hill Range, invasions by settler flocks continue daily, especially from the outpost of ‘Maale Ahuviya’, into olive tree groves, water cisterns and Palestinian-tended fields. Activists accompanied shepherds on Sunday, Monday, Tuesday and Friday. On Friday, settlers tried to block the activists on their way to document an invasion of a vineyard that had already been destroyed several times, and threatened them. After documenting the destruction, the activists accompanied the owners who lodged a complaint with the police.

Jerusalem
The Jerusalem police invaded Issawiya neighborhood on Tuesday, August 17, in order to disperse a celebration held for high school students who had matriculated, and put a stop to the joyful event with severe violence.
On the night between Wednesday and Thursday, Judeo-Nazis attacked an Arab youngster, stabbed and seriously wounded him in Mahane Yehuda market in West Jerusalm.

Demolitions in Jerusalem
The occupation authorities demolished a dwelling in Silwan and a building in A-Tour on Sunday. On Tuesday destroyed a structure in Beit Safafa, and one in Jabel Mukabar.

Throughout the West Bank
The student movement of Bir Zeit University held a march on Tuesday at the entrance to Al Bireh, near the settler-colony of Bet El, protesting the execution of 4 Palestinians by the occupation forces in Jenin the previous day. Soldiers responded with a barrage of teargas and stun grenades.

This entry was posted on Sunday, August 22nd, 2021 at 18:57 and is filed under Activities, English. You can follow any responses to this entry through the RSS 2.0 feed. Both comments and pings are currently closed.