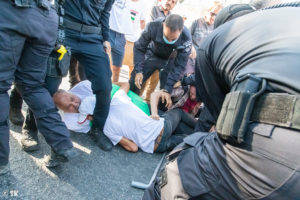 Israel continues to demolish Palestinian houses, farm structures and water cisterns in Area C, while ‘illegal’ construction and expansion of settler outposts and ranches are bluntly carried out on Palestinian land with support of the occupation forces, and settlers attack Palestinian shepherds, invade and damage Palestinians’ fields, property and homes throughout the Occupied Territories; More police brutality in Sheikh Jarrah and at Damascus Gate in Jerusalem

South Hebron Hills
On Wednesday, August 11, the occupation forces went on yet another rampage and demolished 4 structures at Khalat A-Dab’a, among them a new water cistern and dwellings, 3 structures at Fakhit – among them a large sheep pen that held 600 sheep. In an attempt to prevent documentation, the soldiers violently attacked and wounded a Palestinian who then needed surgery on his leg. From there they continued to the Bawa’ib area, demolishing 6 structures there, among them 2 water cisterns and a large structure of a farm under construction.
The same day, Wednesday, local Palestinians took international journalists on a tour of the area.
On Friday, Palestinian and Israeli activists held a protest demonstration and prayer against the expanding of ‘illegal’ outposts newly built around the old ‘illegal’ outpost of ‘Avigail’, but large army forces dispersed them by firing teargas and stun grenades and declaring a large closed military zone (including Avigail, Mufaqara, Maon, Tawane and part of road 317).
3 Palestinian and 2 Israelis were arrested and released without being taken to a police station for questioning. Later that day, an army force arrived at Tha’ala village at the bidding of a settler, questioned the villagers, and left.
Activists helped fence and clear stones from the land of Umm Al Kheir on Saturday, and accompanied the landowner in Umm Al Arais, where Israeli soldiers addressed them on loudspeakers from a drone. In the afternoon, 6 settlers invaded the Palestinian village of Mufaqara. The soldiers tried to prevent activists from approaching, declared another closed military zone and threatened with arrests. Then soldiers accompanied settlers who invaded a Palestinian water cistern in Humra lands near the village of Tawane.

Palestinian Jordan Valley and West Bank Hill Range
This week Israeli activists accompanied Palestinian shepherds around Hamra on Monday, Wednesday, Friday and Saturday. On Sunday, when no activists were present, the occupation soldiers chased a shepherd away from the area on the false claim of a closed military zone and detained him. On Thursday they came again, but this time let him graze there.
Shepherd accompaniment also took place in Makhoul on Sunday, and on Saturday activists documented settlers planting trees on Palestinian land there.
In Auja, activists accompanied shepherds on Friday, August 13, and reported a new fence being built and the planting of olive trees on Omer Atidiya’s outpost/ranch, that is steadily expanding without interference.
In Rashash activists recorded continued works on a road leading from ‘Malachei Hashalom’ outpost to ‘Tomer’ colony, as well as settlers’ trees planted in the area.
In Deir Jarayer, activists toured the area on Sunday in order to estimate damage done by the terrorists settlers from the outpost ‘Maale Ahuviya’ the previous week. On Wednesday activists accompanied shepherds in the area.

Jerusalem
Last Friday, during the weekly demonstration protesting the eviction of Palestinian Sheikh Jarrah inhabitants from their homes by settler associations, Israeli special police forces attacked the protestors violently again and again, throwing them down to the ground and beating them in order to grab Palestine flags they carried. Among other damages, they broke a woman-demonstrator’s arm.
The next day, Jerusalem police once again violently attacked Palestinians at Damascus Gate.

Throughout the West Bank
On Friday the occupation forces declared a closed military zone near Ras, west of Salfit, and prevented locals and Palestinian and Israeli activists from approaching the area of the new outpost erected on Palestinian land, at the end of the weekly march.
On Saturday, Israeli army forces attacked hundreds of Muslims in prayer who came to protest Israel’s threats to sequester the area of the Abraham Mosque in the Cave of the Fathers compound in Hebron. The same day, three Knesset (Israeli Parliament) Members of the Joint List party were visiting Hebron and confronted an Israeli infantryman (Golani Brigade) who tried to block them. The MPs lodged a complaint with the Knesset Chairperson.
Saturday night, a gang of Jewish terrorists attacked Palestinian homes in Hebron, wounded a woman and caused property damages.

This entry was posted on Sunday, August 15th, 2021 at 18:06 and is filed under Activities, Activity Spotlight, English. You can follow any responses to this entry through the RSS 2.0 feed. Both comments and pings are currently closed.