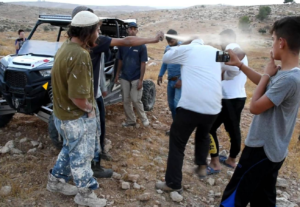 The weekly Palestinian victim of IDF’s wild shooting is a father of 5 from Beita, Imad Dwaikat, killed by soldiers during a demonstration against the robbery of his village’s lands; At the height of the present heat wave, the state of Israel demolished 38 structures in two days throughout the occupied West Bank – leaving 75 persons, 47 of them minors, without a roof over their heads and no shade; The Israeli army collaborates with settlers from ‘Avigail’, an illegal outpost, in chasing away Palestinian landowners and surveyors from their own fields; A compromise suggested by the Israeli Supreme Court to the Palestinian residents of Sheikh Jarrah in East Jerusalem requires them to recognize the ownership of their houses by a settler association

South Hebron Hills
Recent weeks have seen a combined operation of the settler-colonists of illegal outpost Avigail with forces of the Israeli army and police in order to dispossess Palestinians who own land nearby. On Saterday, August 7, when surveyors came to lands north of the outpost (where they were recently attacked and had expensive equipment stolen from them), army, police and settler-colonists were already waiting for them. The deputy regiment commander – in charge of the force – prevented surveyors and the landowners from entering their fields, declared a huge closed military zone (that included all the settler-colonies, outposts and Palestinian villages in the area and even road 317) and chased away the Palestinians, not before he erased with his boot the last marks left by the surveyors.
Large army forces and heavy equipment arrived at the Palestinian community of Sa’ir on Thursday and demolished 4 structures, of these two large dwelling buildings 3-stories high. The Palestinians’ protest was violently dispersed with stun grenades, and two Palestinians were arrested.
The same day, Thursday, activists accompanied a Palestinian shepherd to graze on privately owned land out of bounds for Israelis by the regional commanding general near Susya, when settlers and their flock accompanied by a drone came down towards them. A SUV vehicle and a gang of settler-colonists invaded the place later and threw stones at the Palestinians and the activists. A settler pepper-sprayed two Palestinians and one of them needed medical attention. Forces that arrived there apparently detained 3 settler-colonists.
On Saturday, activists accompanied the landowner at Umm Al Arais as well as farm work at Umm Al Kheir, that was disrupted by settlers and soldiers but not prevented.

Palestinian Jordan Valley and West Bank Hill Range
Activists accompanied Palestinian shepherds this week on Sunday-Tuesday at Auja In the southern part of the valley, as well as in Hamra in the north, where the struggle continues with the violent settler’s drone from the nearby outpost. On Sunday it was reported that settlers’ tractors invaded Palestinian lands at En Hadidiya. On Tuesday, activists accompanied shepherds near Makhoul in the northern part of the valley, and in En Al Hilwa, where they documented the settlers’ illegaly built fence that blocks Palestinian shepherds and their flocks from access to the water source.
All through this week, continuous harassment by terrorist gangs from the outposts around the colonies ‘Rimonim’ and ‘Kochav Hashachar’, was reported by the Palestinian communities of Deir Jarayer, on the West Bank Hill Range.

Jerusalem
In a session held on Monday, August 2, regarding the appeal of families threatened with eviction from their homes in Sheikh Jarrah for the benefit of a settler association, the Supreme Court Justices floated a compromise, proposing that Palestinian inhabitants would be recognized as protected tenants of the first generation and pay a secure rent to the settler association; however, by so doing, they will acknowledge the settlers’ ownership of their houses. The judges instructed the Palestinian families to present a list of protected tenants within 7 days.
The weekly protest in Sheikh Jarrah takes place every Friday. We will meet at the Sheikh Jarrah Garden, Nablus Road and Dahlmann St. at 4 p.m
Large army and police forces broke into an engagement party in Issawiya on Friday, August 6, kidnapped the bridegroom and took him into custody.

Throughout the West Bank
The Israeli army’s killing spree around the ‘evacuated’ outpost of Evyatar took its weekly toll on Friday, August 6: 38-year-old Imad Dwaikat of Beita village, father of five. During the weekly protest demonstration of villagers against their dispossession, 59 Palestinians were wounded, according to the Red Crescent one was shot in the leg, 20 were hurt by rubber-coated steel bullets, and the rest were beaten or inhaled teargas. Some were hospitalized in Nablus.
The same day, Friday, the occupation army declared the area of Ras (Salfit district) a closed military zone and violently assailed Palestinian demonstrators protesting the robbery of their lands as they do every week.
On Saturday, a settler attacked a Palestinian human-rights activist in Hebron, hit him in the face and hurled a stone at him. The assailant was distanced by a soldier, but no punitive measures were taken against him.

Demolitions
At the height of the present heat wave, Israel carried out an extensive demolition operation throughout the West Bank – 38 structures were destroyed within two days, among them 11 dwellings, 13 shops and 14 farm structures, leaving 75 persons – 47 of them minors – without roof nor shade.
On Wednesday, August 4, the occupation forces demolishjed 17 structures in Ibzik in the northern part of the Palestinian Jordan Valley, of them 4 dwellings. They also demolished a structure in Humsa Farsha (same area), a structure in Sebastia (Nablus district), 3 structures at Hizma (east of Jerusalem), 2 structures in Rihl Wadi (Bethlehem district), and another in Khirbet A Naha (Bethlehem district).
On Thursday, August 5, 4 structures were demolished, 2 of them dwellings, in Al Kaabana Mu’arjat in the southern part of the Palestinian Jordan Valley, near Auja.
In the South Hebron Hills on Thursday, 4 structures were demolished, 2 of them dwellings, in Sa’ir, and a dwelling tent in Ghanoub.

This entry was posted on Sunday, August 8th, 2021 at 17:19 and is filed under Activities, English. You can follow any responses to this entry through the RSS 2.0 feed. Both comments and pings are currently closed.