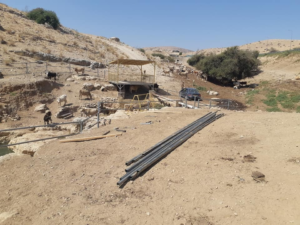 Total of the Israeli army’s weekly target practice: soldiers shot to death 12-year old Mohammad Al Alami of Beit Ommar who was sitting innocently in his dad’s car, 20-year old Shawaqat Awad who participated in the former victim’s funeral the next day, and plumber Shadi Lutfi Salim of Beita village who was holding ‘an object identified as a metal rod’ – a pipe wrench he was using for his job; settlers in the Palestinian Jordan Valley fence and block with concrete the Al Hilwa spring in order to prevent Palestinian shepherds from watering their flocks there – the army in full force blocked an attempt of locals and activists from reaching the spring to protest the illegal construction there; Havat Maon settler-terrorists continue their violent incursions into Tawane village and its lands, as the occupation forces look on.

South Hebron Hills
Villagers of Tawane had to confront terrorists from the settler’s outpost ‘Havat Maon’ all week. On Monday through Saturday gangs of settlers and their flocks invaded tended fields that are declared out of bounds for Israelis by military order in Humra, vandalized crops and olive trees, stole water from cisterns and stoned a shepherd as well as village houses. The occupation forces mostly arrived late on the spot and did nothing to prevent damages. On Friday, July 30, the invaders returned to the same fields three times through the day with no reaction from the ‘security forces’.
At Simiya on Sunday the occupation authorities confiscated electricity cables that were intended to connect to the regional electricity network, and on Wednesday cease-work edicts were issued for a cistern and a tin structure at Khalat A-Dhaba. At the same time, construction works for a new outpost at ‘Mitzpe Ziv’ near Birin went on all week, under tight guard of Israeli soldiers.
On Friday, activists held a work day at Sroura. In addition, a tour was held for educators from Israel to acquaint them with the reality of occupation and dispossession in the South Hebron Hills. Around noon Palestinians held a protest and prayer rally against the new outpost being built on their lands near ‘Avigail’ outpost. The army issued an extended ‘closed military zone’ and prevented them from coming near the site.
On Saturday activists accompanied the Palestinian landowner to his fields in Umm Al Arais where trenches and land theft were discovered. They also accompanied surveyors around Saroura near ‘Avigail’, and work there was done unhampered.

Palestinian Jordan Valley and the West Bank Hill Range
All through this week, activists documented settlers fencing and building around En Al Hilwa in order to block Palestinian access to the spring where they water their flocks. On Wednesday night (July 28) the occupation forces confiscated a tractor, used by the nearby Umm Jamal community for towing a water tank. They left the villagers without water and issued cease-work orders for structures there. On Saturday, dozens of Palestinian and Israeli activists tried to hold a protest vigil against the illegal fencing of the spring by settlers, but large army forces prevented them from approaching the site, fired stun grenades, and pepper-sprayed an Al Jazeera reporter.
Shepherd accompaniment was held this week on Monday and Wednesday around Auja, unhampered.
Near Hamra, activists accompanied shepherds several times this week, and witnessed the violent settler-colonist from the nearby outpost systematically operate a drone in order to scare and chase away Palestinians’ flocks. An army officer on site promised to stop drone flights, but Friday the drone was again launched to threaten the flocks.
In the northern part of the Palestinian Jordan Valley, a tour was held on Sunday for “Women Waging Peace”, and the same day activists accompanied shepherds from Deir Jarayer on the Hill Range who had been harassed by settler-colonist gangs and flocks.

Jerusalem
On Thursday, a tour of Silwan was held for about 60 international participants to acquaint them with the reality of ethnic cleansing in the neighborhood.
In Sheikh Jarrah, the weekly protest vigil took place on Friday, during which policemen headed by Deputy Superintendent Ronen Hazut grabbed Palestine flags and attacked a Palestinian activist. However, the hundreds of activists did not give in and continued to wave flags all through the demo. The next day, as Palestinians began a small and quiet demonstration in the neighborhood, Hazut’s forces responded by spraying “Skunk” water, jostling and arresting 2 demonstrators.
The weekly protest in Sheikh Jarrah takes place every Friday. We will meet at the Sheikh Jarrah Garden, Nablus Road and Dahlmann St. at 4 p.m
The occupation forces in East Jerusalem demolished a structure in the Sheikh Sa’ed neighborhood on Sunday, 5 structures in A-Ram on Wednesday, and 4 in A-Tour on Wednesday and Friday.

Throughout the West Bank
The Israeli army continues killing Palestinians around the ‘illegal’ outpost that was supposedly evacuated, ‘Evyatar’. On Wednesday, July 28, soldiers killed Shadi Lutfi Selim, a plumber from Beita village, who was holding ‘an object identifried as a metal rod’ – that turned out to be a pipe wrench he carried doing his job.
That same day, Wednesday, 12-year old Mohammad Al Alami of Beit Ommar was killed by Israeli soldiers who targeted their fire at the car of his father, which ‘aroused their suspicion’. The next day, during the child’s funeral, the occupation soldiers killed 20-year old Shawakat Awad from the same village with shots to his belly and head, and wounded another 11 Palestinians who participated in a protest around the funeral at Beit Ommar.
The occupation forces demolished a structure at A-Til on Sunday, and another structure at Luban on Tuesday – both in the Nablus district.

This entry was posted on Sunday, August 1st, 2021 at 17:08 and is filed under Activities, English. You can follow any responses to this entry through the RSS 2.0 feed. Both comments and pings are currently closed.