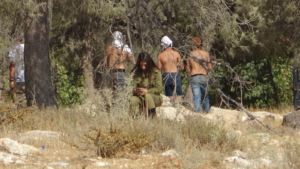 Israeli soldiers shot to death 17 years-old Mohammad Tamimi in the Palestinian village of Nabi Salah, performing a ‘suspect arrest procedure’; Settlers invaded a deserted army base in the northern part of the Palestinian Jordan Valley setting up a new outpost – the army turned a blind eye and brutally dispersed Palestinian protestors, one of whom was wounded by a live bullet in the back; IDF soldiers supplied abundant support all week to a violent settler near Hamra in the Palestinian Jordan Valley, chasing away Palestinian shepherds and their flocks from their nearby grazing grounds, and arresting one of them; More Palestinians wounded in the protest demonstrations in the villages of Beita, Usrin and Qaddoum against the theft of their lands; Attacks and incursions by settlers around Tawane in the South Hebron Hills; UN reports unprecedented demolitions in the Occupied Palestinian Territories, including East Jerusalem, during the past month of June;

Palestinian Jordan Valley and West Bank Hill Range
This week the army offered special support to a settler-colonist who has been terrorizing Palestinian communities around the illegal outpost he erected near the settler-colony Hamra. On Sunday, he sent a drone to haunt a flock, and soldiers to other flocks. The soldiers issued a ‘closed military zone’ order and chased away the shepherds and their accompaniers from the site. On Monday shepherds and their accompaniers were chased away from En Shibli by a ‘closed military zone’ order. On Tuesday activists managed to prevent the chasing away of a flock, but the next day the occupation army showed up early in the morning to the grazing ground and arrested one of the shepherds even before declaring a ‘closed military zone’, which was not even enforced after this arrest. The shepherd was shackled, blindfolded, and held for hours by the army before being taken to the police station where he was released on bail the next day. On Thursday, Israeli soldiers took upon themselves the settler-colonist’s ‘assignment’, drove their vehicle into Palestinian flocks in an area that is officially allowed for Palestinian grazing, and chased them away, laughing and having the time of their lives. On Friday the shepherds were already afraid to cross the area where the Hamra terrorist has been taking over, but ended up grazing with the help of activists.
Shepherds were accompanied on Monday in Auja unhampered.
On Friday, July 23, settler-colonists invaded a deserted army post in the northern part of the Palestinian Jordan Valley, around En Al Hilwa, to found another outpost after they succeeded with ‘Evyatar’. The occupation forces violently dispersed a Palestinian protest demonstration at the site and left one Palestinian wounded in his back from live fire, and others wounded by teargas and rubber-coated bullets. The settler-colonists were ‘allowed’ to stay there overnight, supposedly because of damage done to their cars, and promised to leave Saturday night. As expected, the settler-colonists remained there and were reported at the site on the morrow.
Most days of the week, activists accompanied shepherds to their grazing grounds around Tayibe Junction and Deir Jarayer on the West Bank Hill Range, and tried to prevent invasions of flocks from the ‘Maale Ahuviya’ outpost into tended Palestinian fields. The violent outpost of the hill thugs has been aiming for daily friction with the Palestinian farmer and shepherd communities in the region.
On Saturday, a tour of activists was held in the northern Palestinian Jordan Valley.

The South Hebron Hills
Flocks belonging to settler-colonists invaded areas closed to Israelis on Monday around Tawane and Humra, and the army prevented Palestinian from approaching their land. The invasions continued on Thursday and Friday. On Thursday settler-colonists threw stones at shepherds and activists near Susya.
On Saturday, July 24, a settler-colonist stole expensive equipment belonging to Palestinian surveyors west of the outpost ‘Avigail’. Activists arriving at the site summoned the police and protested at the entrance of the outpost, but two army officers who entered the outpost claimed that a search was held in the home of the outpost’s security official and the equipment was not found there. They declared a ‘closed military zone’ and arrested three activists. Two were released on the spot, and the third was released in the evening at Etzyon station, with a distancing order.
On Saturday afternoon, a gang of masked settler-colonists with stones attacked a house on the outskirts of Tawane, and one of the villagers was wounded in the head from a stone. The occupation army arrived to help the terrorists, and fired teargas at the village. A baby needed medical care because of teargas intake.
A Palestinian activist from Tawane was released from a 2-months prison term, but his sons are still in jail.
In Birin village, the occupation forces confiscated a bulldozer on Sunday, July 18.

Jerusalem
On Sunday, July 18, the Jerusalem police – with severe violence – dispersed Palestinians from the area of the Damascus Gate in order to enable about a thousand Jews to get to the Temple Mount. The forces also chased away Palestinians who came to pray from the site itself and were recorded attacking Palestinian women praying. The next night, the occupation forces again fired teargas and stun grenades at Damascus Gate to ‘disperse an illegal assembly’ of Palestinians there on the eve of their holiday, Eid Al Adha.
Next week, on August 2, the Israeli Supreme Court will hold a session about evicting Palestinian families from their homes at Sheikh Jarrah in favor of settler-colonist associations who have invaded the neighborhood and are trying to ethnically cleanse it. The inhabitants of the neighborhood are calling out to all those supporting their struggle to join them next Friday, July 30, for the weekly protest vigil.

Throughout the West Bank
3 Jews are suspected of igniting a Palestinian plant in the village of Jama’in on the night of Thursday, July 22.
On Friday, Israeli soldiers shot to death the boy Mohammad Munir Tamimi, 17-years-old, from the village of Nabi Salah, claiming this was within the procedure called ‘suspect arrest’, after a protest demonstration of the villagers against the theft of their land. The same day, Friday, 9 Palestinians were wounded by live fire at protest demonstrations by villagers of Beita and Usrin against the takeover of their lands by the Evyatar outpost.
Dozens of Palestinians were injured Friday by rubber-coated bullets and teargas canisters during the protest march against blocking the access road between Qaddoum village and Nablus in favor of the nearby settler-colony ‘Qedumim’.
During the weekly protest at Salfit on Friday once again an Israeli activist was arrested.

Demolitions
The June report by the UN monitoring organization counted 91 Palestinian structures demolished or confiscated during that month by the Israeli authorities throughout the West Bank and East Jerusalem, thereby leaving 108 persons, 62 of them children, homeless, and impacting the livelihood and accessibility of 2,700 others. The number of demolitions increased by 600 percent from May, and is the highest this year since the month of February.

This entry was posted on Sunday, July 25th, 2021 at 17:14 and is filed under Activities, English. You can follow any responses to this entry through the RSS 2.0 feed. Both comments and pings are currently closed.