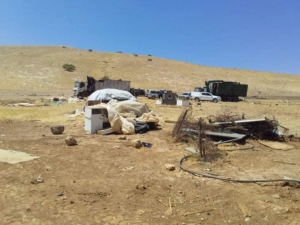 For the third time in a year, the occupation forces demolished Humsa village in the Palestinian Jordan Valley, confiscating from the villagers all their meagre possessions including food, water and milk for the children, leaving 70 people (36 of them children) in searing heat without any shelter and water; another week of constant harassment by the settlers – and the Israeli army who does their bidding – of the Palestinian communities in the South Hebron Hills; house demolitions in Jerusalem, and a night raid of armed forces on the Silwan neighborhood on Friday – 6 Palestinian residents were wounded; the Israeli army continues to defend the ‘evacuated’ outpost Evyatar, and on Friday wounded hundreds of Palestinians demonstrating in protest of the robbery of their lands in Beita village, of them 23 by live bullets;

photo: Remains of the Humsa community in the Palestinian Jordan Valley demolished by the State of Israel on Wednesday, July 7, 2021

Palestinian Jordan Valley and the West Bank Hill Range
On Wednesday, July 7, in the midst of a heavy heat wave (40 degrees centigrade), the Civil Administration demolished Humsa village in the Palestinian Jordan Valley for the third time this year. The soldiers demolished 38 dwellings and animal shelters as well as water tanks, confiscated packages of food and dismantled tents, leaving the community out in the open without any food or water. This time the Civil Administration soldiers took everything: the people’s personal effects including food, milk for children, clothes, hygienic products, diapers and toys. The animals too remained without feed and water. The army prevented humanitarian organizations, including the UN, from arriving at the site to help the families. 11 households numbering about 70 people, 36 of them children, are now uprooted again and subject to increased danger of forced eviction. Only the next day did MKs visit the site, and activists returned to the inhabitants some of the vital equipment that was thrown away by the Civil Administration in the village of En Shibli. On Friday activists continued to bring the villagers belongins back from En Shibli without intervention from the army.

Most days this week, activists accompanied shepherds at Auja and Hamra. In Hamra, on Wednesday and Thursday, the violent settler-colonist from the nearby outpost used a drone to harass the flock. The Israeli army tried to prevent grazing in Hamra on Thursday, without authority to do so, but had to give up. On Friday, July 9, settler-colonists stoned a cattle flock in En Al Hilwa. That day activists accompanied grazing in Samra, which went unhampered.

South Hebron Hills
Constant harassment by settler-colonists and the occupation forces continued this week:
On Sunday, July 4, two settler-colonists on horseback came to Wadi Sweid attempting to chase away Palestinian shepherds, and on Wednesday, in Humra near Tawane, a settler and his flock invaded Palestinian fields and an olive grove closed to Israelis by order of the local commander. On Saturday, July 9, the terrorist gangs of ‘Havat Maon’ ventured on their usual Saturday activity around Tawane and Humra, this time limited to invasion of groves and tended fields and attacks against shepherds, residents and activists. There were large forces present. MK Ofer Kasif accompanied the activists, and this time the forces chased away the colonist terrorists out of the closed zone by order of the regional commander.
On Monday, July 5, the security official of the colony ‘Carmel’ summoned the occupation army to chase away shepherds from their nearby grounds. The soldiers arrested one of the shepherds, a boy from the village of Tha’ala, took him for a ‘drive’ in a jeep and released him half an hour later without phone or water, near Tawane. From there he had to walk home, in the noon hours.
The occupation forces destroyed, cut and confiscated water pipes at Jawaiya north of Tawane on Tuesday, and arrested one of the villagers. On Thursday they confiscated 2 bulldozers doing farm work at Rafa’iya and on Friday arrested and shackled a Palestinian activist at a barrier near Susya and released him an hour later when a lawyer intervened. The same day they also issued a ‘closed military zone’ order near ‘Avigail’ outpost in order to prevent a protest and prayer by Palestinians at the site.
On Saturday, settlers from the outpost ‘Avigail’, aided by the occupation forces, prevented Palestinian landowners and surveyors from surveying their fields in the Wadi below the outpost. The same day, settlers attacked a flock and shepherds in Touba; it was reported that a boy and two sheep were injured.
At Saroura international activists shared a work day with Palestinian activists on Friday, to rehabilitate areas set aflame and terrorized by outposts during recent weeks, and on Saturday a work day was held by activists to repair damages wrought by settlers in Tawane and in Rakeez. Activists accompanied the Palestinian landowner on his weekly visit to Umm Al Arais, this time unhampered.

Jerusalem
On Friday the weekly protest vigil was held in Sheikh Jarrah. Policemen put up a checkpoint at the entrance to the street where colonists had taken over many houses, prevented the demonstrators from entering and confiscated Palestine flags. That night police and army forces invaded Silwan, violently attacking its inhabitants and wounding 6 of them. 6 of the 12 parts of Silwan neighborhood are now in danger of ethnic cleansing.
On Sunday, July 4, the occupation authorities demolished 2 structures in Issawiya and another in Jabal Mukaber, and on Tuesday they demolished a schoolhouse in Shuafat and another structure in A-Tour.

Throughout the West Bank
On Friday, July 9, the occupation forces prevented a demonstration by Palestinians protesting the takeover of their land by the settler outpost built 9 months ago in the A-Ras area (Salfit district).
On Friday, a week after the ‘evacuation’ of Evyatar outpost, during a Palestinian demonstration of Beita villagers protesting the robbery of their lands, army forces shot and wounded hundreds of Palestinians, 23 of them with live bullets. Among the wounded is the boy Mohammad Hamail, injured by a live bullet in his gall bladder and by shrapnel in his hip.

This entry was posted on Sunday, July 11th, 2021 at 18:19 and is filed under Activities, English. You can follow any responses to this entry through the RSS 2.0 feed. Both comments and pings are currently closed.