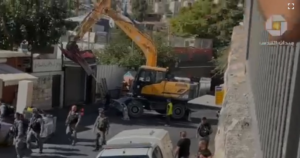 A week of nightly settlers’ terrorism in the Palestinian villages around ‘Havat Maon’, ‘Mitzpe Yair’ and ‘Susya’; Palestinian landowners dismantled a structure erected on their lands this week next to the ‘Avigail’ outpost, and were arrested – the structure was rebuilt Saturday night; a settler brought 4 dogs to harass a flock in Hamra in the Palestinian Jordan Valley – the Palestinian shepherd tried to distance a dog and was arrested; the Jerusalem police violently dispersed a Palestinian demonstration held on Tuesday in protest of house demolitions in Silwan; Israeli soldiers shot in the chest and killed Mohammad Hassan from the village of Qusra as he was defending his home from the terrorist gangs of ‘Esh Kodesh’; 3,100 Palestinians were arrested throughout the West Bank and East Jerusalem during this past May;

South Hebron Hills
This week, terrorist gangs from the settlert outposts ‘Havat Maon’, ‘Mitzpe Yair’ and the colony ‘Susya’ attacked Palestinian farmers and shepherds at Tawane and Susya on Sunday, Tuesday, and Wednesday, mainly in the evening and night. On the night between Thursday and Friday, settlers attacked two workers doing infrastructure works near Mughayer Al Abeed.
Construction work also continued on a new outpost north of ‘Avigail’ and proceeded most nights this week. On Friday morning, July 2, the Palestinian landowners came to and removed the structure that was erected on their fields. Settlers arrived accompanied by ‘security forces’ in great numbers. Two of the landowners were arrested and one of them was accused of attacking a settler. The two were released in the noon hours of the same day. That day, Palestinian villagers gathered in Abu Hani’s compound near ‘Avigail’ for protest and prayer, and the occupation forces dispersed them, declaring a vast area as a closed military zone that included a large part of the area’s villages, until the next day at noon. On Friday afternoon, settlers invaded lands of Humra again, and in the evening attacked a shepherd who went out to water his flock at a water hole above Mughayer Al Abeed. On Saturday morning, terrorists from ‘Mitzpe Yair’ attacked Palestinian shepherds near Atariya.
On Saturday many activists took part in a work day to repair damages from the attack on Tawane and Rakeez last week. Activists spent the night between Friday and Saturday at Simra, remaining there through the weekly visit of the landowner at Umm Al Arais to his nearby fields, this time unhampered.
The outpost structure that had been dismantled north of ‘Avigail’ was erected anew in the night between Saturday and Sunday.
On Wednesday, June 30, the occupation forces confiscated two structures and much construction material at Zanouta.

Palestinian Jordan Valley and West Bank Hill Range
Activists accompanied shepherds and their flocks around Auja on Sunday, Monday, Tuesday and Thursday. On Monday a policeman tried to prevent the grazing on the false claim that the entire area is owned privately by Omer Atidiya of ‘Havat Omer’, a settler-colonist outpost with the laundered name of ‘Einot Kedem’.
Shepherd accompaniment was held most days this week in Hamra as well. On Sunday and Monday the settlers ‘only’ harassed the shepherd and activists, and when the police intervened, they left. On Tuesday, the violent settler from the nearby outpost came with 4 dogs who frightened the sheep and would not let them eat. The police was summoned but took its time, and in the meantime the shepherd tried to distance a dog by kicking it, and when the police came he was arrested and the activists were taken in for questioning. The shepherd was released under bail from Ofer jail, and was back grazing accompanied by activists on Thursday and Friday, unhampered.
At Samara activists accompanied grazing on Friday morning, and prevented an attempt by the Israeli army to get the flock out of the field owned by the Palestinian shepherd, near the army base at Hemdat Junction.

Jerusalem
On Tuesday a demonstration took place in Silwan protesting house demolitions in the Al Bustan neighborhood and the ethnic cleansing policy there. Israeli police and Border Police forces dispersed the protest violently, 3 Palestinians were arrested and the Red Crescent reported 13 wounded. About 100 houses in this neighborhood face demolition in favor of the ‘King’s Garden’ project that would connect the settler-colonies of ‘Ateret Kohanim’ in Silwan with the ‘Ir David’ tourist compound, belonging to the settler-colonist association Elad.
On the night of June 29, a crowd of settlers gathered at the stolen Rawi home in the Sheikh Jarrah neighborhood, and threw stones at the Palestinian homes nearby. The same night, Judo-Nazis in Jerusalem attacked an Arab bus driver in Jerusalem.
On Friday, during the usual protest vigil in Sheikh Jarrah, policemen grabbed a picture of a Palestinian mortal casualty from the participants who were holding it, as well as Palestine flags.

***
Israel is conducting a huge arrests operation throughout the West Bank and East Jerusalem. 3,100 Palestinians have been arrested during May alone, according to the Al Jazeera news network.

***
On Saturday, July 3, dozens of terrorists from the violent outpost ‘Esh Kodesh’ attacked Palestinians who were renovating a house on the outskirts of Qusra village, backed up by Israeli army forces. The workers escaped under a shower of teargas and stun grenades. According to Palestinian sources, Mohammad Hassan, 21-yuears-old, locked the doors, climbed to the roof and threw stones from there in order to distance the attacking crowd from his home. Snipers fired 3 live bullets at his chest. The army let the settler-colonists break into the house and run wild inside, and did not let the family nor medical teams come in to aid him. The army took the body away. The report of the incident and killing was minimal in Israeli media, as usual, and relied on the Israeli army’s statement that the suspect had thrown an improvised explosive charge and was shot dead by soldiers.

This entry was posted on Sunday, July 4th, 2021 at 19:36 and is filed under Activities, Activity Spotlight, English. You can follow any responses to this entry through the RSS 2.0 feed. Both comments and pings are currently closed.