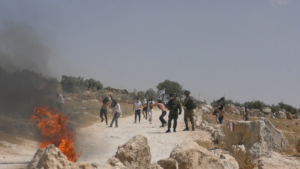 Dozens of terrorists came out of the outpost ‘Havat Maon’ on Saturday on two rounds of massive assault against the Palestinian village of Tawane and its lands, beat up villagers with clubs and hurled stones, set fields on fire, vandalized trees, aided by the Israeli army that shot teargas and stun grenades at the attacked Palestinian villagers – a soldier passed on his weapon to a settler sitting in a military vehicle, and the latter fired live ammunition at a house on the village outskirts; Occupation forces prevented the Palestinian inhabitants of the South Hebron Hills from demonstarting against the settlers ‘protest’ march on their lands this week, while enable\ing a new outpost-ranch to be built near ‘Avigail’; Settlers’ incursions into Palestinian-owned fields and harassment of Palestinian shepherds continues in the Palestinian Jordan Valley and the West Bank Hill Range; Another week of confrontations and police brutality behind the apartheid checkpoint set up in the heart of Sheikh Jarrah neighborhood in Jerusalem; Yet another Palestinian severely wounded in clashes in Beita protesting the new outpost ‘Evyatar built on the village lands;

picture: Terrorists from ‘Havat Maon’ outpost, together with Israeli soldiers, collaborating in an assault on the Palestinian village Tawane, Saturday, June 26, 2021

Palestinian Jordan Valley and West Bank Hill Range
Activists spent Monday night in Deir Jarayer (Hill Range), and early on Tuesday morning they documented the incursion of settlers and their flocks into Palestinian-owned tended fields and groves. A policeman arrived but the army denied him escort in order to follow and identify them. On Friday (25.6), activists completed harvesting in the fields near Tayibeh Junction and prevented incursions of settler-colonists and their flocks near Deir Jarayer.
Most days this week shepherds were accompanied in Hamra and Auja in the Palestinian Jordan Valley, as well as in Samra on Friday. On Monday as well as Wednesday, settler-colonists attacked with clubs, stones and curses a Palestinian shepherd, his flock and the accompanying activists in Hamra. The shepherd persisted despite constant harassment, but the grazing was disturbed. In Auja on Friday, activists witnessed a settler charging with his truck right into grazing flocks, scattering them in all directions.

The South Hebron Hills
On Monday, June 21, settlers held a ‘protest march’ in the West Bank. About 50 of them came close to the houses of the Palestinian village of Mufaqara. When Palestinian villagers came out to protest this invasion, they were dispersed by Border Policemen and soldiers who fired stun grenades at them, blocked off the area for Palestinian traffic and confiscated Palestine flags. In the afternoon, settlers placed a sign at the intended assembly site of the march north of ‘Avigail’ outpost. Palestinian villagers and activists dismantled this sign, and in response the settlers went wild and summoned the army, which detained one of the Palestinians but released him after he was searched. About 150 settlers marched to the site accompanied by army, police and Border Police. The occupation forces fired stun grenades at the Palestinians and declared the site a ‘closed military zone’, enabling the settlers to hold their assembly while distancing the locals and activists. A Palestinian woman was wounded in the leg by a stun grenade. The next day, Tuesday, settlers and their flock from ‘Mitzpe Yair’ outpost moved to a bus placed near ‘Avigail’ and set up a sheep pen there.
On Friday, June 25, an action was held by local Palestintans in protest of the settlers’ march and the new ranch-outpost set up near ‘Avigail’. The ranchers attacked the demonstrators and tried to break into Mufaqara village. One of them, on horseback, tried to trample a Palestinian activist. The same day, a settler riding a tractor broke into tree groves in the Palestinian village of Umm Al Kheir, where villagers were putting up a wedding tent. The settler summoned an army force that raided the village in search for ‘illegal construction’.
On Saturday, June 26, a gang of masked terrorist settlers from the ‘Havat Maon’ outpost held a massive attack on Tawane village. Some 30-40 settlers raided the villagers’ cultivated areas, started fires in many places, hurled stones and clubbed the villagers who were trying to protect their lands. One of the villagers was wounded by clubbings and needed six stitches in his head. The settlers vandalized and cut down many trees at Rakeez and Humra and burnt down a storage space at Rakeez. These terrorists were accompanied all the way by Israeli armed forces who assisted them, firing teargas and stun grenades at the attacked Palestinians. A soldier passed on his weapon to a settler sitting in the military vehicle, and the latter fired live ammunition at a house on Tawane’s outskirts. When the settlers had enough and left, the commander of the military force issued a ‘closed military zone’ order and prevented the Palestinian villagers from getting to their fields to see to the damages. About an hour later, settlers came with a flock to Humra, entered the fields closed off by military order, and one of them stripped naked and entered the water hole in the field, in view of the villagers watching from the hill and calling out for the invaders to leave. The Palestinians began to descend to the field, the settlers threw stones at them and again a mob of masked men from the outpost assembled at the outskirts of Tawane as well. This time the soldiers blocked them and showed them the closed zone order – as well as to the Palestinian villagers who were inside their own homes (!) at the outskirts of the village.
On Wednesday, June 23, the occupation forces blocked two roads leading to Massafer Yatta from the Mufaqara area. The works lasted many hours, during which heavy damage was done to the water pipes, vitally needed by the nearby villages.

Jerusalem
On Monday night, June 21, settler-colonists confronted the Palestinian residents of the Sheikh Jarrah neighborhood, under siege of the police checkpoint that prevents them from moving freely and having visitors, while enabling entrance of any Jew declaring intent to ‘pray’ at the tomb of Simon the Righteous at the end of the street. Two 14-year-old Palestinians were arrested on the suspicion of hurling a firebomb at one of the settler-colonists’ homes, and another two were arrested at night shooting fireworks. The Palestinian residents claim that a settelr had thrown the firebomb. The Red Crescent reported 20 Palestinians wounded, two from rubber-coated bullets, and the rest from teargas and clubs. The police reported a Jewish woman wounded by a stone in her back, needing medical care. The next day, Tuesday, MKs Smotritch and Struck came to heat up the atmosphere, and as expected – ran into residents’ protest. The police intervened and dispersed everyone, including the MKs and their entourage.
On Friday, June 25, at the weekly protest vigil at Sheikh Jarrah, police attacked the protestors and arrested one carrying the Palestine flag, although no law forbids this. The protestor was released the same evening from Shalem Police Station, where policemen tore off the Palestine flag colors from the collar of one of the activists waiting there.

Beita
The occupation forces are shooting to kill Palestinians protesting the ‘Evyatar’ outpost built on lands belonging to the village of Beita. Four Palestinians, among them a 15- and a 16-years-old have been killed within a month and a half. Last Friday, too, the Red Crescent reported a person severely wounded by gunshot, as well as 3 wounded by rubber-coated bullets and cared for on the spot.

This entry was posted on Monday, June 28th, 2021 at 18:17 and is filed under Activities, Activity Spotlight, English. You can follow any responses to this entry through the RSS 2.0 feed. Both comments and pings are currently closed.