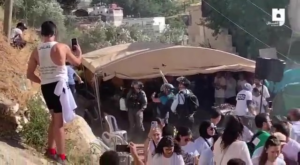 Terrorists from settler outposts in the South Hebron Hills started fires in the Palestinian villages of Harouba and Touba – the Israeli army and police refused to intervene; after a lull during the fighting in Gaza, the occupation forces returned to demolish structures and roads of Palestinian communities in Area C – at the same time the Jewish settlers are fully backed up in their ‘illegal’ works on expansion, paving new roads and building new outposts; In Beita village, Palestinian demonstrating against a new outpost on their lands were teargased by a drone, while soldiers shot stun grenades, rubber-coated and live ammunition, causing 20 casualties, including a medic; marathon Sheikh Jarrah reached its finishing line in Silwan, where army and police attacked the runners with stun grenades, sponge ammunition and teargas – 12 people were wounded, 4 arrested;

photo: Armed forces attack the runners of the Sheikh Jarrah marathon at the finishing tent in Silwan, Jerusalem, May 4, 2021

South Hebron Hills
This week, after a short lull during the latest round of fighting with Gaza, the occupation forces have returned to carry out their destruction operations of Palestinian communities in Area C. On Monday, May 31, they demolished two dwelling tents and a large sheep pen around Tel Zif, leaving 15 people, 9 of them children, and about 300 sheep without shelter for the summer. The forces continued to Bawab, where they confiscated a caravan and instructed the destruction of two tents that were not confiscated. On the morrow they destroyed and confiscated a dwelling tent and shacks at Widad, near the ‘illegal’ outpost Asa’el.
Around Massafer Yatta (firing zone 918) orders were issued to cease works on 4 structures at Fakhit as well as two cease-work orders for two access roads between Palestinian communities.
At the same time, expansion works continued on the lands of En Al Beda, opposite the settler-colony ‘Maon’ were renewed on Sunday, May 30, violating the Supreme Court ruling to cease them. Other expansion works of ‘illegal’ outposts were documented on Thursday near the community of Mughayer Al Abeed (as the local thugs practiced their slingshot skills), and at ‘Mitzpe Yair’ where some new caravans were brought late at night. On Friday a new outpost sprung up including at least 4 caravans on the lands of Zanouta west of road 60, opposite the entrance to settler-colony ‘Sham’a’. Likewise, on June 1, the paving of a new road was documented between the outposts of ‘Havat Talya’ and ‘Mitzpe Yair’, some of it on privately owned Palestinian land near Bir Al Eid.
On the night of June 1, settler-colonists set fire to a field in Harouba. Later, settler-colonists from the new outpost near Mughayer Al Abeed came to Touba and set aflame 82 bales of hay purchased by a Palestinian family in the village. The family members rushed there, saw the arsonists escape to the wadi, and heard many shots fired from the outpost. The family managed to save about half of the hay, while 41 bales were totally burnt. Palestinian firefighters arrived around 11:30 p.m. and worked for hours to put out the fire. Army forces that arrived refused to come near, and the police arrived only at 4 a.m. and also refused to approach. A policeman sent the family to lodge a complaint at the station. A complaint was lodged the next day.
Palestinian shepherds were chased away on Sunday from their own privately owned lands in Ta’ala and in Susya by settler-colonists, backed up by the soldiers stationed in the area to do their bidding. On Saturday, June 5, settler-colonists from ‘Mitzpe Yair’ once again blocked the vehicle of the Palestinian landowner who came as usual on Saturday to his fields at Umm Al Arais, with his family. The army detained one of the Palestinians and released him after the family spent some time in its field and then left. The settler-colonists tried to attack houses in nearby Simra, where activists were staying for fear of injury to the villagers. The army prevented the settler-colonists from entering.

Palestinian Jordan Valley and the West Bank Hill Range
Ever since the ‘illegal’ erection of the settler-colonist outpost ‘Ma’ale Ahuviya’ on the West Bank Hill Range, it has persisted in sowing violence and fear in the entire area. On Sunday settler-colonists were reported coming out of the outpost with a flock to graze the tended fields of Deir Jaghayer village, throwing stones at 2 Palestinian cars there and smashing their windshields with clubs. A Palestinian sitting in one of them was lightly wounded. On Tuesday, Wednesday and Thursday, invasions were reported of settler-colonists’ flocks into village lands. All activists’ summons of the police about this matter were unanswered.
At Tayibe Junction activists returned on Tuesday and Thursday to help harvest fields, and this went unhampered. However, after a short lull, settler-colonists returned to invade Palestinian lands with their flocks. On Tuesday and Thursday the activists managed to chase the flocks away from the fields.
Activists managed to accompany shepherds most days this week in Auja and in Hamra, in the shadow of unceasing harassment by setlter-colonists and the army that does their bidding. On Sunday, soldiers at the service of ‘Havat Omer’ tried to prevent Palestinian grazing at Auja and even played music very loudly, but the shepherds and activists remained in place until the end of grazing. In Hamra, too, on Wednesday, a settler-colonist violently tried to chase a Palestinian flock and its accompaniers, but grazing was carried out to the finish. On Thursday, a shepherdess from Auja was attacked on her way back from grazing by the security official of ‘Mevo’ot Yericho’, who scared her to tears before activists arrived. On Thursday, the presence of activists at En Al Hilwa prevented the chasing away of Palestinian flock from the spring by settler-colonist terrorists from the nearby settler-colonies.
On Monday, a tour of the Palestinian Jordan Valley was held by activists for tour guides from Absalom Institute, during which they visited several Palestinian communities and heard about their need to have activist accompaniment and help clean up water holes and repair demolitions. At En Sukut the visitors discovered the spring fenced in, and that the northern gate through which the Palestinian shepherds had led their flocks to water until now – was locked. At Hamra the tour’s vehicles were blocked on a track paved by a settler-colonist from the nearby outpost, and heard a lot of swearing and threats. A complaint was lodged with the police.

Jerusalem
At the weekly demonstration protesting settler-colonist takeover of the Sheikh Jarrah neighborhood on Friday June 4, a demonstrator was arrested with the claim that she insulted a public servant… The same day, marathon Sheikh Jarrah took place. The runners arrived at the finishing line in Silwan, where they gathered to freshen up in a tent pitched in the Batn Al Hawa neighborhood, also threated by settler-colonist takeover. They drank water, sang songs, and rested – when the occupation forces invaded the tent without any reason, attacked them with stun grenades, sponge ammunition and teargas. Four runners were arrested. The Red Crescent reported 12 people wounded.
On Saturday, the police forces invading Sheikh Jarrah for weeks now arrested Al Jazeera’s Jerusalem correspondent Jifara Al Budri. They restrained her, broke her camera and then her arm. For the past month, only residents of the neighborhood and journalists with papers from the Government Press Office are allowed in the neigborhood. Al Burdri, one of the veteran journalists in town, naturally holds such a certificate. On the morrow, the police arrested Muna Al Kurd, a resident of the neighborhood and one of its prominent spokespersons in international media, her brother Mohammad Al Kurd, and the activist Zoheir Rajbi of Silwan.
The weekly protest in Sheikh Jarrah takes place every Friday. We will meet at the Sheikh Jarrah Garden, Nablus Road and Dahlmann St. at 4 p.m

***
On Friday, June 4, at a demonstration held in Beita village (Nablus district) protesting the erection of a new outpost on Palestinian lands, the occupation forces used a drone to fire teargas at demonstrators. In addition, they fired live ammunition and rubber-coated bullets at protestors, among others at a volunteer medic. The Red Crescent reported 20 wounded, one of them in serious condition.
House demolitions in the occupied territories were renewed after a lull during the fighting in Gaza. At Wadi Fuqin (Bethlehem district), the occupation authorities demolished 2 structures, one in Fureidis south of Bethlehem, and another 2 structures at Hizma and Tulmas near Jerusalem.
This week a report prepared by Yesh Din association was published, dealing with the criminal acts by settler-colonists running wild in Palestinian communities and backed up by the Israeli army and police.

This entry was posted on Sunday, June 6th, 2021 at 18:10 and is filed under Activities, Activity Spotlight, English. You can follow any responses to this entry through the RSS 2.0 feed. Both comments and pings are currently closed.