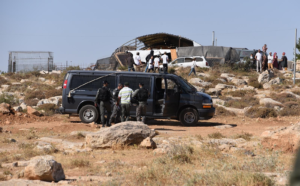 Large army forces raded the Palestinian village of Tawane in the South Hebron Hills twice this week, arresting several of its inhabitants as ‘wanted men’; A Palestinian landowner was again blocked by settlers from accessing his land at Umm Al Arais, then arrested at their bidding along with another activist; Palestinian and Israeli activists harvested at Tayibe Junction; Incursions of settlers’ flocks and expulsions of Palestinian shepherds continue, backed by Israeli army and police, in the West Bank Hill Range and the Palestinian Jordan Valley; Occupation forces killed a Palestinian demonstrator shooting him in the back during protest against a new outpost on the lands of Beita village, near Nablus; Demonstrations in Jerusalem protesting the expulsion of palestinans from Sheikh Jarrah and Silwan and police violence

picture: The Palestinian landowner at Umm Al Arais is arrested on his land, as settlers from the outpost ‘Mitzpe Yair’ who attacked and seriously wounded him this year look on.
May 29, 2021

South Hebron Hills
Armed forces in great numbers, including riot police units, raded Tawane on Sunday May 23, arrested 3 villagers whose pictures they presented as ‘wanted men’, shattered windows, damaged property, and pushed down a girl who was injured in her eye. The forces returned on Wednesday and arrested another 2 villagers, one of whom was released several hours later. Proceedings for remands are supposed to be held on Thursday at Ofer prison.
On Thursday morning, May 25, a donkey entered Tawane from ‘Havat Maon’ outpost, followed by 2 settler-colonists. The army managed to get the donkey and the settler-colonists out.
On Tuesday, settler-colonists from the new outpost near Mughayer Al Abeed attacked a Palestinian boy shepherd with stones and tried to steal his donkey. From there they went on to invade an olive grove and vandalize a water hole.
On Saturday, May 29, settler-colonists blocked the car of the Palestinian landowner at Umm Al Arais. At least five vehicles bearing a large army force arrived immediately to the spot and prevented the family of the landowner from entering the field as they have done every Saturday for the past 10 years. The landowner insisted on his legal rights and was therefore arrested along with an activist, and both were taken to the police station, questioned and released.
All days this week, a military unit neglected its duty, dictated by a Knesset committed, to accompany the Touba children on their way to school in order to protect them from the harassment of the ‘Havat Maon’ settler-colonists. The soldiers kept arriving very late.
This week Palestinian teachers from Yatta on their way to school at Jinba cleared a part of the barrier on the way to Bir Al Eid.
Activists have carried out restoration work in Saroura following the settlers’ arson there last week.
At Atariya, it was reported that settler-colonists have fenced in fields and taken over more farmland.

Palestinian Jordan Valley and West Bank Hill Range
Activists worked on Sunday, May 23, harvesting grain around the Tayibe Junction. Following a complaint by settler-colonists of the ‘Benyamin’ regional council, policemen stopped the work, but it was renewed in a short while after checking with the DCO. On Friday, May 28, Palesinian and Israeli activists continued the harvest.
Flocks belonging to the new violent outpost of ‘Maale Ahuviya’ continue to invade tended Palestinian fields in Deir Jarayer, eating up the crop. On Wednesday (26.5), the owners of the land filed a complaint to the police, but on Friday again the settler-colonists’ flock was there. Palestinians reported they could not get the police on their phones. Activists were not answered either, and the settler-colonists’ flock finished up the entire crop.
Shepherds were accompanied to their grazing grounds most days this week nearly unhampered at Hamra, Auja and Makhoul. However, on Wednesday at Hamra soldiers chased away a shepherd and his mother with their flock at the bidding of a settler-colonist, claiming they were grazing inside a firing zone – a claim they refused to supprot with documents. The mother explained that their family flocks had grazed there for the past 50 years, but the soldiers threatened the shepherd with detention and even arrest, forcing the flock away. A similar attempt of soldiers to expel shepherds from their grazing ground near Auja that day failed, as the activists insisted and the army gave up, so that the flock grazed until sated.
On Friday activists participated in the restoration of sheep pens at Samra. On the same day settler-colonists attacked with stones shepherds at En Al Hilwa and chased them away from the spring. This time soldiers notified the attackers that they had no authority to do so, and that the Palestinian shepherds have access to the spring.

This entry was posted on Sunday, May 30th, 2021 at 18:04 and is filed under Activities, Activity Spotlight, English. You can follow any responses to this entry through the RSS 2.0 feed. Both comments and pings are currently closed.