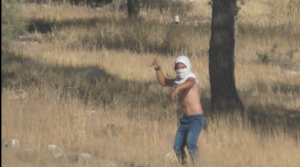 Settlers from ‘Havat Maon’ set fire to Palestinians’ fields, an olive grove and a dwelling cave in the South Hebron hills, then attacked the village of Tawane backed up by Israeli army forces that shot live fire at the Palestinians when the latter tried to resist; Demos were held in Jerusalem to put an end to violence, a similar demo in the Tunnels Checkpoint was violently dispersed and 8 protestors arrested; Sheikh Jarrah neighborhood is partly still out of bounds for non-resident Palestinians, while the police enables Jewish settlers and their supporters free access; Palestinians’ fields were burnt down at Deir Jarayer and settlers’ flocks are still invading Palestinian-tended fields in the area; Occupation forces prevented entry of a Palestinian landowner to his fields in Umm Al Arais, while settlers from ‘Mitzpe Yair’ punctured car tires in nearby Simra

A ceasefire between Israel and Hamas on Friday put a stop to the latest campaign of slaughter and destruction, leaving 242 Palestinians dead, of them 66 children, and 12 Israelis dead, of them 2 children. In the West Bank occupied by Israel, 27 Palestinians were killed, of them 4 children.

Jerusalem
On Wednesday, May 19, a demonstration was held in Jerusalem calling for a ceasefire and an end to violence, and on Saturday another demonstration was held calling for an end to violence and healing the rupture between Jews and Arabs. A similar demonstration, meant to take place on Friday at the Tunnels Checkpoint south of Jerusalem, was violently dispersed by the Israeli army, and 8 demonstrators were arrested.
The weekly demonstration in Sheikh Jarrah took place unhampered this Friday, but next day police violently dispersed a protest vigil that Palestinian activists attempted to hold there. Concrete barriers and policemen are still blocking a main part of the neighborhood to non-resident Palestinans and supporters, whereas settlers, their guests and right-wing activists get free access.

South Hebron Hills
Last Saturday, May 22, settler-colonists again came out of ‘Havat Maon’ on a rampage of destruction and violence around Tawane, Rakeez and Saroura. First they tried to set fire to a wheat field in Harouba Wadi near the outpost, but the strong wind blew the flames towards the outpost. When activists arrived, the settler-colonists charged at them, some masked and armed with clubs; soldiers were present but did nothing to stop them. The settler-colonists invaded olive groves that are supposed to be out of bounds for Israelis by military order, and, escorted by soldiers, began to throw stones at Palestinians working there. Only after a while, when the Palestinians realized that the soldiers were protecting the settler-colonists and not preventing either the invasion nor the stone-throwing, did some of them begin to throw back stones. The soldiers immediately attacked the Palestinians; some of them fired live ammunition. Shots were also taken at a B’Tselem photographer present, who shouted that he was a photographer to no avail. Another group of settler-colonists invaded Saroura, put fire to a wheat field and an olive grove, then broke into a dwelling cave that was fortunately empty of people at the time, destroyed all the property inside and burnt it down. The whole while army and police forces were present, doing absolutely nothing to prevent the arson and destruction. Activists put out the fire after much damage was done. Meanwhile, another gang of settler-colonists arrived at a house on the edge of Tawane village and began throwing stones on the village houses. Palestinian villagers faced them, not throwing a single stone back. In this situation too, an army force arriving there chose to enable the stone-throwing settler-colonists to leave the place in peace.
On Monday, May 17, villagers discovered that about 100 olive trees were cut on previous days in a grove near Manzal. Likewise, settler-colonists from ‘Mitzpe Yair’ outpost once again blocked with boulders the road to Bir Al Eid and to the western villages in firing zone 918.
On Saturday, May 22, soldiers, police and officials of the Civil Administration again prevented Palestinian landowners from accessing their lands in Umm Al Arais, then refused to register the complaint of the Palestinian landowner regarding the invasion by settler-colonists and their flocks into his fields. While the soldiers were busy with their illegal prevention of the landowner from accessing his field, settler-colonists entered nearby Simra and punctured all the tires of two vehicles. With this, too, the soldiers refused to deal.
Activists accompanied shepherds in Zanouta on Saturday, and documented a settler-colonist grazing his flock inside privately owned Palestinian fields. Although he did not hesitate to remain in the field even with the activists present, he left before police arrived on the scene. Documentation of this invasion was handed over to po9licemen, who demanded that the landowners come to the Police Station to complain. In the afternoon the same settler-colonist was seen again entering the field with his flock and destroying the crop.
Grazing accompaniment and harvesting around Atariya near ‘Mitzpe Yair’ outpost went unhampered.

Palestinian Jordan Valley and the West Bank Hill Range
Around Tayibe junction and Deir Jarayer on the West Bank Hill Range settler-colonists continue to bring their flocks into Palestinian tended fields and destroy the crops. This week cases were documented in which flocks were taken, among other places, into olive tree groves. When activists notify the police of such an invasion, the settler-colonists exit and then return after the police leaves. On Friday, May 14, and again on Sunday May 16, grain fields were set afire near Deir Jarayer. Activists summoned police but instead of investigating the fire, the policemen entered the village.
Activists stayed in the area on Sunday, Monday, Wednesday and Friday. On Monday May 17, settler-colonists blocked the activists’ car, threatened them and verbally abused them. A policeman arriving on the scene asked the settler-colonists to leave, but naturally did not arrest any of them.
At Auja in the southern Palestinian Jordan Valley, activists accompanied shepherds on Sunday and Wednesday, both occasions went unhampered.
In Farisiya, too, activists accompanied shepherds on Sunday and Wednesday. On Wednesday soldiers tried to chase away the shepherds and activists at the instructions of the settler-colony ‘Rotem’ ‘security official’, but after an army commander intervened, the grazing was allowed to continue.

This entry was posted on Sunday, May 23rd, 2021 at 18:49 and is filed under Activities, English. You can follow any responses to this entry through the RSS 2.0 feed. Both comments and pings are currently closed.