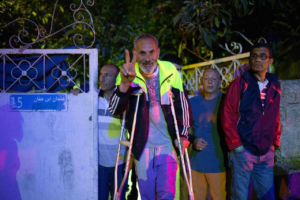 At the height of the Ramadan month, Jerusalem police attacked Palestinians with extreme violence at Haram Al Sharif and inside the Al Aqsa Mosque, at the Damascus Gate and in the neighborhood of Sheikh Jarrah, with hundreds of wounded and arrests, all week long – provocations by settlers and Judeonazis against Palestinians in the city were backed up by Israeli ‘security forces’ – protests by young Palestinians against the eviction of Sheikh Jarrah inhabitants are ongoing in spite of police violence – the Israeli Supreme Court postponed hearing the appeal against evictions in Sheikh Jarrah at the request of the State Attorney General; Severe assaults by settlers and army on Tawane, Mufaqara and Simra in the South Hebron Hills – in Tawane, settlers fired military weapons – a policeman was documented collecting live ammunition casings from a settler’s weapon and returning them to him – Palestinians’ wheat fields went up in flames because of the firing of teargas grenades; Physical assaults, arson and stone-throwing by settlers backed up by the army in Bourin, Jaloud and Qusra;

photo: Saleh Diab, activist and resident, after police broke his leg, prior to his arrest on Fri May 7

Jerusalem
All week the police exerted severe violence upon Palestinians headed for prayer and protestors, especially in the neighborhood of Sheikh Jarrah, at Temple Mount and the Damascus Gate, ruthlessly using stun and teargas grenades, sponge bullets, the ‘skunk’ truck, and horsemen, targeting uninvolved passersby including children, the elderly and women. Hundreds have been wounded. Some of them, hurt by sponge ammunition in their faces, have systained skull fractures, others lost eyes.
Settler-colonists and members of Judeonazi terrorist organizations did everything in their power to arouse provocations at Sheikh Jarrah. They attacked Palestinians and in one case were documented firing live ammunition from their handguns, getting full protection from Israeli police forces. Early this week, police broke into the home of Salah Diab, activist and resident of the neighborhood, and fractured his leg, and on Friday he was arrested at home minutes before the weekly protest began. His arrest was prolonged on Saturday, while dozens of activists demonstrated in protest opposite the Jerusalem Magistrates Court in the Russian Compound.
During the week dozens of Palestinian detainees were reported, and not a single Jewish rioter. All this did not prevent hundreds of Palestinians from persisting in their courageous protest and struggle against the persecution, violation of sacred Islamic icons and the authorities’ intention to expel Palestinian families from their Sheikh Jarrah homes and give them over to Jewish settlers.
On Friday police broke into mosques on Temple Mount and hurled stun grenades in during prayer. Stun grenades were also thrown into the first-aid station for the wounded put up at the Haram Al Sharif square by the Red Crescent. On Saturday, the police tried to prevent buses with Moslems on their way to the Leilat Al Kader prayer at Haram Al Sharif/Temple Mount. Consequently, hundreds of people began to make their way on foot on roads leading to Jerusalem, and traffic to and from the city was at a standstill. After some hours, the police allowed vehicles to proceed and people headed for prayer were allowed to continue.
On Sunday, May 9, the Israeli Supreme Court, at the request of the Israeli Attorney General, decided to postpone its session on the appeal by Palestinan residents of Sheikh Jarrah for at least 30 days. The meaning of this ruling is a certain postponement of the expulsion of these families from their homes.
Activists stayed with the families in Sheikh Jarrah all week. On Friday, during the weekly demonstration in the neighborhood, the police prevented Israeli and Palestinian activists from entering the neighborhood and dispersed them with stun grenades. Two demonstrators were wounded and taken to hospital

South Hebron Hills
Attack by settler-colonists backed up by the occupation forces continued in the South Hebron Hills. On Saturday evening, May 8, a group of several dozen settler-colonists from ‘Havat Maon’ began to attack homes in Tawane. Some fired live ammunition from military weapons. Soldiers and police arriving at the site did not prevent the attack, and helped the assailants by firing a large quantity of teargas into the inhabited parts of Tawane. Some of the teargas grenades fell in grain fields and lit fires. A policeman standing next to a settler-colonist who used his personal weapon was filmed collecting casings of the bullets fired by the settler-colonist and handing them to him, an act of tampering with evidence by a policeman committing a violation.
On Tuesday, May 4, settler-colonists from ‘Havat Maon’ and the new outgrowth of this violent outpost near Mughayer Al Abeed tried to chase away Palestinian shepherds from their grazing grounds around Harouba. They stole a donkey from them and attacked activists accompanying the shepherds. On Thursday, May 6, once again the outpost settler-colonists chased away Palestinian shepherds near Mughayer Al Abeed while threatening and pushing shepherds and activists accompanying them. On Saturday, May 8, they also tried to take over a water hole belonging to and used by Palestinians of the area. An activist trying to defend the waterhole was pushed, fell and was hurt in the head. Later on the settler-colonists accused the Palestinians of stealing their sheep. Army forces arriving there accompanied the settler-colonists into Mughayer Al Abeed in order to look for these sheep, and only after the search did the settler-colonists admit that not a single sheep in their flock was missing, and that such stealing had never taken place. Activists accompanied shepherds in the area all week, and on Tuesday night documented construction work by settler-colonists at the new outpost site that had been dismantled by the army 2 weeks ago, and inhabited since once again. On Monday, activists documented a settler-colonist entering his flock for grazing in privately owned Palestinian grain fields around Mashacha near ‘Havat Maon’.
On Thursday, May 6, a Palestinian shepherd from Mufaqara was attacked by settler-colonists coming from ‘Avigail’ outpost while watering his sheep from a privately owned Palestinian water hole. The settler-colonists attacked the flock and its shepherd with stones, and he was wounded by a stone and sustained an arm fracture.
For several nights activists stayed at Simra, close to the outpost ‘Mitzpe Yair’, and on Wednesday and Thursday they documented a settler-colonist from this outpost entering his flock in grain fields belonging to Simra farmers. On Saturday, when as every week the owners of Palestinian lands came to their fields in nearby Umm Al Arais, settler-colonists from ‘Mitzpe Yair’ came towards them, some of them having been involved in attacked the Palestinian landowner there 2 months ago. The settler-colonists were joined by soldiers and Border Policemen, who forbade the landowners to access their fields, presenting a closed military zone order, blatantly violating a ruling by the Israel Supreme Court and army instructions forbidding the use of such an order to prevent Palestinian landowners from accessing their land. In spite of the order, the family and activists accompanying it insisted on accessing the land where some olive trees were recently planted. When arriving at the grove, they discovered that all the olive saplings had been eaten by the flocks that the outpost settler-colonists have been taking there time and again.
Opposite the settler-colony of ‘Maon’ settler-colonists continue their development works in spite of an apparent ruling issued by the court forbidding such works there. On Friday, May 7, local residents and activists held a demonstration and prayers at the site. The arrival of many people caused the settler-colonists’ equipment working there to run off, and work was ceased. On Sunday, May 9, once again heavy equipment belonging to the settler-colonists was noted working there but ceased when forces of army and police were summoned.

***
Attacks by settler-coloonists backed up by the occupation forces were noted this week in other areas of the Occupied Palestinian Territories. On Monday, settler-colonists invaded the villages of Qusra and Jaloud in the Nablus district, threw stones at homes and vehicles, and ignited grain fields. Soldiers arriving on the scene fired teargas at the attacked Palestinians, and beat up those who tried to get their families out of vehicles attacked by stones, or protect their land. 11 Palestinians who were attacked were arrested by the occupation forces, and at least 4 wounded. No arrests were reported among the assailant settler-colonist gangs.
On the night between Tuesday and Wednesday, it was reported that settler-colonists ignited Palestinian fields near the village of Bourin (Nablus district), attacked a house with stones and physically vandalized a boy who then needed medical care. In this case, just as in all settler-colonist harassment quite some time, it was reported that soldiers accompanied the vandals, firing teargas and rubber ammunition at Palestinians who tried to protect their family members or property or put out fires.

This entry was posted on Sunday, May 9th, 2021 at 19:44 and is filed under Activities, Activity Spotlight, English. You can follow any responses to this entry through the RSS 2.0 feed. Both comments and pings are currently closed.