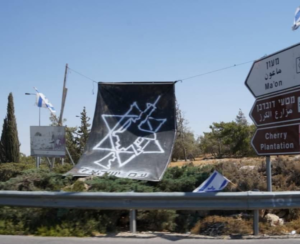 * photo: Demonstration of ‘Jewish Power’ at the entrance to ‘Maon’ colony, South Hebron Hills, July 29, 2022 South Hebron Hills The occupation forces are now systematically harassing the Palestinian inhabitants of the ‘firing zone’ that has been declared throughout Masafer Yatta, meaning to cause their transfer from this area, with the backing of the Israeli Supreme Court. Thus, this week too, community members here were detained at the army’s roadblocks, their vehicles confiscated, and houses and farming structures demolished. This takes place alongside military and police backing up of […]
Continue

Posted in Activities, Activity Spotlight, English | Comments Off on This week – July 24-30, 2022 – in the Occupied Territories

Saturday, July 30 2022 This week – July 10-16, 2022 – in the Occupied Territories All families in the Ras A-Tin community abandoned their village, harassed by Jewish terrorists who assaulted them with violence, arson, and damages to their property; Another Palestinian family deserted its home near Tayibe Junction due to colonists’ violence; Explosions in Masafer Yatta in the course of military maneuvers there – the court has instructed the State to detail ‘safety measures’ taken to prevent injury to local inhabitants; Dozens of colonists took over lands near Bani Na’im, while the Israeli army prevented access of protesting Palestinian inhabitants by firing teargas and […]
Continue

Posted in Activities, Activity Spotlight, English | Comments Off on This week – July 10-16, 2022 – in the Occupied Territories

Saturday, July 23 2022 This week – July 17-23, 2022 – in the Occupied Territories Colonists erected new outposts opposite Kiryat Arba, on Hill 26 and near the Palestinian village of Umm Al Kheir in the South Hebron Hills; New construction and earth works by colonists have also taken place near Susya and Tawane; Soldiers stood watch to protect colonists from the terrorist outpost ‘Havat Maon’ while the latter held a noisy night picnic near a Palestinian home in Tawane; 90 residents of the Silwan neighborhood (east Jerusalem), among them elderly people and babies, were hurt by teargas fired into homes during a raid by […]
Continue

Posted in Activities, Activity Spotlight, English | Comments Off on This week – July 17-23, 2022 – in the Occupied Territories 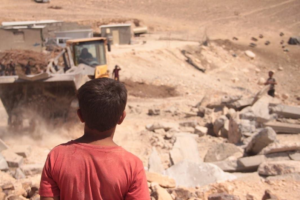 A colonist gang escorted by the Israeli army set fire around the community of Ras A-Tin (Palestinian Jordan Valley), then destroyed tents and shacks – several terrified families prepared to leave immediately, but, supported by activists, they remain on site; Bullets hit a Palestinian home in Khalat A-Dab’a during the army’s maneuvers in Masafer Yatta; Soldiers shackled, beat up and kidnapped a sick Palestinian near a clinic in the South Hebron Hills; Right-wing thug Rami Ben Yehuda violently attacked a Sheikh Jarrah inhabitant on crutches, causing him severe injury; A […]
Continue

Posted in Activities, Activity Spotlight, English | Comments Off on This week – July 3-9, 2022 – in the Occupied Territories

Thursday, May 12 2022 An urgent message from the South Hebron Hills Please help us spread this urgent call to stop the expulsion of Palestinian communities from Masafer Yatta: On May 4, 2022, the eve of Israel’s Independence Day, the Israeli Supreme Court, in session as the High Court of Justice, issued a ruling allowing the State to destroy eight Palestinian villages in the area of Masafer Yatta in the South Hebron hills, and to expel their inhabitants permanently. This ruling is a travesty of justice, an act of extreme judicial cruelty, and a severe blow to basic, universal human values and […]
Continue

Posted in Activities, Activity Spotlight, English, Issues and Facts, Pressing Issues | Comments Off on An urgent message from the South Hebron Hills

Saturday, April 23 2022 April 22, 2022. ‘Auja. Text: David Shulman Abu Isma‘il calls at 7 in the morning, in a panic. Four or five settlers are lined up to block the shepherds’ path to their grazing grounds. What to do? Still half-asleep, I make some phone calls and learn that two of our activists are on their way. I let Abu Isma‘il know. I can hear the relief in his voice. In the end he and the other herds take a long, roundabout way into the hills, and the sheep get to eat their fill. Enough for one day. Read […]
Continue

A day in wet mud: cold, slippery, squeaky, clammy, squishy. Mud, they say, is the mother of all life. You sink into it as soon as you set foot in Umm al-Khair. In an instant your shoes are encrusted with dark brown slime that is upwardly mobile; soon your legs, pants, socks are caked with it as well, freezing layer pasted on layer. You slither and slip your way along. The freezing drizzle stops for a moment, I fold my umbrella, somehow it falls from my hand; I pick it […]
Continue